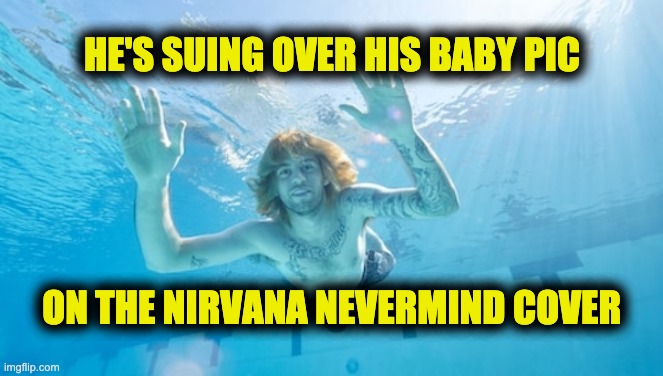 Clothes make the man. Naked people have little or no influence on society.— Mark Twain

Before it was famous for overpriced coffee and political rioters, the city was known as the birthplace of the Seattle sound known as ‘grunge,’ with none more famous than Nirvana. Nirvana Nevermind album cover

In 2014, Nirvana was inducted into the Rock & Roll Hall Of Fame.

But now, one plaintiff hopes the same album that launched them to stardom could lead them to one of the few kinds of infamy rebellious rockers would never willingly embrace. The label of child pornographers.

The album that started their journey, for anyone who may not remember, was ‘Nevermind.’ 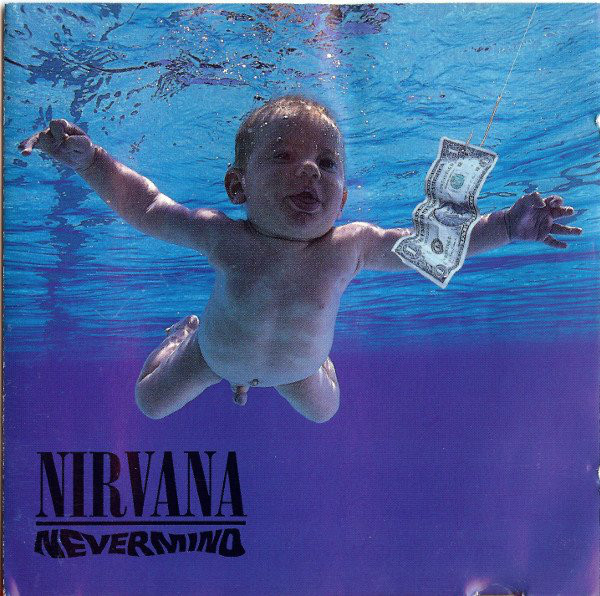 Thirty years later, the kid on the cover is grown, and he is all lawyered up. 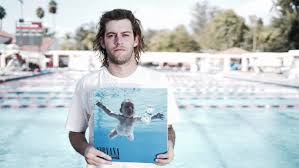 Spencer Elden, the man whose unusual baby portrait was used for one of the most recognizable album covers of all time, Nirvana’s “Nevermind,” filed a lawsuit Tuesday alleging that the nude image constituted child pornography.

The album cover depicts Elden underwater in a swimming pool as a then-infant with his genitalia exposed. The image has generally been understood as a statement on capitalism, as it includes the digital imposition of a dollar bill on a fishhook that the baby appears to be enthusiastically swimming toward. Non-sexualized nude photos of infants are generally not considered child pornography under law.

The case the lawyer has been making is that the dollar bill on the fishhook is, in fact, sexualizing the photo.

Instead of being treated as a rebuke of capitalism, Elden thinks the nude baby ‘chasing money’ portrays the kid as a ‘sex worker,’ which would take it outside the ‘non-sexualized” protections, especially if one is trying to get money from the album thirty years later.

The fish hook with a dollar bill was later added digitally to the image for the cover. The shoot lasted 15 seconds, and Elden’s parents made only $200, his dad told NPR in 2008.

The cover art subject — who, like the “Nevermind” album itself, is now 30 — is asking at least $150,000 from each of the defendants, who include surviving band members Dave Grohl and Krist Novoselic; Courtney Love, the executor of Kurt Cobain’s estate; Guy Oseary and Heather Parry, managers of Cobain’s estate; photographer Kirk Weddle; art director Robert Fisher; and a number of existing or defunct record companies that released or distributed the album in the last three decades.

Curiously, original Nirvana drummer Chad Channing is also named as a defendant who was part of the group at the time, even though he had been replaced by Grohl in 1990, before the album was recorded or the cover photography shot. [The techical term is double dipping].

…What was a constant, in the past as now, is that Elden has said he was never compensated for the photo beyond the $200 his parents were paid for it on the day of the shoot. In previous interviews, he’s said he tried to get in touch with Grohl and Novoselic, on a friendly basis, but never got a reply. A possibly new contention in the lawsuit is that Elden’s parents never even signed paperwork allowing any use of the image.

The deep irony of the kid on this album cover coming back 30 years later, looking to cash in on a payday, was not lost on social media.

He repeated the picture in 2016, although without the dollar bill and thankfully with pants.

When he took the 2016  picture, he seemed to express bitterness about not becoming rich from the use of his picture in an interview with Time Magazine:

Today, Elden lives in Los Angeles with his mother and focuses on making art and growing tomatoes. Over the past few years, his interest in art has developed after he interned for street artist Shepard Fairey, who has acted as a mentor. But Elden is still trying to figure out how he feels about Nevermind. “It’s a trip. Everyone involved in the album has tons and tons of money. I feel like I’m the last little bit of grunge rock,” Elden says, “I’m living in my mom’s house and driving a Honda Civic.”

(…)Frustrated about never receiving any sort of compensation for Nevermind, Elden recently looked into pursuing legal action against Geffen Records, but was unsuccessful. “It’s hard not to get upset when you hear how much money was involved,” he says. (Nevermind has sold over 30 million copies worldwide.) “[When] I go to a baseball game and think about it: ‘Man, everybody at this baseball game has probably seen my little baby penis,’ I feel like I got part of my human rights revoked,” says Elden.

Sorry Mr. Elden, but the only time people know that it’s your little baby penis is when you make it an issue—unless it hasn’t grown since 1991 (I don’t want to know).