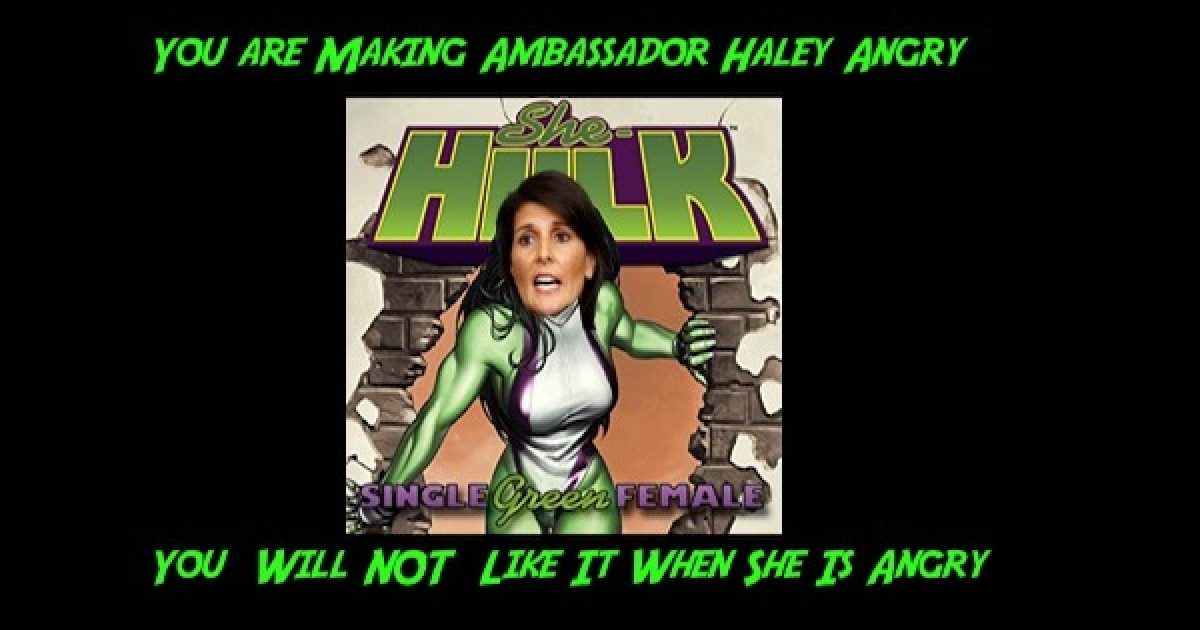 On Thursday the UN General assembly voted on a resolution condemning  President Trump’s decision to recognize Jerusalem as the capital of Israel and move the U.S. Embassy to Israel’s capital,

American U.N. Ambassador Nikki Haley was not happy about the resolution, warning the international body two days before the vote and again on the day of the vote.

And to make her point even stronger she sent this letter to our “friends” in the UN: 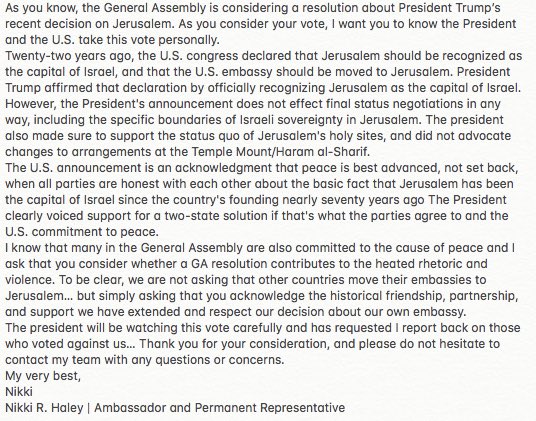 Isn’t it nice to have a foreign policy with some backbone? Make no mistake about it, her threat is not really about Israel and Jerusalem, she is telling the UN that the US makes its own foreign policy and no international body can tell us what to do, and two days later Haley addressed the General Assembly making her point even stronger.

Just before General Assembly voted on Thursday Ambassador Haley gave the strongest UN speech by an American since 1975 when Daniel Patrick Moynihan railed against the General Assembly for their Zionism is Racism resolution.

Unlike 1975, this time the UN’s target was the United States and Haley went all out to defend her country demonstrating to the international body that the weak-kneed Obama team is gone:

Standing here today, being forced to defend sovereignty and the integrity of my country – the United States of America – many of the same thoughts have come to mind. The United States is by far the single largest contributor to the United Nations and its agencies. We do this, in part, in order to advance our values and our interests. When that happens, our participation in the UN produces great good for the world. Together we feed, clothe, and educate desperate people. We nurture and sustain fragile peace in conflict areas throughout the world. And we hold outlaw regimes accountable. We do this because it represents who we are. It is our American way.

In the case of the United States, we are asked to pay more than anyone else for that dubious privilege. Unlike in some UN member countries, the United States government is answerable to its people. As such, we have an obligation to acknowledge when our political and financial capital is being poorly spent.

Instead, there is a larger point to make. The United States will remember this day in which it was singled out for attack in the General Assembly for the very act of exercising our right as a sovereign nation. We will remember it when we are called upon to once again make the world’s largest contribution to the United Nations. And we will remember it when so many countries come calling on us, as they so often do, to pay even more and to use our influence for their benefit.

America will put our embassy in Jerusalem. That is what the American people want us to do, and it is the right thing to do. No vote in the United Nations will make any difference on that.

But this vote will make a difference on how Americans look at the UN and on how we look at countries who disrespect us in the UN. And this vote will be remembered  (a video of he speech is below).

Later the General Assembly passed its rebuke of the United States, but it was clear Haley’s two days or pressure depressed the number of votes for the resolution. In the days before it was predicted the resolution would get well over 150 yes votes. But in the end, there were only 128 votes in favor, 9 against, 35 abstentions and another 21 countries were so frightened they didn’t even show up.

At first Nikki Haley’s appointment to the UN Ambassador role, was kind of shocking. There was really no indication that she had a strong backbone, especially when one considers how fast she changed her mind, conceding the removal of the Confederate Flag from state grounds when she was governor of South Carolina. But since Ms. Haley became our Ambassador and Permanent Representative to the United Nations, she has shown herself to be a powerful advocate for the United States. She has strongly condemned the UN for its Antisemitism, Russia for its Support of Syria’s attacks on its civilians, China over Korea, just to name a few examples.

Haley demonstrates the Trump administration’s YUGE change from the way the Obama administration dealt with the UN. During the Obama eight years, when the UN would say jump and Obama, his secretary of state, and his UN ambassador would ask how high on the way up.

Part of making America great again is not allowing other nations to push us around.  Through Ambassador Haley, President Trump warned other that we are no one’s vassal state. If he follows through on the threats (and I believe he will), this POTUS will have thrown “lead from behind” out the window and reestablished the United States as the leader of the free world. Or as he might say, he is making America Great again.