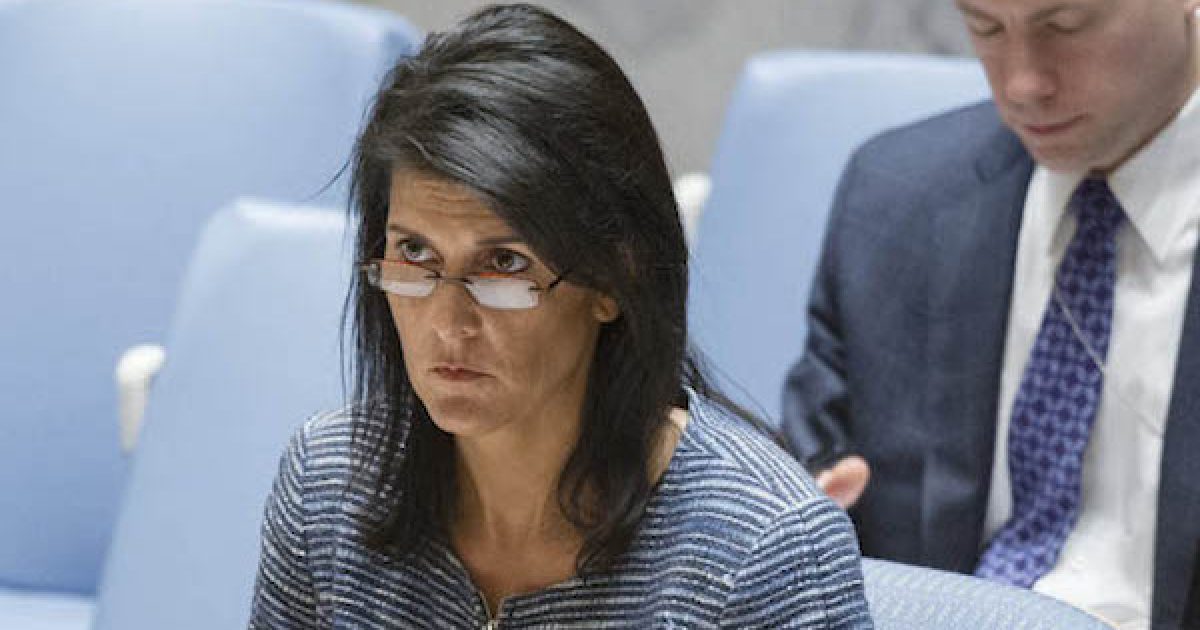 U.S. Ambassador to the UN Nikki Haley is having the week of her career, and inspiring many patriotic Americans while she’s at it.

Haley has an undoubtedly difficult job.  Her role as a liaison between the increasingly populist Trump administration and the evermore globalism-based United Nations puts the ambassador between a rock and a hard place.  Filled with glass.  And bees.  Barefoot.

In other words, it’s not a very glamorous gig, but Haley has been an absolute and unequivocal rockstar in recent days thanks to her mic-dropping moments on the floor of the General Assembly.

It all began with President Trump’s decision to move the U.S. embassy in Israel from Tel Aviv to Jerusalem, making a de facto declaration of America’s recognition of the holy city as the Capital of Israel.  This has predictably angered the non-Christian world, including the nearby Palestinians and their pals in the caliphate, who would much rather see Israel wiped off the map completely.

In defense of this move, Nikki Haley has been on a warpath with the U.N., doling out punishing reminders to the General Assembly of America’s generosity and clout within the globalist organization.  After the petulant posse of nations decided to continue bristling at the firebrand of an ambassador, Haley then dropped another bombshell:  She’s cutting them off.

“Nikki Haley, United States Ambassador to the United Nations (U.N.), announced Sunday night that the federal government has reduced its contribution to the U.N.’s annual budget by 285 million dollars.

“‘Today, the United Nations agreed on a budget for the 2018-2019 fiscal year. ‎Among a host of other successes, the United States negotiated a reduction of over $285 million off the 2016-2017 final budget. In addition to these significant cost savings, we reduced the UN’s bloated management and support functions, bolstered support for key U.S. priorities throughout the world, and instilled more discipline and accountability throughout the UN system.’

“’The inefficiency and overspending of the United Nations are well known. We will no longer let the generosity of the American people be taken advantage of or remain unchecked. This historic reduction in spending – in addition to many other moves toward a more efficient and accountable UN – is a big step in the right direction. While we are pleased with the results of this year’s budget negotiations, you can be sure we’ll continue to look at ways to increase the UN’s efficiency‎ while protecting our interests,’ said Ambassador Haley.”

Nikki Haley’s unenviable task has quickly become a stage for the rising star, whose stern and patriotic actions have infused a bit of action into the otherwise stuffy organization, and signaled to the world that the United States is back to doing what the United States does.

To those who still wish to stand in the way of Nikki Haley, we wish them all the luck in the world.