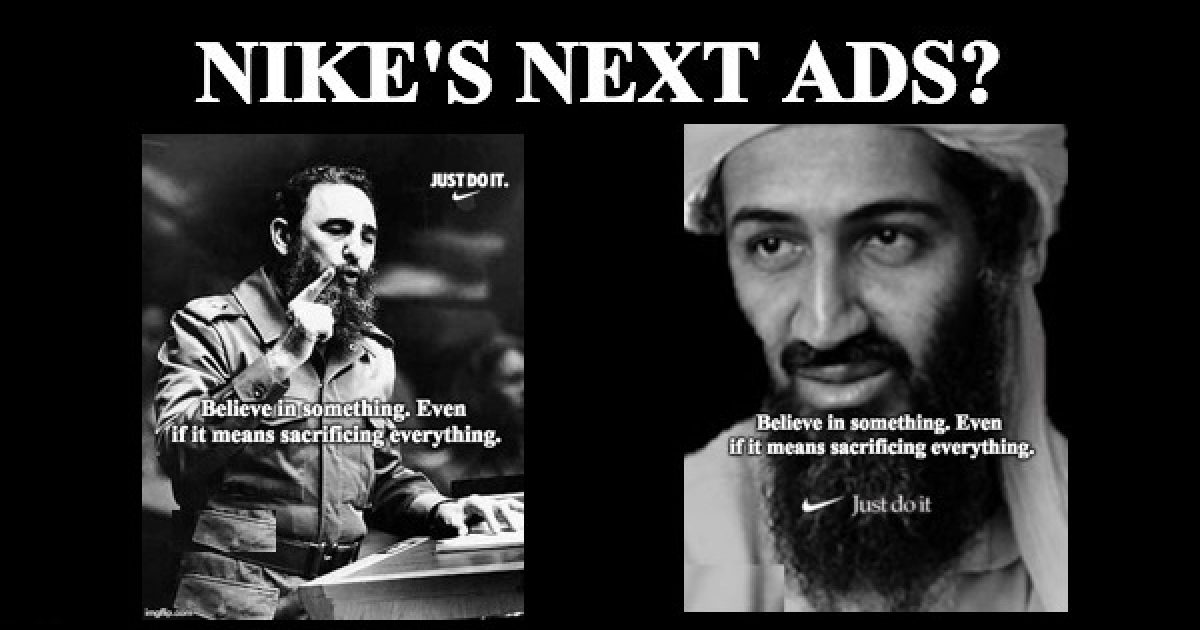 On Monday, Colin Kaepernick tweeted that he would be featured in a new ad campaign by Nike.  News of the ad angered many, who said they would boycott the company as a result.

Believe in something, even if it means sacrificing everything. #JustDoIt pic.twitter.com/SRWkMIDdaO

Gee Colin Kaepernick said his efforts were all about disrespecting the flag, Is that what Nike thinks?

Despite what we hear from the mainstream media, the mediocre quarterback Colin Kaepernick, the protest was all about disrespecting the flag of the racist evil nation that he believes we are.

Following the announcement, the hashtags #BoycottNike and #JustBurnIt started trending on Twitter. Some angry consumers even posted photos and videos of themselves burning their Nike shoes and other gear to protest the company using the divisive figure in its 30th anniversary ad campaign.

The fallout was no surprise but Nike may be betting that the upside of a Kaepernick endorsement is worth angering conservative Americans and supporters of President Donald Trump. Kaepernick — who sparked a movement among professional athletes when he began taking a knee in 2016 during the anthem to protest police brutality against African Americans — is embroiled in a lawsuit against the National Football League and accuses it of blacklisting him.

.@Nike Due to your support of C.K. in your coming adds, I as an American can no longer support your company. #boycottNike #IStandForOurFlag pic.twitter.com/5JxSMD8SSO

Under Armour is a great American company that supports our military. So F*ck You Nike! I’ll never buy any of your poorly mad apparel again. #boycottnike

Liberals do this all the time

Time to give them a taste of their own medicine #BoycottNike

If U own it sell it
HIT THEM IN THE WALLET
FOR R
THIS SLAP IN THE FACE OF MAKING
ANTI AMERICAN
THE FACE OF @NIKE pic.twitter.com/GwPSCTNFja

Colin Kaepernick made a guaranteed $39 million in the NFL. Now he’s pocketing more money in a Nike ad because he knelt on a football field. That’s “sacrificing everything?!” Disrespectful to our military members who’ve truly sacrificed everything. pic.twitter.com/wT7L0XSZX9

Multiple pairs of @Nike going in the trash. I will not waste my money on a company who’s spokesperson is anti-America. #BoycottNike #nikehatesamerica

This Marine veteran/Country Music Star made his feeling known by cutting the Nike logo off his socks:

Our Soundman just cut the Nike swoosh off his socks. Former marine. Get ready @Nike multiply that by the millions. pic.twitter.com/h8kj6RXe7j

Another person posted this video:

Even Geraldo Rivera weighed in:

Hey Nike, this is what it looks like to sacrifice everything. These men sacrifice their very lives so Collin has the freedom to disrespect our flag & our country. can’t figure out who is a bigger disgrace Collin or Nike for glorifying this nonsense. never buy Nike products again! pic.twitter.com/uiA5g1C7Ds

Ripping my Nike Air Max to own the libs #BoycottNike pic.twitter.com/FYzpNoZiHX

But, Bloomberg said, “the shoe giant is likely counting on passions to cool.”

“The long-term relationship and a contract that benefits both parties over the next 10 years will likely outweigh any current controversy,” Bloomberg Intelligence analyst Chen Grazutis said.

Funny how the media and Nike ignore the fact that Kaepernick first became a free agent because he turned down his team’s (the 49ers) offer of a backup QB job.  And during last season we learned that Kaepernick turned down offers from NFL teams it maintains his misguided position on top of the victims of racism list.

Translation: To hell with patriotic Americans