One Down Two To Go 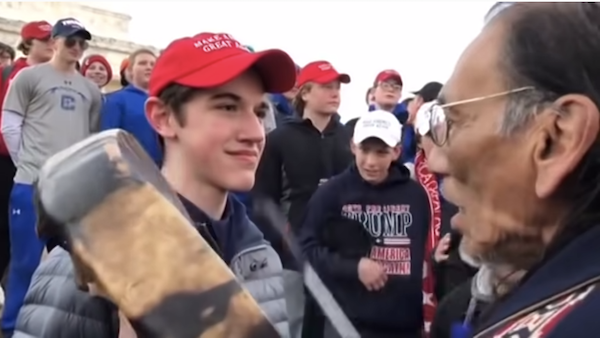 On Tuesday, CNN agreed to settle Covington Catholic student Nick Sandmann’s lawsuit. The amount CNN agreed to pay Sandmann was not made public, and it is doubtful it will ever be. The initial suit asked $75 million for harm to Sandmann’s reputation and $200 million in punitive damages. He still has two more lawsuits, against NBC Universal ($275 million) and the Washington Post ($250 million) Neither of those lawsuits has court dates as of yet. Nick Sandmann

Per Channel 19 TV in Cincinnati, Sandmann’s attorney, Lin Wood, said, “This case will be tried not one minute earlier or later than when it is ready.”

Yes, We settled with CNN.

The now-famous showdown between students from Covington Catholic High School and a Native American man occurred on January 18, 2019, at the Lincoln Memorial during the March for Life rally. Initially, a short video was released that seemed to show Native American activist Nathan Philips being taunted by Sandmann and his Covington High classmates. And it appeared that Nick Sandmann was smirking at Philips as the stood almost nose to nose.

The MSM, politicians, church officials, commentators, & celebrities rushed to judgment to wrongfully condemn, threaten, disparage & vilify Nick Sandmann based solely on that out of context cut video. Sandmann was wearing a MAGA hat, which is probably the reason why the MSM was so fast to condemn him.

The first video and Philips’ story was thoroughly discredited once a more extended version of the incident video was found and released. The extended video showed the kids from Covington were not moving in on and taunting Philps.  Philips was moving in on the Students who themselves being taunted with racist and homophobic slurs by a different group at the Lincoln Memorial that day, The Black Hebrew Israelites. Nick Sandmann was seen keeping a straight face and not talking as not to inflame the situation.

Per Channel 19 TV in Cincinnati Sandmann’s Attorney Wood said the damages were sought due to:

“emotional distress Nicholas and his family suffered.” He also said the family had to move from their home temporarily and that Nicholas was not permitted to attend school directly after the trip to Washington.

And there’s more to come:

A lawsuit is expected to be filed against Phillips, Wood said. He indicated that lawsuit would seek $5 million, but the judge said that Phillips does not have as much money as the other defendants.

They also plan to sue Gannett, owners of The [Cincinnati] Enquirer, according to Wood.

He said he will bring that to the judge in the next 60 days.

Attorneys say the money they’re seeking is not designed to compensate Nick, but to “deter the defendants” from doing the same thing (that they’re accused of) in the future.

I am rooting for Sandmann to win all of his lawsuits, especially those against the media. They should be punished for their bias, and perhaps losing a load of money will teach them they should report fairly the news.  Not via their anti-conservative mindset without pushing the fake liberal narratives.