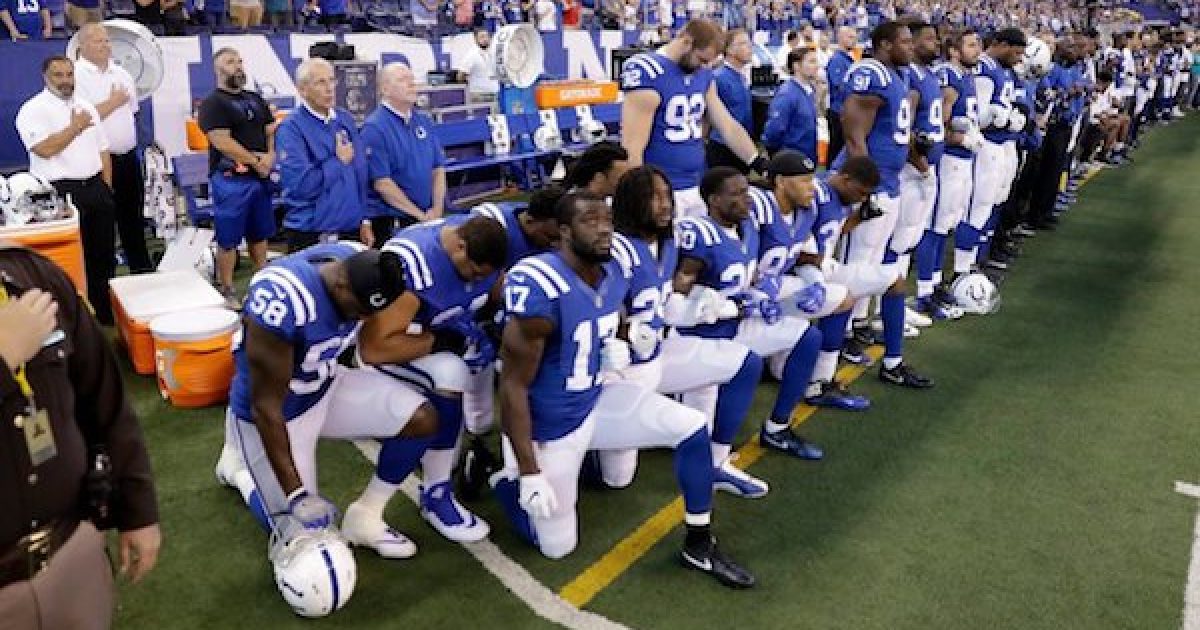 This was written by a friend of a friend named Bob Tollison who asked for it to be shared. As you read it — you will shake your head in agreement. Please read this all the way through especially because, at the end, I’ve added information about how you may be able to convince one major advertiser to drop the NFL until they start respecting the flag.

An open letter to the NFL players,

You graduated high school in 2011.  Your teenage years were a struggle.  You grew up on the wrong side of the tracks.  Your mother was the leader of the family and worked tirelessly to keep a roof over your head and food on your plate.  Academics were a struggle for you and your grades were mediocre at best. The only thing that made you stand out is you weighed 225 lbs and could run 40 yards in 4.2 seconds while carrying a football.   Your best friend was just like you, except he didn’t play football.  Instead of going to football practice after school, he went to work at McDonalds for minimum wage.  You were recruited by all the big colleges and spent every weekend of your senior year making visits to universities where coaches and boosters tried to convince you their school was best.  They laid out the red carpet for you. Your best friend worked double shifts at Mickey D’s.  College was not an option for him.  On the day you signed with Big State University, your best friend signed paperwork with his Army recruiter.  You went to summer workouts.  He went to basic training.

You spent the next four years living in the athletic dorm, eating at the training table. You spent your Saturdays on the football field, cheered on by adoring fans.  Tutors attended to your every academic need.  You attended class when you felt like it. Sure, you worked hard.  You lifted weights, ran sprints, studied plays, and soon became one of the top football players in the country.  Your best friend was assigned to the 101st Airborne Division. While you were in college, he deployed to Iraq once and Afghanistan twice.  He became a Sergeant and led a squad of 19-year-old soldiers who grew up just like he did.  He shed his blood in Afghanistan and watched young American’s give their lives, limbs, and innocence for the USA.

You went to the NFL combine and scored off the charts.  You hired an agent and waited for the draft day.  You were drafted in the first round and your agent immediately went to work, ensuring that you received the most money possible. You signed for $16 million although you had never played a single down of professional football.  Your best friend re-enlisted in the Army for four more years. As a combat-tested sergeant, he will be paid $32,000 per year.

You will drive a Ferrari on the streets of South Beach.  He will ride in the back of a Blackhawk helicopter with 10 other combat loaded soldiers.  You will sleep at the Ritz.  He will dig a hole in the ground and try to sleep.  You will “make it rain” in the club.  He will pray for rain as the temperature reaches 120 degrees.

On Sunday, you will run into a stadium as tens of thousands of fans cheer and yell your name.  For your best friend, there is little difference between Sunday and any other day of the week.  There are no adoring fans.  There are only people trying to kill him and his soldiers. Every now and then, he and his soldiers leave the front lines and “go to the rear” to rest.  He might be lucky enough to catch an NFL game on TV.  When the National Anthem plays and you take a knee, he will jump to his feet and salute the television.  While you protest the unfairness of life in the United States, he will give thanks to God that he has the honor of defending his great country.

To the players of the NFL:  We are the people who buy your tickets, watch you on TV, and wear your jerseys.  We anxiously wait for Sundays so we can cheer for you and marvel at your athleticism. Although we love to watch you play, we care little about your opinions until you offend us. You have the absolute right to express yourselves, but we have the absolute right to boycott you.  We have tolerated your drug use and DUIs, your domestic violence, and your vulgar displays of wealth.  We should be ashamed for putting our admiration of your physical skills before what is morally right.  But now you have gone too far. You have insulted our flag, our country, our soldiers, our police officers, and our veterans. You are living the American dream, yet you disparage our great country.  I am done with NFL football and encourage all like-minded Americans to boycott the NFL as well.

The National boycott of the NFL for Sunday, November 12th, Veterans Day Weekend. Boycott all football telecast, all fans, all ticket holders, stay away from attending any games, let them play to empty stadiums. Pass this post along to all your friends and family. Honor our military, some of whom come home with the American Flag draped over their coffin.

Anheuser-Busch has provided a phone line that allows you to call in and give your opinion on the current state of affairs in the NFL of players kneeling during our National Anthem. Based on the feedback they receive, Anheuser-Busch will strongly consider pulling their sponsorship from the league. On Monday this line went down temporarily due to an extremely high call volume. If you have an opinion on the issue call in and make it known, every voice matters!