Newsweek Article Says 2016 Election Can STILL Be Given To Hillary 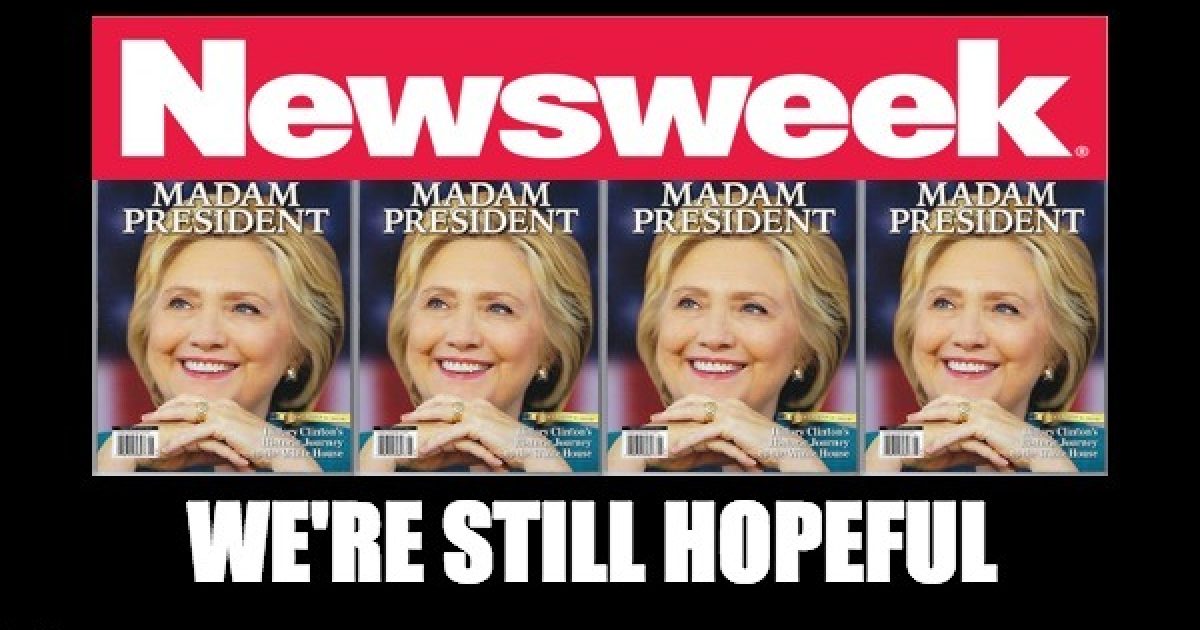 No folks, this isn’t a joke. Just short of a year since Donald Trump was inaugurated as president, Newsweek Magazine published an article claiming that it’s still possible for the election to be overturned and Hillary Clinton installed as POTUS. Perhaps they waited until Jan. 18th  so they can qualify for next year’s fake news awards.

The scenario is that the Russian collusion story is proven true, both Trump and Pence are either impeached or forced to resign and instead of Paul Ryan moving to the White House as the next in line, he says something like, “you know it really should be Hillary:”

Lawrence Lessig, the Roy L. Furman professor of law and leadership at Harvard Law School, penned an essay for Medium in October outlining a series of hypothetical scenarios that could take place should the ongoing probe find that the Trump campaign actually conspired with Russia to influence the results of the election.

If Trump did conspire with Russia, the president “should resign, or, if he doesn’t, he should be impeached,” Lessig wrote in his essay. Vice President Mike Pence would also have to either resign or get impeached, which would make House Speaker Paul Ryan the president of the United States, Lessig wrote at the time.

Given that there is “no mechanism in American law for a new election,” nor “a mechanism for correcting the criminal results of the previous election,” Ryan ought to nominate “the person defeated by the treason of his own party, and then step aside, and let her become President,” Lessig went on to say.

On Wednesday, Lessig told Newsweek this scenario was still a possibility. Sure and there is still a possibility for the NY Jets to be in this year’s Super Bowl, Nancy Pelosi to give “crumbs” from her own pocket to people working for companies not give $1K bonuses, yours truly to grow hair on the top of his head, and CNN’s Jim Acosta to be professional.

“This is one way it could happen,” Lessig said. “But that’s very different from saying I think it will happen, or should happen, or [that] the evidence is there for it to happen.”

Since the essay was published, there hasn’t been “any evidence that’s come out that’s resolved the question, whether there was some conspiracy to steal the election,” the professor said.

“I don’t feel that we’ve seen anything that increases that probability,” he added.

If evidence that Trump and his team conspired to steal the election did emerge in the future, however, the president would have to step down, Lessig maintained.

Sorry, but I cannot comprehend a fighter like Pres. Trump resigning. More importantly,  from all the information about the investigations seen so far, that will not be necessary.

“Absolutely, he’s got to resign, and if he doesn’t resign, then absolutely Congress needs to impeach him,” he said of the hypothetical situation.

Here’s the end of that hypothetical situation, after Ryan gives the presidency to Hillary, the DOJ finishes the investigation into the Clinton foundation and pay for play, and she becomes the first sitting president to be tossed in jail.

Lessig noted that the hypotheticals he wrote about in his essay would apply to only the specific scenario he described.

Obviously, Newsweek believes it was stolen or they wouldn’t have published such an idiotic story.  Perhaps it’s time for the once important newsweekly to pull itself out of the darkness and stop lamenting Ms. Clinton’s loss, especially if it wants to hold on to the small audience it still may have.