Anti-Trump MSM At Its Nastiest: Newseum’s “President & The Press Event” 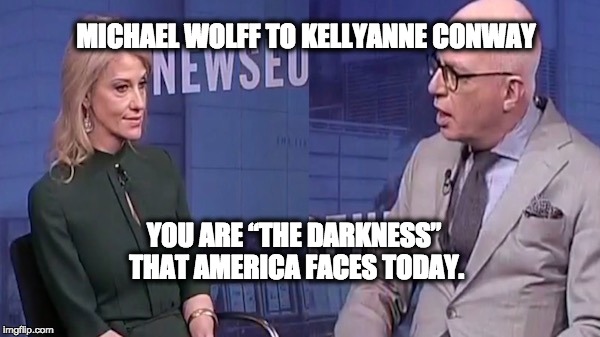 On Wednesday journalists and other members of the mainstream media establishment gathered together at the Newseum in Washington, D.C. Ostensibly, they were supposed to be discussing free speech in the modern age but instead much of the event seemingly devolved into a day of Trump bashing.

For example, one of President Trump’s closest aides, Kellyanne Conway sat down with the Hollywood Reporter’s Michael Wolff where she was almost immediately accosted with a no-win question. Wolff in an effort to learn about what it “feels” like to work in the Trump White House, accidentally (or maybe not) asked a question which implied that Conway and her team were “the darkness” that America faced today.

Conway: How personal — how personally do I take what?

I’m here — look, I’m not elected to anything…

I think there is something that I call presumptive negativity. And you can look at something and see it as a positive or as a negative. I think there are some print journalists, particularly, who have taken the time to really try to get to know this president, and how he operates and who he is, and maybe some of the senior administration officials, and they’re doing much better, in my view, of covering the White House and just doing their jobs covering the White House.

I don’t know that folks have really taken a step back and said OK, I missed a lot in the election obviously. They should say — they say I really got it wrong, I — which means I also didn’t really understand what was happening in the country.

Another example of the bias implicit in the days events came from Bob Schieffer, supposedly a moderate and unbiased newsman of the “old school.” Sadly, this illusion was immediately stripped away when Schieffer argued that the media gave Trump and his team “too much credit” and “credibility” throughout the campaign. This would seem to imply that Schieffer thinks President Trump and the people he has working for him are “not credible” which would say a lot about how he feels about this administration. Did Schieffer ever say that the media gave “too  much credit” to the immoral cabal that was the Obama administration?

My own belief, opinion clearly stated, is that Trump because he played by new rules. He broke all the old rules and his opponent played by the old rules. He understood, and this is sort of obvious in retrospect — but as Sherlock Holmes said, most things are obvious in retrospect. He understood that if he offered himself to enough television programs he would be invited to be on to some of them. And that is precisely what happened.

I disagree with those who say the hosts didn’t push back. They pushed back many times. But he was going on so many programs so often that the exposure overwhelmed the pushback. While people were pushing back on something he said yesterday, he was already on another program laying out new allegations.

Whether he knew it or not, he was practicing the political strategy that was first identified by an Australian political consultant named Lynton Crosby. He called it the ‘dead cat theory.’ And the way that works is no matter what the conversation people are having at a dinner party if you threw a dead cat in the middle of the table the conversation turns to the dead cat. Donald Trump threw cats dead and alive on the table. Every time the narration went this way and suddenly the attention was back to what he was talking about and was on him.

You can see Schieffer’s full speech and Conway’s full interview below: