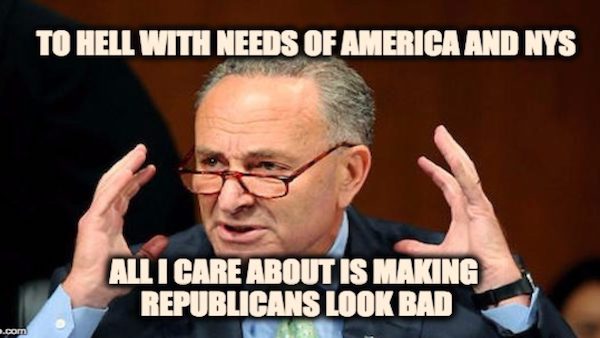 In the six months since Donald Trump was inaugurated,  it’s become painfully obvious that along with not knowing that a pair of glasses do not belong at the tip of one’s nose, Senate Minority Leader Chuck Schumer is making his decisions based on politics, rather than what’s good for the United States or his constituents in New York.  As a result (according to the latest Sienna poll) Schumer’s favorability ratings among NY voters are at the lowest level ever.

While 53% is pretty good for a favorability rating when one looks at the fact that it was at 67% only eight months earlier, team Schumer must be getting a bit concerned.

NY’s other senator, Kirsten Gillibrand (who voted for the Iran deal which was rejected by most New York Voters) should be concerned also, not because of a lack of favorability, but because when asked 33% of NY voters had now opinion. This leaves the NY GOP (if they ever get their act together) and opportunity to find a good candidate and define  Gillibrand  before she defines herself.

Part of the reason for the Schumer fall-off is his obsession with Russia. New Yorkers are beginning to suffer from Russki overload. While they are concerned the reported Russian attempt to sway the 2016 presidential election, that number is inching downward. It now stands at 64%, down slightly from the 68% two months ago.  Where you see the real trend is when Sienna asked about the , er..I mean the Russian investigations.

In May 68% of NY voters believed, “federal authorities should conduct a thorough investigation into Russian involvement in last year’ s presidential election until its conclusion, and 31% thought that, ” Russian involvement in last year’s presidential election has been investigated enough, it’s time to move on to other issues.” Only two months later, the percent of voters looking for a thorough investigation dropped to 56% and the percent who believe it’s time to end the investigation and move on rose to 41%

By a 64-35 percent margin, voters say they’re concerned about Russia’s attempt to sway last year’s election, down a little from 68-31 percent in May. And while 56 percent want a thorough investigation concluded, down from 68 percent in May, 41 percent say it’s been investigated enough, up from 30 percent.