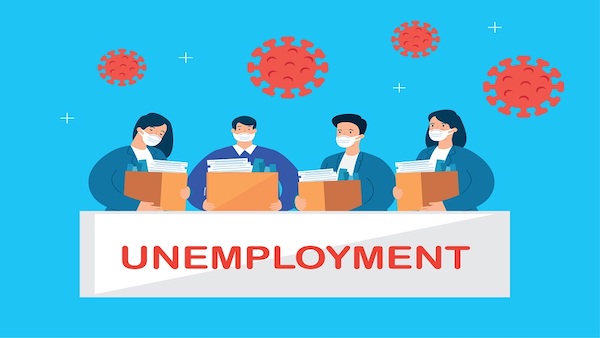 16.4 million jobs have been recovered since April when labor markets bottomed amid the state-led Covid pandemic economic shutdowns, according to the latest data from the Bureau of Labor Statistics.

But with COVID cases once again on the upswing as the cold and flu season kicks into higher gear — about 166,000 confirmed new cases daily, and then the Institute for Health Metrics and Evaluation reports 255,000 probable new cases daily when projected asymptomatic cases are factored in — states appear ready to go right back into shutdown mode.

In New York, for example, where 484,000 remain on unemployment after peaking at 1.87 million in May, Democratic Governor Andrew Cuomo, who wrote a book about how wonderfully he’s handling the COVID crisis, is already urging more restrictions as confirmed cases in the state have once again reached more than 5,000 on Nov.13 and Nov. 14, and probable cases are said to be about 8,600. The peak in March was projected to be nearly 120,000 probable cases.

In his Nov. 14 update to New Yorkers, Cuomo stated, “Will we shut down and will we have more restrictions? What has worked for New York from day one is it’s a pure consequence of science. There’s no political decision making, no ideological decision making. Look at the numbers, and if the numbers are increasing and if they’re not slowing, then you have to restrict activity.”

No Politics? Governor Andy, you are full of crap.

Cuomo’s latest shut down rules orders bars and restaurants–any businesses with a liquor license to close indoor and outdoor dining nightly at 10 p.m. Now that’s a piece of science I never read about.  The CORONA virus wears a  watch and knows to only come out after 10pm.

So, get ready. The lockdowns are coming again.

And former Vice President Joe Biden, currently leading in the counting of ballots amid ongoing legal challenges from President Donald Trump, should he prevail when states certify their election results, he may be inheriting an economy once again falling into recession. Not because of something President Trump is doing–but because governors are forcing their states to shut down again.

Biden once again warned of a “very dark winter” on Nov. 16 and urged economic support measures by Congress to once again compensate for another downturn: “We’re going in a very dark winter. Things are going to get much tougher before they get easier. And that requires sparing no effort to fight COVID…”

Consider that more than 25 million jobs were lost in just two months in the last round of shutdowns. The economy contracted by 31.4 percent in the second quarter, creating depression-like conditions in a concise window of time. The unemployment rate went from the lowest in 50 years at 3.5 percent, to the highest since the 1930s at 14.7 percent in April.

Thankfully, the economy rebounded by a record 33.1 percent in the third quarter, and the unemployment rate is back down to 6.9 percent, but for how long?

One saving grace for the American people could be the vaccines currently in development. President Donald Trump announced Operation Warp Speed in May to mass-produce millions of doses of vaccines in advance — not knowing if the candidate regimens would even be effective.

That is the critical turn we are all waiting for. On Nov. 13, President Trump outlined his plan to deliver the vaccine now, after it was announced Pfizer had developed a vaccine that was 90 percent effective.

Trump stated, “In July, my administration reached an agreement with Pfizer to provide $1.95 billion to support the mass manufacturing and distribution of 100 million doses, with the option to purchase a total of 600 million doses shortly thereafter.  Our investment will make it possible for the vaccine to be provided by Pfizer free of charge… We will work to secure an emergency use authorization, which should be coming down extremely soon.  And my administration will then coordinate the distribution of the vaccine, and it will be approved, I think — again, it will be approved very, very quickly, we hope.”

The hurdles include the normal process for getting drugs approved, Trump noted, stating, “The average development timeline for the vaccine, including clinical tests and manufacturing, can take 8 to 12 years.  Through Operation Warp Speed, we’re doing it in less than one year.  If you had a different administration with different people, what we’ve done would have taken, in my opinion, three, four, five years, and it would have been in the FDA forever.”

In the meantime, New York Gov. Cuomo threw cold water on the idea of administering the vaccine in New York, stating on Nov. 9, “We can’t let this vaccination plan go forward the way that Trump and his administration is designing it.”

Later, Cuomo seemed more concerned about who would get credit for approving the vaccine in remarks on Nov. 17, accusing President Trump of rushing the process, stating, “nobody is going to trust him saying it’s a safe vaccine. But you’re going to see this play out, they’ll do what’s called an emergency authorization by the FDA… I think that could happen as soon as January where the FDA, because Trump will push them, will say we authorized the drug for emergency use. You could see it starting in January before Biden gets into office, and that’s why I’m pushing so hard to make sure that we have a process in place to check what the FDA says before people start getting the vaccine in New York.”

So, watch for the pivot to occur. On November 20, Pfizer ready will file the first emergency use authorization for its vaccine.

Would Biden really rescind the vaccine’s emergency use once distribution has begun or cast doubt on the vaccine’s efficacy, creating public fear and destroying his nascent push for unity following the razor-thin election margins? Seems doubtful, but Gov. Cuomo and other Democratic governors seem determined to make the restrictions on the American people last as long as possible. And if Biden wins, we’ll find out soon enough if that means the whole country, too.