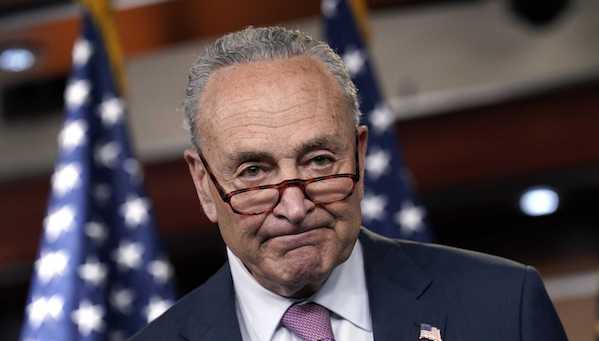 Buoyed by Sen. Joe Manchin and Kyrsten Sinema’s decisions to support their profligate spending bill, Democratic leaders are ecstatic about the so-called “Inflation Reduction Act” making its way to the U.S. House later this week.
dd

Even the CBO explained the bill would do nothing for inflation. It’s a progressive wish list before the Democrats lose power this fall. So its most ardent supporters, especially in insular academia, instead praise the bill as the “biggest piece of climate legislation” in history.

Yet, despite all its negatives, H.R. 5376 likely will be forgotten, just like the “biggest piece” of gun-control legislation in decades signed into law about a month ago.

Despite that ballyhooed bill, gun violence still occurs. Imagine that.

What President Biden doesn’t want to admit is that the Income Reduction Act includes tax increases during a recession, big government overreach with 87,000 new IRS agents, and Green energy fantasies for the radical left’s agenda. https://t.co/wNa38ohYIZ

Nearly a fortnight ago, the University of Pennsylvania’s Wharton School debunked Sen. Chuck Schumer’s lies by explaining that 5376 will increase inflation in the near term and then expressed “low confidence that the legislation will have any impact on inflation.”

NBC News ran a piece from Duke University economics Prof. Wilbur John Coleman, who coherently explained that it will “make inflation worse by raising the cost of producing goods and services and lowering their overall supply,” then added, “one part of the act that might help reduce inflation is ironically the one part that most Democrats don’t want in there: encouraging fossil fuel production.”

The CBO, University of Pennsylvania, and Duke University are not usually friends of the GOP.

The ivory tower radicals ignore this and now rant that if we don’t get on board with their climate alarmism, America will lose “all credibility and negotiating power in international arenas.”

Do these international arenas include places like China, where coal-fired power plants and blast furnaces are built faster than we construct Walmarts? And how does this bill address emission rates in emerging nations across Africa, South Asia, and South America? This legislation doubtlessly fails to satisfy those discussing climate change in apocalyptic terms.

Despite the left’s lies, the United States has long been a strong leader in environmental responsibility. Our CO2 emissions have consistently declined for two decades.

Aside from the tyrannical thought of 87,000 new IRS agents, I believe the “historic” bill will be forgotten by the time voters head to the polls in 90 days since the country has more urgent concerns.

Like the gun-control bill, last week’s efforts won’t have some phantasmagorical reversal of natural weather patterns. Outside of a couple hot weeks in the northeast, most of America has enjoyed pleasant, normal temperatures this summer without significant heat waves.

The insane effort to “address climate change” will thus be forgotten. And for the sane among us who do believe climate change is vastly overhyped or not a priority, we move on to immediate life-and-death matters.

Ultimately we are regularly reminded we must “do something” about issues that mainly concern media types and our elites. There has been much legislative activity this spring and summer on Capitol Hill. Has that assuaged Rep. Alexandria Ocasio-Cortez’s temper tantrums? No, and it never will.

cA.J. Kaufman is a columnist for Alpha News and here at The Lid