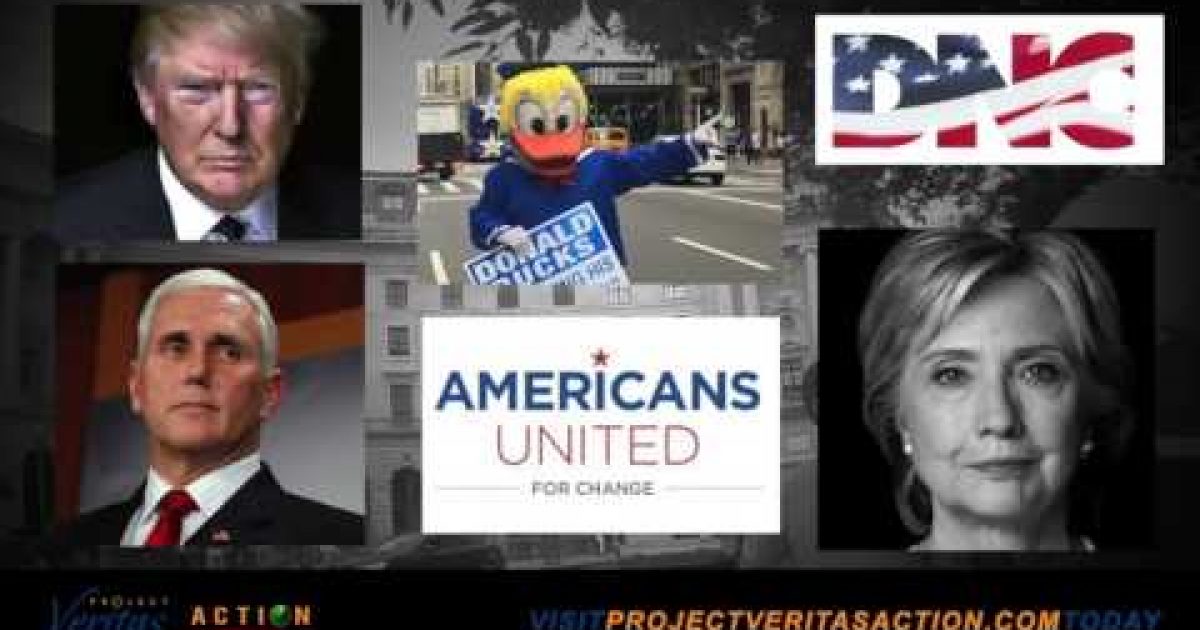 Groucho: I’m alright, how are you? I say, here is a little peninsula, and here is a viaduct leading over to the mainland.

Chico: Alright, why a duck?

Groucho: (pause) I’m not playing “Ask Me Another,” I say that’s a viaduct.

Groucho: Well, I don’t know why a no chicken; I’m a stranger here myself. All I know is that it’s a viaduct. You try to cross over there a chicken and you’ll find out why a duck.

The answer to Chico’s question is, “because Hillary Clinton wants one.” Specifically she wanted Donald Duck.

Project Veritas Action has released the third video explaining the way fraudulent way the Clinton campaign operates. The latest undercover investigation dives further into the back room dealings of Democratic politics exposing that the Hillary Clinton’s campaign and the DNC were illegally coordinating efforts with the super PAC, Americans United for Change.

It is made clear that high-level DNC operative Creamer realized that this direct coordination between Democracy Partners and the campaign would be damning when he said: “Don’t repeat that to anybody.”

It was earlier this year when people wearing Donald Duck costumes started showing up at Donald Trump events all over the country. Brad Woodhouse is the president of Americans United for Change (AUFC) and he worked with Robert Creamer, Scott Foval, and DNC Rapid Response Coordinator Aaron Black to launch their “Donald Ducks” campaign.

(…) “Let me tell you something. I think she [Hillary Clinton] has the right instinct on this. This thing is resonating, but that story is not exactly what you want to hear about how presidential decision-making happened,” said Woodhouse.

However, the originator of the Donald Ducks scheme was supposed to remain secret

Robert Creamer goes on to add, “I was actually on a plane to go to London last week — Christina Reynolds [Deputy Communications Director for Hillary for America] calls saying, ‘I have good news and bad news. The good news is the candidate would like to have a mascot following around the duck — I mean, Trump.’”

Creamer then says, “If the future president wants ducks, we will put ducks on the ground.”

Hillary Clinton and the DNC wanted the Donald Ducks agitators at Trump and Pence campaign events. The direct involvement of the campaign and the Democratic National Committee with Americans United for Change and activists wearing Donald Duck costumes smacks strongly of illegal coordinated campaign expenditures.

Federal campaign law experts have told us “the ducks on the ground are likely public communications for purposes of the law.  It’s political activity opposing Trump, paid for by Americans United for Change funds but controlled by Clinton and her campaign.”

Here’s the bottom line. While many might think the Clinton Campaign was channeling the Marx Brothers (although in this case more “sad” than funny), the illegal coordination between the campaign and the superPAC is just one more indication that Hillary Clinton and the Democratic Party believe that the American voters are just a bunch of “Mickey Mouses.”