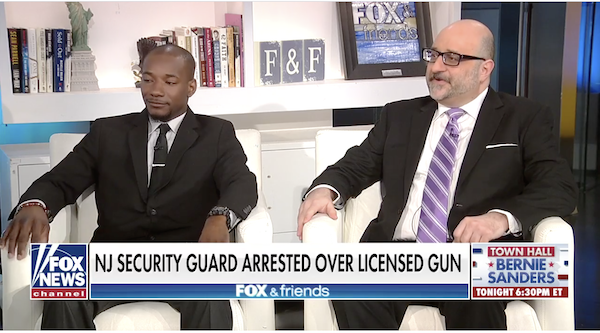 A New Jersey security guard was arrested for carrying a firearm — for which he had a permit — and legal ammunition. Roosevelt Twyne was arrested by Roselle Park Police back in February for illegally carrying a gun and possessing “hollow-point” bullets. Even though he had a legal carry permit and the bullets are publicly listed as legal by the state police.

Twyne, 25, was stopped by Roselle Park Police for having tinted windows in his car. He’s been charged with firearms violations unjustly. The bullets were the same type issued by his employer. “Critical Duty” ammo by Hornady is publicly listed on the New Jersey State Police website as legal in New Jersey because the tips are not “hollow,” but filled.

Since his arrest, Twyne said he has been suspended from his job due to the pending charges and that he has had a difficult time finding work. “It’s a little hard right now trying to find something to keep me on my feet,” he told Fox News.

When he was stopped, Twyne said he informed the officer “that I have my firearm as well and I was just going home, a block away from the house.”

“He asked for me to repeat that or do I have anything to prove it? I told him yes, I gave him all my credentials … carry permits, license and again informed him I’m just coming home from work. I live a block away. I’m right there,” he explained.

Twyne said the officer then instructed him to step out of the vehicle, and that he “complied with everything he asked me to do…and just got arrested from there.”

“Honestly, it’s been traumatic and has impacted my life in a way that I’ve never experienced before. It’s hard because now even looking for a part time job or any job, it’s made it so much harder for me. Not only has it tainted my name and reputation, which I have worked hard to attain, not just growing up in Elizabeth, but as a black man trying to make a difference.” Roosevelt Twyne

“He was arrested for the hollow point ammunition, Then they claimed he was transporting his handgun illegally. He had a permit to carry a handgun. The law … makes it clear that it’s illegal to transport unless you are licensed pursuant to chapter 58. And that is precisely what a handgun carry permit is.”

Nappen said the ammunition that led to Twyne’s arrest was the same ammunition issued by his employer. He also pointed to a New Jersey State Police website that says the polymer-tipped Hornady “Critical Duty” ammunition in question is “not considered to be hollow point ammunition” and not illegal to possess in the state—the website goes so far as to specifically name “Critical Duty” as an example of legal ammunition (see above)

“It’s lawful,” Nappen told the Free Beacon. “It’s publicly announced as lawful because it is. It’s not hollow. It’s filled.”

As we have previously reported, New Jersey is hell-on-wheels to legal gun owners and those seeking jobs that require a firearm. There are so many gun laws in the state that even police seem to be confused. The Evan Nappen law firm is the same one that received a win at the New Jersey Supreme Court in the case of Calvin Carlstrom, a US Marine veteran who has been seeking a New Jersey concealed carry permit.

Nappen also stated that the three white officers are the “elephant in the room.” Though they did not make any racist remarks during the arrest, Nappen says it is “dubious.”

“Once they got all of his licenses, he’s a block away from home and everything is clear now. You arrest him and put these charges on him? I mean, who is this person we’re dealing with now? This isn’t some gang banger that they’ve been trying to get forever and they finally can put something on him because he’s such a danger to the public. This is a good guy. Licensed. He just showed you everything. He’s not a danger to anybody. He’s a good guy on our side. On the side of law and order. Why is he then subjected to the next phase with both the charges that are baseless?” Evan Nappen

Good question, Mr. Nappen. When a New Jersey Security Guard with legal permits and legal ammunition is charged for not having the same…it may be time for some old fashioned lawsuits New Jersey for the wacko enforcement of its gun laws.

The video below is Mr. Twyne’s interview on Fox and Friends: