Analysis: Does Israel Finally Have A New Government Coalition? (Well…Kinda…Maybe)

If The Coalition Holds Together For A Knesset Vote, It Is Doubtful It Will Last Much Longer 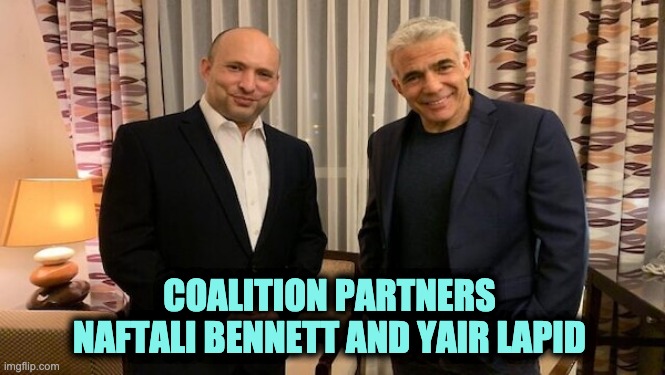 Twenty-five minutes before his mandate to form a new government was to expire and force Israel into its fifth election in a bit more than two years, a new coalition was formed. Yesh Atid leader Yair Lapid called President Rivlin (who was at a soccer game)  and informed him that he had managed to form a government. Lapid and Naftali Bennett, the head of the Yamina party, were together during the call, and Rivlin took the call from the locker room of the soccer stadium.

“Mr. President, I call you to say that I was able to form a government with factions. There is a future, right, blue and white, RAAM, new hope, Meretz and the Labor Party,” Lapid said, adding: “Everyone signed and informed me that they had succeeded. I can form a government. “Lapid then handed the phone to Bennett, who also spoke with the president.

Israelis do not vote directly for a Prime Minister, nor do they vote for a representative—remember, it’s a tiny country. Actually, there were direct elections for the Prime Minister in the 1980s, but that was changed back to the original system when direct voting didn’t produce a more stable government.

There has never been an Israeli election where one party gained a majority of the 120 seats in the Knesset. Every election has produced a coalition government.

If the new coalition is confirmed by the new Israeli Knesset when it meets (sometime before June 14), it will be comprised of eight parties with a total of 61 seats in the Knesset. The eight parties included in the coalition are Blue and White, Labor, Meretz, New Hope, Ra’am, Yamina, Yesh Atid, Yisrael Beiteinu. Ra’am has the historic possibility of being the first Arab party to ever be a part of an Israeli government. Arabs have almost always had seats in the Knesset.

The new government will be the first in a dozen years that won’t include Binyamin Netanyahu as its leader and Prime Minister, include an Arab party for the first time ever, has no real dominant party, and will the broadest coalition in Israeli history. But the operative word is “if” Everything I just mentioned is a reason why the government coalition may not hold together until the Knesset votes to approve it—or why it may not last long if installed.

Before we get to that, understand that a coalition is more than a few parties getting together over a beer and deciding to work together.  A coalition agreement outlines who the ministers will be and for how long, and if there is a rotation of ministries who gets what and in which order. A coalition agreement will also outline the important legislation to be passed. Any coalition negotiation is arduous. The final details of this agreement have not as of yet been negotiated.

Note: I have asked to be given the ice cream or Oreo cookie ministry portfolios, but since I don’t live in Israel and those portfolios do not exist, my request was ignored.

Because the coalition has a razor-thin 61 seats, it would take only one Knesset member in one of the coalition parties to disagree with the final deal, vote not to approve the government, and toss the new government out the window. There are already cracks beginning to show.

Recognizing the coalition’s fragility, the Knesset ministers (MK) of the parties involved want a Knesset vote ASAP. They understand that all Netanyahu’s Likud Party has to do is pick off one of the 61 MKs to destroy the coalition. The Knesset speaker Yariv Levin comes from Likud and wants to delay a vote on the coalition as long as possible per Israeli law, wanting to give Bibi the time to pick off one MK if possible.

On Thursday, the 61 MKs due to make up the new coalition submitted a formal request to the Secretary of the Knesset to begin the process of replacing Levin. However, Nir Orbach of Yamina announced he did not support the request to remove Levin, that his signature was added without his knowledge, and asked that it be withdrawn—that leaves them one short of the votes needed to toss the speaker. So Lapid vetoed the movement to keep the coalition together.

Note: although I researched it, I couldn’t discover if Orbach is related to my favorite character from Law and Order, Lenny Brisco, who was played by the late great Jerry Orbach.

Israeli law requires a new election at least every four years. Per the public part of the coalition agreement, which is not fully known or worked out, Bennett will be the Premier for the first two years and Lapid for the next two.

That in itself is strange. Naftali Bennett’s Yamina party (6 seats) conservative in nature, even more to the right than Likud.  Bennett will be the most religiously observant PM in Israel’s history. He wears a yarmulke all the time and believes that Judea and Samaria should be annexed by Israel. Lapid’s party (17 seats), on the other hand, Yesh Atid is liberal, supports a two-state solution, and is secular in nature, including the demand of ending military draft exemptions for the ultra-Orthodox.

The eight parties in the coalition are all over the place politically.

Notice Yesh Atid, the largest party, has only 17 seats and Yamina only six. Before that, the smallest party to lead a coalition was Labor in 1999, with 26 seats.  This particular coalition doesn’t include a dominant party, making the government more prone to splits, thus, less stable. The party receiving the most seats this past election isn’t in the coalition. It was Likud with 30 seats. But Netanyahu couldn’t attract 31 more seats to join his coalition when given the opportunity.

If the parties are all over the place ideologically, how were they able to coalesce? The primary objective of each of the parties in the coalition was to make sure that Binyamin Netanyahu was no longer part of the ruling government.  If the coalition receives Knesset approval, they achieved their goal.

But then they have to rule. Can a coalition so ideologically diverse stay together after it achieves its goal of removing Netanyahu?  Doubtful. As I have said many times before, as fractured as American politics are, our Democratic Vs. GOP battles are kid’s play compared to Israeli politics.  A few of the parties in the coalition broke off from Likud. Others are combinations of other parties. If the new government gets seated, meaning it reached its primary goal of ousting Bibi, the glue uniting the parties will no longer work. The coalition is guaranteed to be fractured and fall apart.  My prediction is six months at the most.

Again the important word is if. Those who do not believe the coalition can fall apart before the Knesset vote, allow me to point you to  1990, or what Shimon Peres called “the dirty trick.”

The existing coalition at the time was led by Likud and Yitzhak Shamir. It was voted down by a no-confidence vote after the Labor Party’s Peres pulled his and other leftist parties out of the government because Shamir did not accept a plan by Bush #41’s anti-Israel secretary of state James “F**k the Jews” Baker. It was the only time in Israeli history that a government was dissolved by a motion of no confidence.

After being given the mandate to form a new government, Peres announced he could form a new government made up of left-wing and ultra-orthodox parties.  The new government was to be approved on April, 11,1990.  However, on that morning of the vote, two MKs from the ultra-orthodox party Agudat Yisrael didn’t show up. Apparently, the Lubavitcher Rebbe ruled they could not support any concession of Israeli territory (one of Peres’ objectives). With their absence, Peres didn’t have enough votes for Knesset approval. Eventually, the mandate to form a government was passed to Shamir, who managed to form a right-wing coalition. Proving that old saying once again, “the opera ain’t over until the zaftig lady sings.”

This will be a fast-changing story. A coalition has been agreed to, but not every detail has been worked out. Before it reaches the Knesset for a vote, Netanyahu will be working hard to pick off the one MK needed to squash the new coalition and force another election. And even if the new ideologically fractured coalition gets the requisite 61 votes in the Knesset, it is not likely to last long. Keep checking back here at The Lid to stay on top of the news.