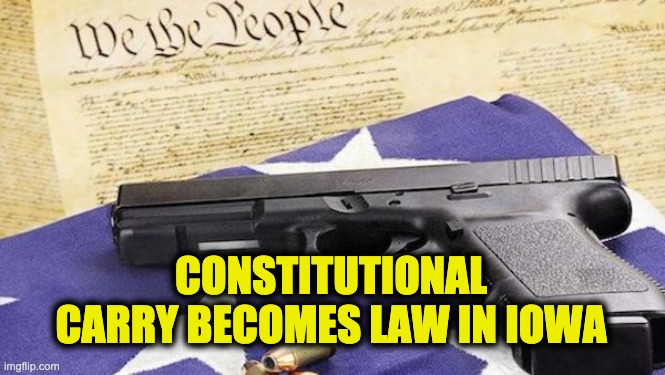 Iowa has joined the ranks of constitutional carry states, Carrying a firearm will no longer require a permit in Iowa as of July 1, 2021. They still have to undergo Federal background checks from licensed gun dealers to acquire a firearm but are not prohibited from purchasing a gun from a private person. The bill, House File 756, also has portions that deal with mentally ill persons. House File 621 was also signed into law, which prohibits frivolous 3rd party lawsuits intended to bankrupt gun distributors and manufacturers.

Constitutional carry (permit-less carry) has been a trend lately since the Biden administration made it clear that they were coming after law-abiding gun owners. His statements about pulling protections from gun manufacturers are also in the fight for the 2nd amendment.

House File 621: A bill for an act establishing which actions may be brought against a firearm, firearm accessory, and ammunition manufacturers, distributors, importers, trade associations, sellers, or dealers.

ordinance, motion, resolution, policy, or amendment regulating the ownership, possession, carrying, legal transfer, lawful
transportation, modification, registration, or licensing of firearms, firearms attachments, or other weapons when the ownership, possession, carrying, transfer, transportation, or modification is otherwise lawful under the laws of this state. An ordinance regulating firearms, firearms attachments, or other weapons in violation of this section existing on or after April 5, 1990, is void.

House File 756 was backed by the NRA, and Governor Kim Reynolds signed it into law on Friday.

Individuals will still have to follow federal law and go through an instant background check to buy from licensed sellers each time they purchase a gun.

People who fail to commit to the new law will be charged with a Class D felony, which is punishable by up to five years in prison. It will become a felony if a person sells, rents, or loans a firearm to someone the seller “knows or reasonably should know” isn’t legally allowed to get a gun or is intoxicated.

“Today I signed legislation that protects the 2nd Amendment rights of Iowa’s law-abiding citizens while still preventing the sale of firearms to criminals and other dangerous individuals,” Reynolds said in a statement after signing the bill.

“This law also takes greater steps to inform law enforcement about an individual’s mental illness helping ensure firearms don’t end up in the wrong hands,” she added. “We will never be able to outlaw or prevent every single bad actor from getting a gun, but what we can do is ensure law-abiding citizens have full access to their constitutional rights while keeping Iowans safe.”

Iowa is the 16th US state to allow concealed carry of handguns without a permit. Tennessee will probably be number 17. The legislature passed a permitless carry bill that the Governor is expected to sign.

President Biden has promised to repeal the Federal protection of firearms manufacturers (the PLCAA). House file 621 puts an extra layer of protection over firearms businesses, according to the NRA:

In addition, HF 621 also sends a strong message. President Biden has promised to repeal the federal law protecting the firearms industry from frivolous lawsuits as a main part of his assault on the Second Amendment. With her signature on this bill, Gov. Reynolds ensures that Iowa has an additional layer of protection to prevent anti-gun extremists from attempting to bankrupt law-abiding businesses by suing them for the third party, criminal misuse of their legal products.

The states we’ve seen moving toward more 2nd amendment rights instead of less are virtually all Republican. There is a divide in America that grows ever wider both over voting and over the 2nd amendment as liberals want to water down “one man one vote,” and attack Americans’ other rights “endowed by their creator.”