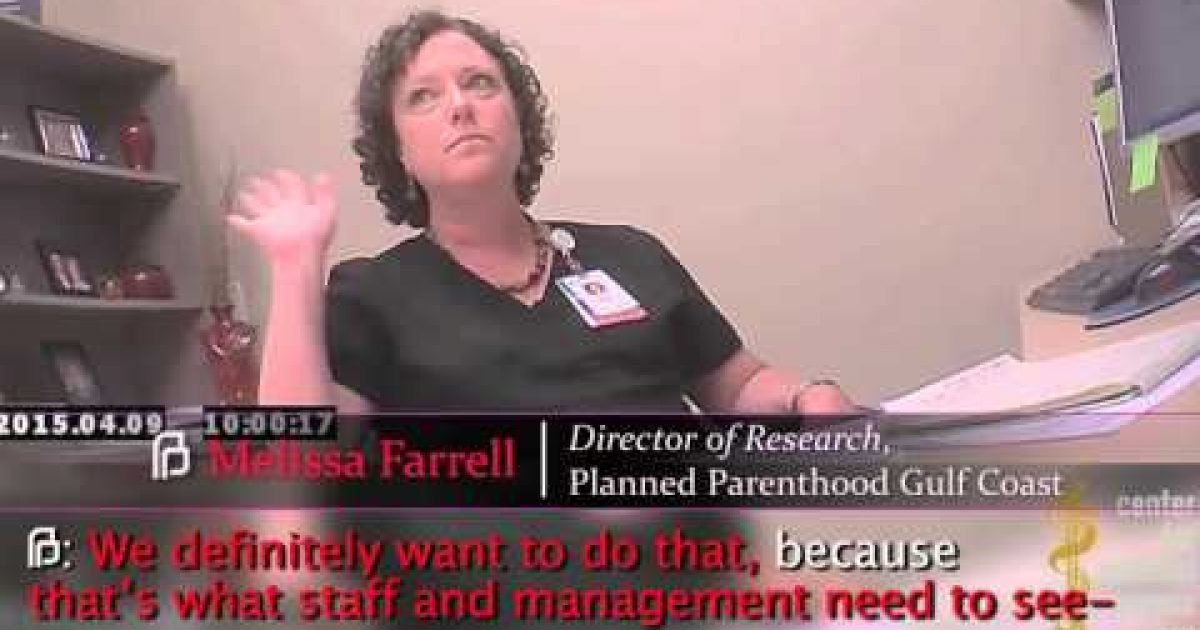 Despite the fact that a Texas prosecutor is trying to shut them down, the Center For Medical Progress is still at work trying to expose Planned Parenthood.  This new video taken at Planned Parenthood Gulf Coast (embedded at the bottom of this post) along with some newly-released documents from a Texas Public Information Act request  (the state equivalent of a FIOA request ) demonstrates that  Planned Parenthood is using accounting gimmicks to hide its illegal sale of aborted baby parts.

The video is from April 9, 2015 when David Daleiden and Sandra Merritt from The Center for Medical Progress made an undercover visit to Planned Parenthood Gulf Coast’s (PPGC)  abortion center in Houston. The CMP personnel met with  PPGC Director of Research Melissa Farrell, who has overseen the organization’s fetal tissue supply program since 2006.

“We had two levels of invoicing for them. We had it worded as ‘per consent,’” explains Farrell as she describes a previous fetal tissue deal that took place at PPGC. Farrell indicates that “per consent” is the phrase used in PPGC budgeting in place of “per specimen” for fetal tissue.

Farrell is aware that while a patient may consent to supply fetal tissue, the specimen itself may not be useable for experimentation: “There’s probably some situations where somebody would consent and then just not, we didn’t get a sample, or she changed her mind, or something happened to the specimen.”

Addressing this dilemma, Daleiden says: “Now obviously, we don’t want to end up paying for material that we can’t use,” and suggests that there be a line item fee of “something else that represents the specimens.” “Obviously,” Farrell agrees, “Yep. Yeah.”

The same video shows PPGC CEO Melaney Linton explaining that Farrell will “work on all of that with you” when it comes to “remuneration” and “compensation” for fetal tissue. And during lunch Farrell told the SMP team her department “contributes so much to the bottom line of our organization here.”

The system of accounting gimmicks and dual invoicing for “consent” payments in place of fetal specimens that Melissa Farrell describes in the video bears a striking resemblance to invoices submitted by Farrell on behalf of PPGC to the University of Texas Medical Branch in 2010 and 2011. In these documents, obtained through a Public Information Act request,  (embedded below) two PPGC invoices for the exact same billing period charge $25 per “Consents obtained,” with a total quantity of 32, and in the same time period charges $150 per “Consent payment” for a smaller quantity of 25. This is consistent with a scheme where Planned Parenthood charged $25 to consent abortion patients to supply fetal tissue, and then charged another $150 for each usable fetal specimen that UTMB could procure.

The total billing from Planned Parenthood for this tissue procurement was over $8,000. The sale, offer to sell, or transfer of human fetal tissue for valuable consideration is a crime under Texas Penal Code 48.02. Planned Parenthood is currently under investigation by the Texas Attorney General’s Office, the Texas Department of Health, and the U.S. Congress for violations relating to its treatment of aborted infants and aborted body parts sales.

This video will make you sick, not like the other graphic videos, but the very concept of funky accounting practices to hide the disgusting practice of selling pieces of freshly killed babies. Think about it for a moment. If a veterinarian killed puppy fetuses, and carefully picked which part of their bodies to crush so she could save the others for scientific research, there would be a progressive demonstration at the National Mall about five minutes after the news was leaked.

But these aren’t puppies, these are human beings. The fact they are trying to hide the practice with accounting tricks demonstrates they know they are doing something illegal. But a progressive district attorney doesn’t care about justice, she brought charges against the whistleblowers, a line of defense to protect the illegal practice of selling parts of babies. Of course they don’t see them as human fetuses they see them as a lump of goo instead of unborn babies.

Below are the documents obtained by CMP via the FOIA request and below that the undercover video: