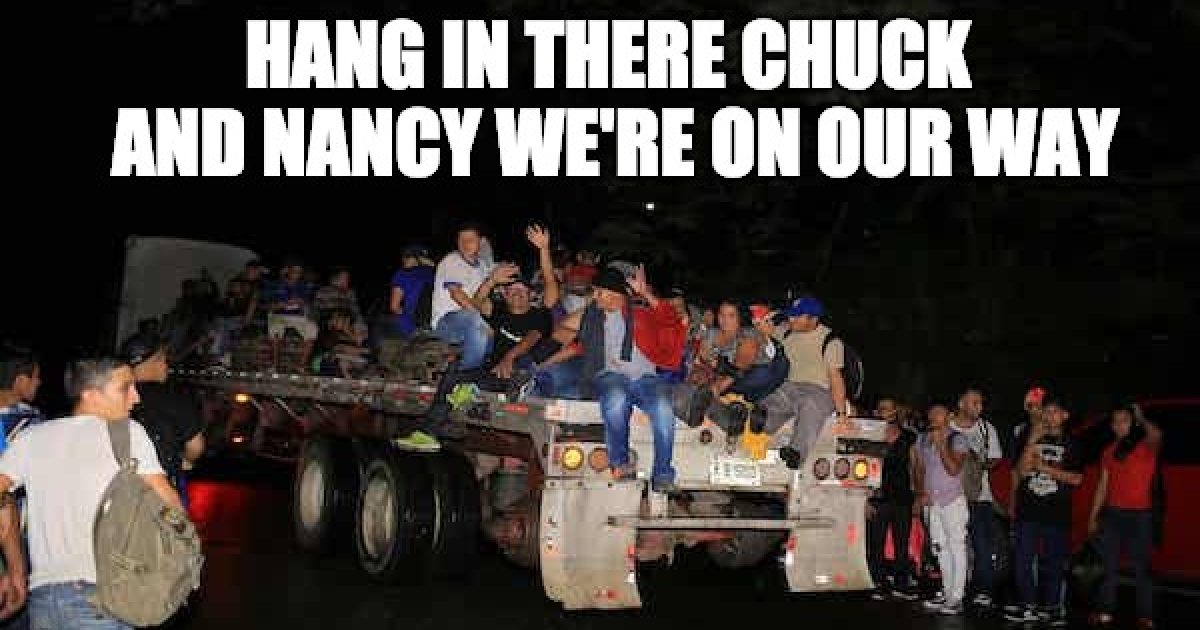 Hundreds of Illegal Immigrant wannabes left the San Pedro. Honduras bus station Monday night and started their trek with the goal to illegally enter the United States. While the initial count is around 600 people, they are expected to pick up hundreds of friends as they moved north. About 300 people climbed aboard buses toward Guatemala, while another 300 began walking.

Honduran media reported that the country’s authorities had reinforced the border with Guatemala to make sure everyone had proper documentation. Children must carry passports and written parental authorization to leave the country, and parents could face up to three years in prison if found to be taking a child without the right documents, Security Minister Julian Pacheco was quoted as saying.

Jenny Arguello, a migrant rights’ activist who was with the caravan, said police patrols were not blocking them but were checking IDs.

This new caravan comes at a time where the U.S. government is shut down because President and the Republicans are pushing border security and the Democrats are trying to ensure that security doesn’t happen.

If the reaction is the same as the previous caravans, the liberals will claim Americans who want to secure the border are overreacting to the coming invasion from the south.

As the shutdown entered day twenty-five, President Trump sent out a tweet that the caravan was coming and urged congressional Democrats to stop “playing political games” and end a partial government shutdown.

A big new Caravan is heading up to our Southern Border from Honduras. Tell Nancy and Chuck that a drone flying around will not stop them. Only a Wall will work. Only a Wall, or Steel Barrier, will keep our Country safe! Stop playing political games and end the Shutdown!

In the last caravan, about 6,000 Central Americans ultimately arrived in the northwestern Mexican city of Tijuana, across from San Diego, an area where there is already extensive border fencing. With U.S. authorities only processing several dozen asylum claims each day, migrants added their names to an already long list and faced months-long wait times.

Tijuana was woefully unprepared to handle the influx and directed them to a sports complex that turned into an unsanitary field of mud during rains. As the city closed down its inadequate shelter, the federal government rented a former outdoor concert venue and more than 3,000 people slept there at its peak. As of Monday, fewer than 700 remained.

Mexican officials say about 1,300 migrants from the previous caravan have returned to Central America, while the rest remain in Mexico or have crossed into the U.S. Mexico has issued about 2,900 humanitarian visas to members of the earlier caravan, though it’s unclear how many are still in the country.

Last Thursday, the chargé d’affaires in the American Embassy, Heide B. Fulton, traveled to the border with Guatemala to tape a plea to migrants. “Don’t let yourself be fooled,” she said. “Don’t invest your time and money in a journey that is destined to fail.”

More than 300,000 Central Americans entered Mexico last year, most of them illegally, and an estimated 80 percent of them were bound for the United States border, Ms. Sánchez Cordero said.

She said migrants in a new caravan who enter the country at official crossing points and register would be granted visas to stay and work in Mexico or permits to travel under the supervision of migration authorities toward the United States border. But those who cross into Mexico illegally, she said, will be deported.

It is unknown the route this caravan will take other than they will do their best to avoid territory claimed by the drug cartels. It will be interesting to see if they aim to end up in Tijuana and join the last caravan waiting for their asylum hearings.

BTW. Fox News reports that ANOTHER new caravan is scheduled to leave next week.