NBC’s New Comedy Called ‘ Beat Up The Billionaire In Vegas’ 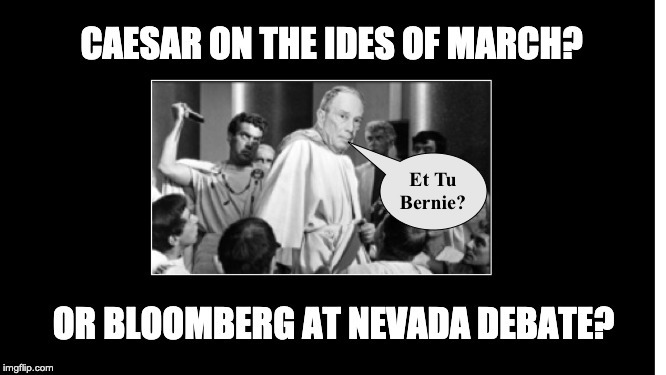 NBC unveiled a new comedy Wednesday night. It was called “Beat Up The Billionaire In Vegas’.” The billionaire’s name is Mike Bloomberg, and at the Nevada debate, he was constantly attacked by all of his opponents. At times Bloomberg seemed like Caesar meeting with the Roman Senate on the ides of March.

In his first debate appearance in the 2020 race, Bloomberg knew that he would be under a furious attack, but he showed a lack of preparation. Much of the time, when attacked, the former NYC Mayor, looked either bored or slightly amused, displaying the arrogance that confirmed the suspicions of many. Watching Bloomberg on the debate stage was like watching a slow-motion train wreck.  And his lack of passion was in stark contrast to his opponents.

Elizabeth Warren started the melee with:

“I’d like to talk about who we’re running against, A billionaire who calls women fat broads and horse-faced lesbians, and no I’m not talking about Donald Trump. I’m talking about Mayor Bloomberg. Democrats are not going to win if we have a nominee who has a history of hiding his tax returns, of harassing women, and of supporting racist policies like red lining and stop and frisk.”

“I actually welcomed Mayor Bloomberg to the stage. I thought that he shouldn’t be hiding behind his TV ads, and so I was all ready for this big day,”

Warren’s next attack Bloomberg on the issue of women in his company who sued and as part of the settlement had to sign nondisclosure agreements. The former Mayor has been hit by claims of sexual harassment and discrimination. Bloomberg’s response to the nondisclosure attack was pathetic.

None of them accuse me of doing anything, other than maybe they didn’t like a joke I told.

Bloomberg is wishing he was Hunter’s father about now

Bloomberg’s one attempt at humor was met with groans.  When confronted with the fact he hasn’t released his tax returns, the billionaire said:

Fortunately, I make a lot of money, and we do business all around the world. And we are preparing it. The number of pages will probably be in the thousands of pages. I can’t go to TurboTax. But I put out my tax return every year for 12 years in City Hall. We will put out this one. It tells everybody everything they need to know about every investment that I make and where the money goes.

Mayor Pete found a way to slam Bloomberg and Bernie at the same time:

Yes, we’ve got to wake up as a party. We could wake up two weeks from today, the day after Super Tuesday, and the only candidates left standing will be Bernie Sanders and Mike Bloomberg, the two most polarizing figures on this stage. And most Americans don’t see where they fit if they’ve got to choose between a socialist who thinks that capitalism is the root of all evil and a billionaire who thinks that money ought to be the root of all power.

Let’s put forward somebody who actually lives and works in a middle-class neighborhood, in an industrial Midwestern city. Let’s put forward somebody who’s actually a Democrat. Look…We shouldn’t have to choose between one candidate who wants to burn this party down and another candidate who wants to buy this party out. We can do better.

Bloomberg wasn’t a total failure. He had a great exchange with Bernie about socialism.

As the debate drew to an end, Mike Bloomberg didn’t even seem like he cared.  As each candidate urged viewers to go to their website, the billionaire said, “Well, you can join me at mikebloomberg.com, too, if you want, but I’m not asking for any money.”

At the Nevada debate, former NYC Mayor Michael Bloomberg gave his first impression to much of the country as a candidate for president, it was awful. He seemed like an arrogant rich guy with no personality, who couldn’t defend his own actions.  With all the money the man has spent on TV advertising, one would think he would get a better debate prep team.

Despite the awful debate performance, don’t count Mayor Mike out. So far, he’s spent around $340 million of his own money on the primary campaign, but he is worth over $62 billion. In other words, he could multiply his spending by a factor of ten and still be “filthy rich.”