Net Neutrality Is Dead And That’s GOOD; But Liberals Are FREAKING 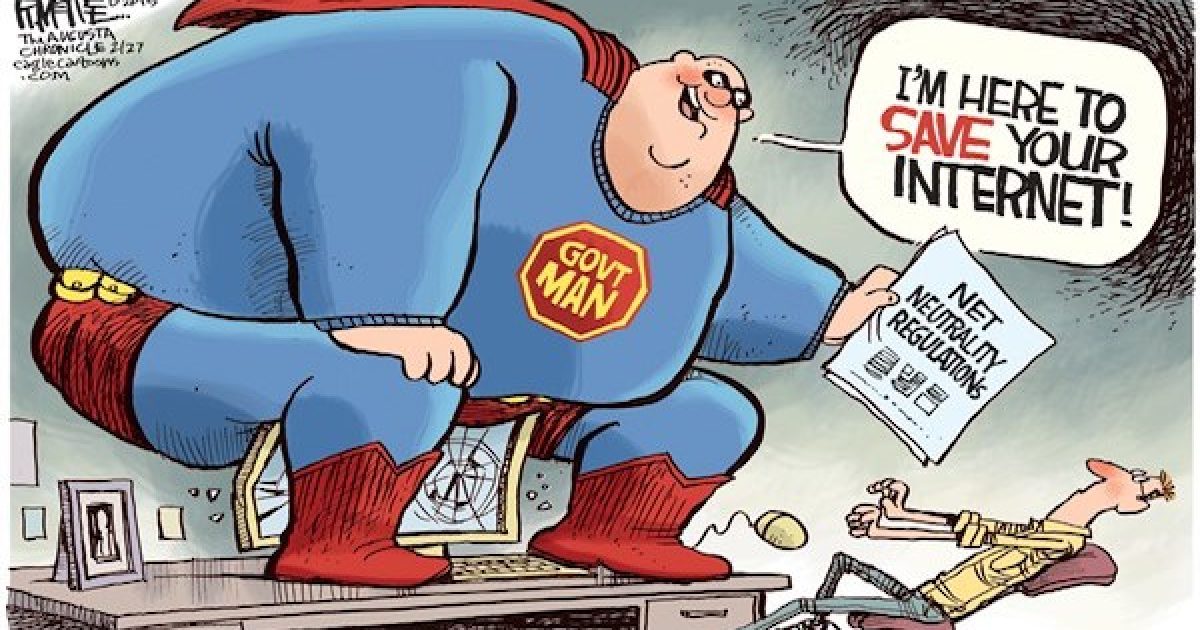 The battle over Net Neutrality may present the clearest example of the difference between liberals and conservatives out there today.

It is the difference between individual liberty and government control of almost every aspect of our lives.

Liberals support the government takeover of the Internet by way of the unaccountable FCC, a group of unelected officials who manage the federal rules related to most broadcasting (radio, TV, internet, etc) issues.

Liberals believe that this government takeover of the Internet is the only way to “keep the internet” fair and free. It’s a load of hogwash, but that’s what they argue.

Here’s the general fear they are pushing on average Americans – if you don’t support Net Neutrality then internet companies, like Comcast or Cox, are going to start charging you outrageously high prices to use specific websites.

Another one, from Senator Chuck Schumer (D-NY), argues that these same internet companies will begin to slow down the internet of people paying lower prices while offering higher speeds to the wealthy.

If #NetNeutrality is eliminated, the Internet may start to resemble a toll road, with the highest bidders cruising along private “fast lanes” while the rest of us inch along a single, traffic-choked public lane.

The Daily Wire’s Ben Shapiro gives a basic explanation of the debate:

The basic debate over net neutrality is actually a reasonable one: is the best way to ensure a better internet for consumers to ban internet service providers (ISPs) from charging certain content providers more for their use of bandwidth than others, or is it to free ISPs to charge what they want, thereby incentivizing ISPs to compete with one another to offer different services at different prices?

On the one hand, there are those who argue that the current ISP oligopoly that exists in many areas of the country must be curbed to prevent monopolistic practices; on the other hand, there are those who argue that regulating ISPs as public utilities prevents new, small ISPs from entering the market, and stops current oligopoly beneficiaries from investing in new technology to forestall such competition.

As Shapiro explains, the basic debate is a reasonable one, but the reaction to the outcome of the debate is not. On Thursday, FCC chairman Ajit Pai killed Net Neutrality, siding with conservatives who believe that government control of the Internet would create more problems than it solves and would hinder a free and fair marketplace of ideas.

However, liberals across the country are responding as if the FCC has personally attacked them and threatened to imprison them in a gulag.

With the loss of the #NetNeutrality  comes the loss of EASY access to the suicide hotline, eating disorder hotline, rape hotline, and self harm services. This absolutely breaks my heart.

We can still fight, and we must keep fighting.

Trump just grabbed your internet by the pussy. Free internet and information has been raped. #TrumpBrokeTheInternet #NetNeutrality

Who will you blame when YouTube costs $30 a month?

Who will you blame when CNN costs $9 a month?

Who will you blame when Netflix costs another $40 a month?

EVERYONE should care about this! It benefits no one unless you’re a faceless, mega corporation. NOBODY is asking for it. https://t.co/d2fBjPe7mX

Kill yourself, @AjitPaiFCC. Before someone trying to run a dungeon on WoW and can’t access their server does it for you. #NetNeutrality

What we have come to know by this move from the FCC is that @AjitPaiFCC is a rogue player. He has acted against the will of a major majority of the American people, left, right and center. He has financial conflicts of interest. He has flouted due process. He’s lost credibility. https://t.co/LgpBLBr9Yy

“The FCC is handing the keys to the internet to a handful of multi-billion corporations.” -Commissioner Clybourn #NetNeutrality #SAVENETNEUTRALITY #TrumpBrokeTheInternet #AjitBrokeTheInternet

These responses are utter insanity. Why? Because today’s FCC decision means that the Internet will continue to operate in the same basic manner it has since the Clinton era. Almost nothing changes. The only thing that is different is that we no longer have the shadow of threat of the government taking over and heavy-handedly micro-managing the way the Internet works.

On Friday, everything will be the same as it was on Wednesday… and yet these liberals respond as if FCC Chairman Ajit Pai just dropped a nuclear bomb on the Internet.

It also ignores the fact that the FCC and the federal government will CONTINUE to regulate the internet, as they have been for the last 30 years.

The FCC will require ISPs to be transparent about their services, meaning that bandwidth throttling or other network management practices, which have sometimes been opaque to consumers, would have to be clearly labeled. The Federal Trade Commission (FTC), meanwhile, would be empowered to regulate anti-competitive or anti-consumer behavior, stepping in when internet companies make promises to provide a service that they do not keep.

Pai has framed the move as a return to the sort of “light-touch” regulation that has governed the internet since the Clinton era. “Under my proposal, the federal government will stop micromanaging the Internet,” Pai said in November when details of his plan were released.

In a statement today, FCC Commissioner Brendan Carr, a Trump appointee who voted in favor of undoing the Obama era rules, noted that the internet would still be subject to federal oversight, noting that prior to the Title II reclassification, the FTC brought numerous privacy actions against ISPs and that federal antitrust law would still apply to internet service. “We are not giving ISPs free reign to dictate your online experience,” he said. “Our decision today includes powerful legal checks.”

For his efforts at defending our freedom and ensuring that the Internet remains free for all to use, Pai has been under almost constant threat. In fact, on Thursday he was giving a speech that was interrupted when the venue had to be cleared because of a credible bomb threat made against the gathering.

Senator Ted Cruz (R-TX) took to his Facebook page and added a note of support for Pai and the FCC on Thursday, arguing that the Internet should be allowed to exist with as little government control as possible.

Since its inception, the internet has been an oasis of freedom. It has not only been a haven for free speech but has served as a great equalizer when it comes to jobs and opportunity by dramatically reducing the barriers of entry for anyone with a new idea and broadband connection. The Obama administration’s so-called net neutrality regulations have threatened the very freedom that has allowed the internet to flourish by placing the internet under 83-year-old public utility regulations that gives sweeping power to unelected bureaucrats who would have the ability to dictate every aspect of the internet. Small businesses in Texas and across the country shouldn’t have to seek ‘Mother May I’ permission from unelected bureaucrats to be able to engage in commerce. It’s un-American and has the power to severely limit the creative destruction that has allowed the internet to flourish.

I commend Chairman Ajit Pai and the FCC for repealing these oppressive Obama-era regulations and restoring freedom to the internet. I would also like to thank the Commission for responding to a request from Commissioner Michael O’Rielly and me to include a provision in the order that will prevent the Obama administration’s dangerous policy to infest the internet through state and local government mandates that serve no purpose other than to stifle America’s entrepreneurial spirit, frustrate innovation, and block economic opportunity. Moving forward, the message for government regulators and Congress should be simple- the internet should be free of taxation, censorship and regulation. Simply put — leave the internet alone.

I second Senator Cruz’s thoughtful comments on the issue and commend Commissioner Pai for standing up for what is right even in the face of such ugly and demented opposition.