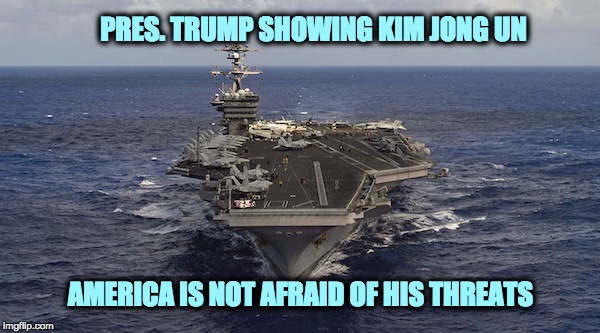 For years, North Korea’s despotic and reckless leader Kim Jong Un has gone unchecked by western powers, save for the ever-present sanctions against the hermit kingdom.

Reclusive at best, totalitarian at worse, Kim Jong Un is seen as a sort of God-Emperor by his people; an image that has been force-fed to them from birth by use of a total media blackout in the country.  This has led to an absurd reality for North Korea, in which famine and unsatisfactory medical care have left thousands, if not millions of North Koreans on the verge of death at all times.  Couple this with defectors’ reports of Holocaust-style concentration camps, with even more horrific and barbaric practices in place, and one can easily understand why Kim Jong Un would be an international target for regime change.

The harder question to ask, “why hasn’t anyone toppled him?”, can be answered with one simple word:  China.

The world’s most populous nation has long backed the communist government of North Korea, with implied, but not met, standards of international decency.  Now, as Kim Jong Un continues to berate, threaten, and destabilize the entire region, the United States has had enough.

“A U.S. Navy strike group will be moving toward the western Pacific Ocean near the Korean peninsula as a show of force, a U.S. official told Reuters on Saturday, as concerns grow about North Korea’s advancing weapons program.

“Earlier this month North Korea tested a liquid-fueled Scud missile which only traveled a fraction of its range.

“The strike group, called Carl Vinson, includes an aircraft carrier and will make its way from Singapore toward the Korean peninsula, according to the official, who was not authorized to speak to the media and requested anonymity.

“The news was first reported by Reuters.

“In a statement late Saturday, the U.S. Navy’s Third Fleet said the strike group had been directed to sail north, but it did not specify the destination. The military vessels will operate in the Western Pacific rather than making previously planned port visits to Australia, it added.”

North Korea’s increasingly hostile behavior included a ridiculous threat to launch a nuclear weapon on the day of Donald Trump’s inauguration, in an effort to send a message of disapproval to the United States.  Thankfully, the launch never occurred, either by choice, or more likely, Kim Jong Un was bluffing in regards to the potential of Pyongyang’s nuclear program.

Whatever the reason for the failed threat, North Korea has been committing atrocious human rights violations for decades, and Donald Trump may just be the President with the stones to do something about it.