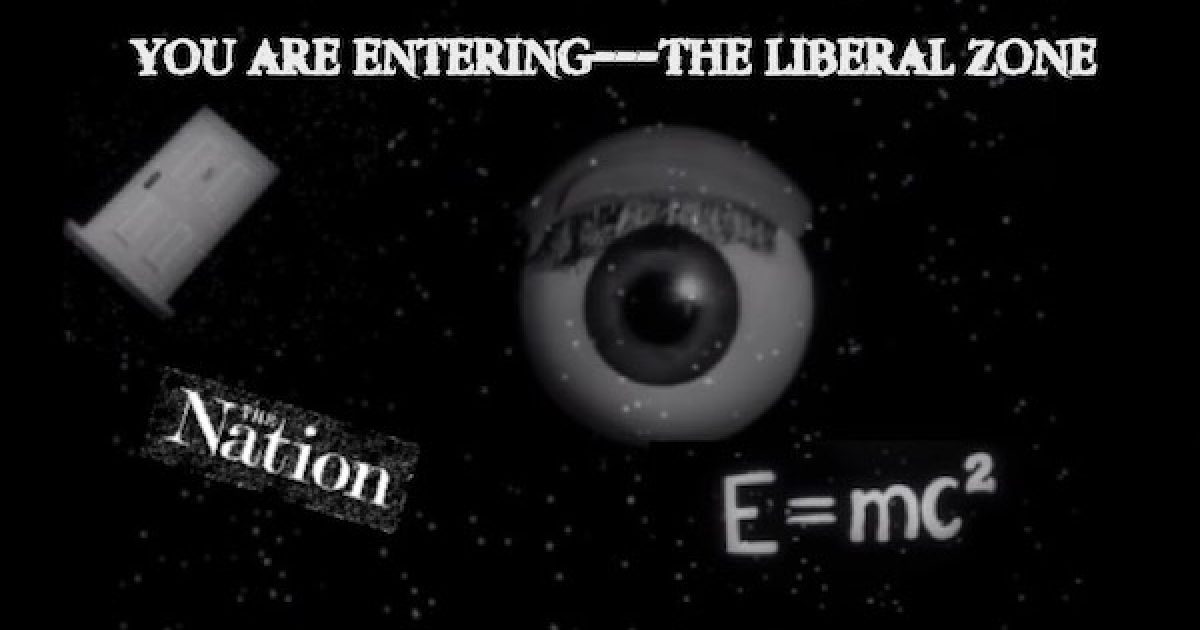 “There is a fifth dimension beyond that which is known to rational man. It is a dimension as vast as the empty space between its writer’s ears space timeless as the idiot who cannot read his watch. It is the middle ground between imbecilic and idiot, between science and liberal thought and it, lies between the pit of man’s fears and stops just before the edge of rational through. This is the dimension of The Nation Magazine. It is an area we call the Liberal Zone  .”

Check your calendar folks, it’s not April 1st, This is real! The Nation Magazine is genuinely suggesting that the best way to end capitalism is to eliminate the American family and to take away all children from their parents. Breaking up the family will eliminate civilized society.  Although I could agree to the taking away the kids part if we were talking about every other Saturday night from 8pm-1am. My version is called free babysitting.  As for eliminating capitalism, it’s true that capitalism is the worst economic system ever created, except for all the others. Capitalism is the only economic system where someone who is not well off has the chance to better themselves and their progeny.

This laughable screed was penned by Rosemarie Ho, someone who thinks “feminist theory” is a legitimate discipline. Ho wrote, “Feminist theorist Sophie Lewis’s new book looks at how rethinking pregnancy and the idea of family as forms of labor is central to emancipatory politics,” as the hook for her May 16 article at The Nation.

This is the nonsense that passes for “thought” on our nihilistic college campuses, folks.

Indeed, doing herself no favor with intelligent people everywhere except for crazy liberals, Ho admits at the outset that the idea of destroying the family is a central tenet of communist theory. At least as proposed by Marx and Engels (that’s Karl Marx and Friedrich Engels). If she were intelligent as she believes she is, Ms. Ho would be following the tenets of Groucho Marx and Marty Ingels)  Ms. Ho dug her hole even deeper by also pointing out that abolishing the family is a primary goal of radical homosexual theorists, too.

Karl Marx and Friedrich Engels and radical homosexuals… she cites these as worthy thinkers? A more worthy thinker to follow would be the man who shot an elephant in his pajamas but never found out why the elephant was wearing his pajamas.

Ho makes herself a laughing stock in her very first paragraph. The  Nation fantasist then introduces her subject:

Sophie Lewis, a feminist theorist and geographer, takes up this forgotten struggle in her work. Her new book, Full Surrogacy Now: Feminism Against Family (Verso, 2019) specifically links family abolition to a radical reconceptualization of pregnancy itself. The act of carrying a child to term, she insists, is work — labor that has long been exploited and overlooked by the academy — and so is mothering.

Well, yes, they are work and joy! Ho goes on to prove that she has inculcated well the idiotic vernacular of academia by using such meaningless terms as “ideological constructs,” hate for “binary-genders,” laments about “symbiogenesis,” and “the patriarchy,” along with desires for ending the “proletarian, biogenetic, nuclear private household.”

All of this is pseudo-intellectual gobbledegook that actually reveals a hatred of traditional male-female relationships, motherhood, and child dependency on a family.

That’s something I want to challenge, the idea that babies belong to anyone—the idea that the product of gestational labor gets transferred as property to a set of people. That is actually one of the revolutionary horizons that the Sisterhood of Black Single Mothers advocated for: how children should belong to no one but themselves.

Hey! When I am eating in a restaurant, and the woman in the booth behind me is tending to a screaming baby with a giant pungent turd in its diaper…that child belongs to that mother. As sure as all heck that baby does not belong to me. And when my son’s grades earned him a spot on the “President’s List” the last semester, that kid belongs to me. Sorry, but if I had to change his diaper in the middle of the night, comfort him when he was ill, and help him with his homework, I get to claim ownership when he gets honored.

This thing is, children are not autonomous adults for a reason. Their brains are not formed enough to fully understand the consequences of the decisions they need to make to be responsible not just for themselves, but for their role in society.

For example, would a child eat right if he “belonged to no one but himself”? Or would he eat nothing but ice cream, candy, and cake? I think we know the answer to that [is that really bad?]. Therefore, if there were no such thing as a parent, the government would have to step in and force that child to eat a healthy diet. Kind off like Michelle Obama did with that school lunch fiasco. Remember what happened with that?  Kids preferred to throw out their food. And guess what you just did by doing that? Yes, you’ve now made the child a vassal of the state, meaning he is still not a being who belongs only to himself, he or she belongs to the country. And holiday meals will really suck.

So, what the Nation in the Liberal zone is are pushing is a chimera, fantasy, a false state of being.

Part of this post was first seen at Godfather Politics