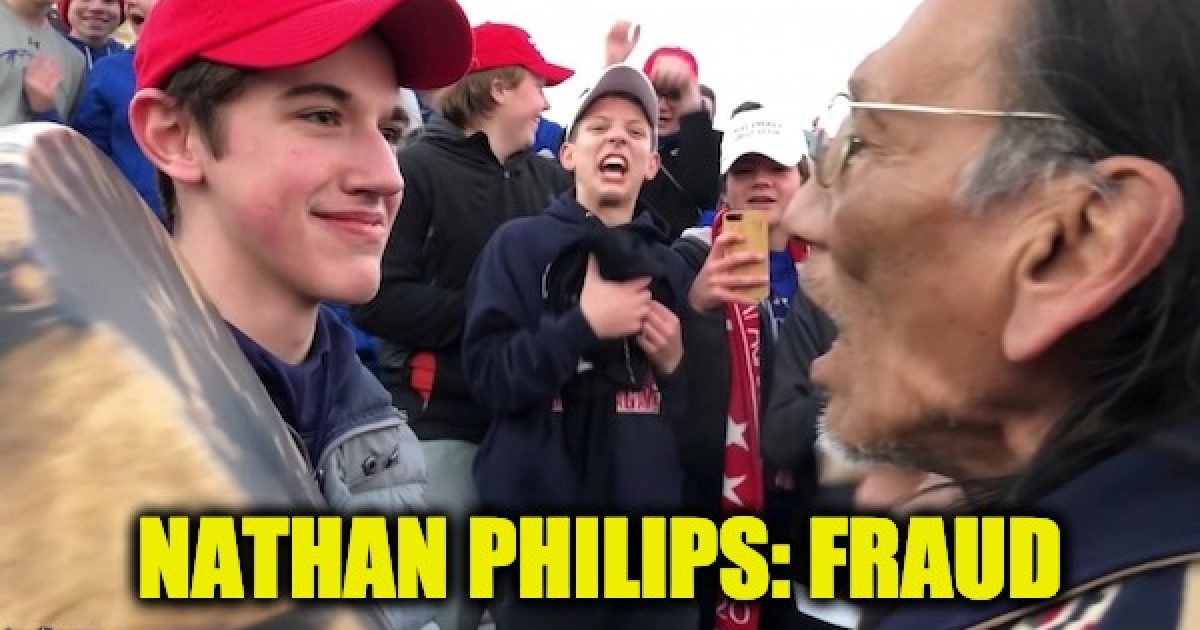 Nathan Philips the Native American Tribal Elder involved in the Covington Catholic High School incident this weekend has a track record of dishonesty and crime. The most recent and most visible lie was that Philips’ initial story of his supposed confrontation with the High School kids. That story was thoroughly discredited once a more extended version of the incident video was found and released.

In fact, the extended video shows the kids from Covington school students were moving in on, and taunting Philps, but Philips was moving in on the Students who themselves being taunted with racist and homophobic slurs by a different group at the Lincoln Memorial that day, a group of Black Hebrew Israelites.

Then there’s the question to whether or not he claims to be a Vietnam War. Some of the initial media reports said he served in the Vietnam war. Some of those claims were walked back with the additional claim that Philips never said he was a Vietnam Vet, instead, he used the term “Vietnam era Vet.” Below is part of a video he made for the  Native Youth Alliance, He definitely says he was a Vietnam Vet and that he was “in the theater.”  If he served in Vietnam it had to be with fellow Vietnam combat fraud Connecticut Senator Blumenthal, and the only “theater” Mr. Philips was in during his Marine years had sticky floors, sold popcorn and Raisinets, and showed a movie.

The video is part of a much longer video which is embedded at bottom of the post. The relevant part starts at the 9:40 mark.

Military Times received a statement from the Marine Corps explaining that Philips did not serve in Vietnam. Per the USMC he spent four years in the Marine Corps Reserve and left in 1976 with the rank of private, or E-1, and never left stateside.

his duty status says “discharged,” not “honorably discharged ”Jennifer Van Laar explains it probably has to do with his multiple stints in confinement after being AWOL.

When he wasn’t absent without leave he served as refrigerator mechanic or ReferMech.

According to the Washington Examiner, Nathan Philips was no angel outside the USMC. He has a violent criminal record and escaped from jail as a 19-year old and was also charged with alcohol-related crimes

Phillips, who was 19 at the time, was “charged with escaping from the Nebraska Penal Complex where he was confined May 3,” according to a May 9, 1974, article in the Lincoln Star. The court approved a bond of $500 and set a preliminary hearing for May 14.

He pleaded guilty to assault on June 19, 1974, and was fined $200. In addition, he was charged with underage possession of alcohol in 1972, 1973, and 1975, as well as negligent driving. A destruction of property charge against him was dropped in August 1973, but Phillips was sentenced to one-year probation for a related charge of alcohol possession by a minor. In December 1978, he was charged with driving without a license.

The entire episode with the Boys from Covington Catholic High School turned out to be a Nathan Philips lie.  And when one looks at much of the rest of Mr. Philips life, it’s a wonder that there are still people who believe his account of the incident at the Lincoln Memorial this past weekend. One day when he leaves this earth and meets his maker, it’s hard to believe he will get an honorable discharge there either.

philips from Jeff Dunetz on Vimeo.