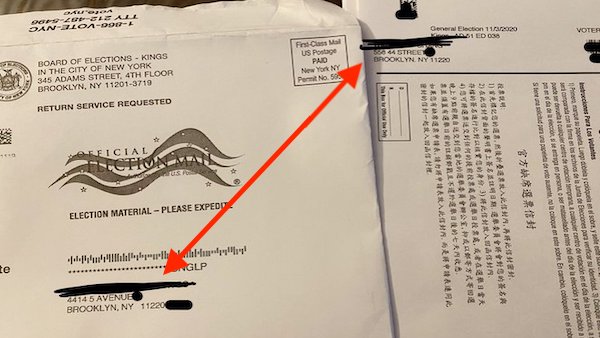 Ironically, a reporter for the leftist news network known as CNN got a mail-in ballot, except that said ballot’s return envelope had someone else’s address on it.  Note the picture above displays a different example; it is not the address of Nathan McDermott.

I just got my New York mail-in ballot today and the security envelope I’m supposed to put it in and sign has some other guy’s name and address on it.

Gothamist is already reporting other cases, so this is looking to be a widespread problem.https://t.co/lSF3abIXTB pic.twitter.com/4uWmNOwwRW

So this is a problem?  Seriously???  Correct me if I’m wrong, but Trump said mail-in balloting was a problem a long time ago.  But if Trump says it – it’s automatically disregarded.

Signing and returning this ballot could mean that the vote would be invalidated.
Really?  You don’t say.

Then we have CNN’s crack reporter implying that the average voter is an idiot.

Also, according to Gothamist, signing the envelope with another person’s name/address on it invalidates the ballot, so who knows how many people’s votes could be potentially thrown out. Just saw this update from the BOE, which is nice, but I’m a political journalist, so I pay a bit more attention to this than the average voter needs to, but the wrong address isn’t readily noticeable, so I imagine most voters won’t even register it.

Just saw this update from the BOE, which is nice, but I’m a political journalist, so I pay a bit more attention to this than the average voter needs to, but the wrong address isn’t readily noticeable, so I imagine most voters won’t even register it.https://t.co/rzyoBlRTos

Nathan is a political journalist, so he will notice things, like the wrong address.  The arrogant reporter believes the rest of us are idiots who will just blithely return the ballot without a second glance. Oh, please give me a break. I suppose he is only talking about people who believe the fake news on CNN.

IT BEGINS: Multiple errors reported with NYC's mail-in ballots and the BOE has no clue how to fix the problem https://t.co/wG7eMIajWg

And Yuh-Line Niou, member of the NY State Assembly, tweeted out that despite the fact the return envelope has space for one stamp, it’s not enough.

So FYI to all folks mailing ballots. One forever stamp is not enough! My constituent just went to mail hers and it was over the 1oz weight limit and needed extra postage. Without extra postage, it won’t be delivered.

Primaries were pre-paid; the general is not (thanks @NYGovCuomo for forcing people to pay to exercise a fundamental right). You may need 2 stamps, but envelope makes it seem just 1 is needed. Does anyone know for sure? @BOENYC want to make sure we get the correct info for voters! https://t.co/DFm5eKgueZ pic.twitter.com/WxHlgtCjLm

It’s not voter suppression, it’s Board of Elections’ stupidity.

What do you expect?  Leftists can’t run anything without damaging it, screwing it up, and costing a fortune. That’s why there is concern about mass voting by mail.

If you want evidence of voter fraud, just click on the below:

Most of this post was first seen at True Conservative Pundit