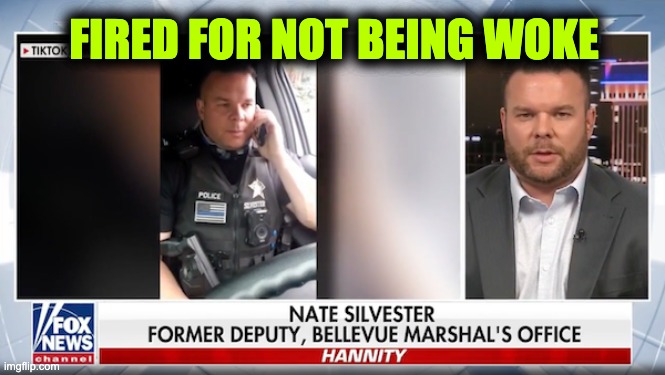 A week before Silvester posted his video, the ignorant LeBron James posted a photo of the officer that fired the shots that killed 16-year old Ma’Khai Bryant. The Tweet had the caption “YOU’RE NEXT #ACCOUNTABILITY” and an hourglass emoji. While it’s absolutely tragic that the 16-year old girl is dead, it’s important to note that the Cop shot Bryant to save another girl. Ma’Khai Bryant had just shoved one girl down, attacked another girl, and was raising a knife while pinning her against a car when the officer opened fire. If he hadn’t acted, the other girl could have been killed or, at the very least, seriously injured.

After the video went viral, Nate Silvester was placed on administrative leave. He was allowed to return to work on May 6th. Just three weeks later, on May 27, he was fired because of his videos (though the mayor denied it). Bellevue Mayor Ned Burns said Silvester violated “several” city and state policies on policing during the week of May 20. Because of previous policy violations, Silvester had been placed on a “last chance agreement” with his commanding officers.

The decision was solely made by the command structure within the Bellevue Marshals office and was not influenced in any way by me or by the City Council,” Burns insisted, asking for “calm and understanding.”

The mayor wasn’t lying.  The Deputy wasn’t fired for the content of his speech —he didn’t make speeches. Nate Silvester was fired for the content of his videos. Most of them were funny. Silvester tried to humanize police work. But His last video was issued earlier this week before being fired showed gunshots being heard at George Floyd Square in Minneapolis on the anniversary of Floyd’s death and ends with Silvester saying, “I can’t think of a more fitting way to celebrate the memory of a career criminal than to have a shootout in the middle of a public street.”

That had to upset the same woke bosses that were pissed of about his video mocking LeBron James.

The fired deputy appeared on The Sean Hannity show a few hours after his firing and said:

“I am the latest target of cancel culture, Sean. That’s all it is,” former Bellevue deputy marshal Nate Silvester told “Hannity” on Thursday. “None of my other videos that depicted me in my uniform or involving body camera footage, none of those mattered. They didn’t care about those. It wasn’t until my LeBron James TikTok struck a political nerve that they started to pay attention and complain about it and came up with forms of discipline.”

Was his George Floyd video the straw that broke the camel’s back? Despite the mayor’s denials, it sure seems that way.

Below is his Hannity Interview: