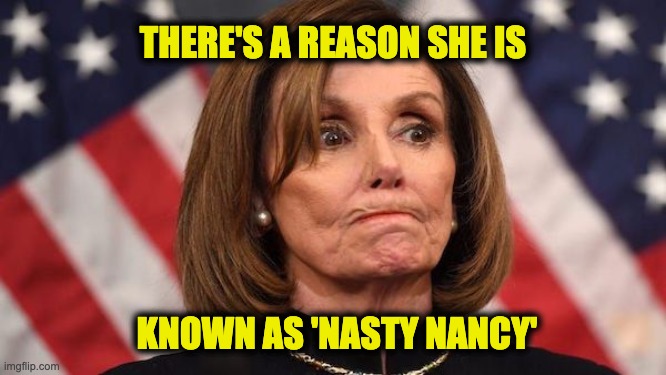 You’d think politicians would understand by now that they aren’t going to get away with lies. Sure, the mainstream media serves as the communications wing of the Democrat Party and covers for them as often as possible (which is every single day), but in the end, facts don’t lie—politicians do. Nancy Pelosi is different though, she doesn’t lie to make herself look good, she lies about her political opponents to make them look bad. That’s why she’s known as Nasty Nancy Pelosi.

Here’s the latest lie from the Speaker of the House…

House Speaker Nancy Pelosi (D-CA) falsely suggested during an interview on Tuesday afternoon that she never called federal law enforcement officials “stormtroopers” and claimed that she said that they “acted like stormtroopers,” which is not what she said.

Pelosi directly called the officers stormtroopers, which refers to the Brownshirts, a paramilitary organization of the German Nazi Party.

But Nancy Nancy we have proof…

These are not the actions of a democratic republic.@DHSgov’s actions in Portland undermine its mission.

Trump & his stormtroopers must be stopped.

For those who don’ like twitter, six days after sending the tweet above, Nasty Nancy got caught on video calling the federal law enforcement officers stormtroopers, “The use of stormtroopers under the guise of law and order is a tactic that is not appropriate to our country in any way.”

Nasty Nancy’s defeat the opposition strategy is to make false, ad hominem attacks on Republicans…like this one where she claimed that Republican senators are “trying to get away with murder, actually, the murder of George Floyd.

Pelosi accuses Republican senators of "trying to get away with murder, actually, the murder of George Floyd" pic.twitter.com/ip1C2S9ocH

We’re talking about the queen of mean here. She even stooped fat-shaming….calling President Trump, “morbidly obese.”

And the Attorney General also. After the 7/28 Barr testimony to the House Judiciary Committee, Nasty Nancy fat-shamed A.G. Barr. On MSNBC she called AG Barr a “blob” and said that he acted like a “henchman” the POTUS.

WATCH: @SpeakerPelosi likens AG Barr to a "blob," arguing he has acted more like a "henchman" for Trump than the Attorney General of the United States. pic.twitter.com/qEg7K6lhZg

Er…Madam Speaker…people in glass houses. I don’t see a line of people begging to see you in a bikini.

People wonder why the Democrats and Republicans cannot work together.  When the leader of the Democratic Party begins negotiations by insulting the other side—what exactly do you expect?  Yes, Schumer acts like he reports to Nasty Nancy, so she is the de facto leader of the party.  And if (God forbid) Biden wins the election who do you think will be giving Dementia-Joe his far-left marching orders.

With the Speaker’s strategy of attack, it’s kind of surprising she hasn’t announced that Republicans don’t call their mothers, fart on public transportation,  or they kick cute puppies. The truth is that Nasty Nancy Pelosi will never change and she sets the policy for her party. Her lies and nastiness are more reasons to vote the Democrats out of power in November.