The Blast Didn't Target People, It Targeted A Thing. 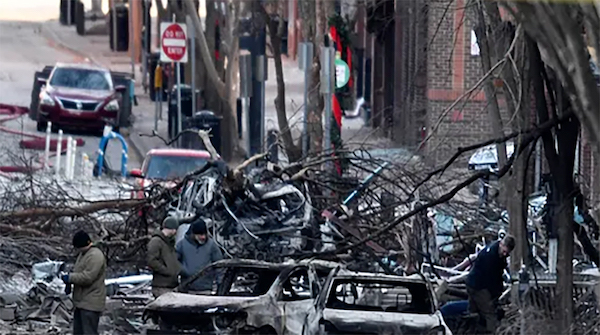 On Christmas morning, the city of Nashville was rocked by a violent and devastating explosion just yards away from one of the busiest tourist thoroughfares east of the Mississippi River. As the investigation is continuing, it appears that the target of this complex scheme was not to hurt anyone, but rather some thing. According to a report, the FBI is asking if the person of interest in the Nashville bombing, Anthony Quinn Warner, a local computer expert was paranoid about 5G technology. The Nashville police confirmed that Warner was a person of interest in the Nashville bombing.

But there were only a few non-critical injuries in Music City, thanks to the person who rigged his explosive RV with a lengthy and detailed loudspeaker warning that counted down to the blast itself, admitting in the recorded message that the vehicle was set to detonate and the early timing of the explosion.

Furthermore, a large volley of gunfire just an hour ahead of the explosion drew police into the area.  Upon hearing the aforementioned warning, these brave officers remained in the area to help wake the locals and move them to safety.

Nashville’s News 4 (WSMV) reports that law enforcement is now working a particular and paranoid angle in the case.

News4 Investigates has confirmed FBI agents spent Saturday speaking with a top Nashville real estate agent, who contacted them after fearing the subcontractor who worked for him may be the same man whose home they were searching.

Other federal agents spent much of the day searching the Antioch home of Anthony Warner.

Realtor Steve Fridrich contacted the FBI after reading Warner’s name, as for several years, a man by the name of Tony Warner had worked for him for several years doing information technology work.

Fridrich confirms that agents asked him whether or not Warner had paranoia about 5G technology.

The 5G paranoia angle has already been posited by several online investigators due to the rather apparent targeting of the AT&T data center in front of which the exploding RV was parked.

Fridrich told the FBI that Warner never mentioned to him that he was worried about 5G:

Fridrich confirms that agents asked him whether or not Warner had paranoia about 5G technology.

Fridrich told the agents that Warner had never spoken to him about that.

But a source close to the federal investigation said that among several different tips and angles, agents are investigating whether or not Warner had paranoia that 5G technology was being used to spy on Americans.

A spokeswoman for the FBI said they could not comment because of the pending investigation.

As the RV was parked across from the AT&T Datacenter, the 5G angle makes sense. However, keep in mind this is one of the possibly many angles the investigation is persuing. Until the FBI says definitively that this was the reason for the bombing–it’s only a possible motive. But we should have confirmation of the motive during the next few days.