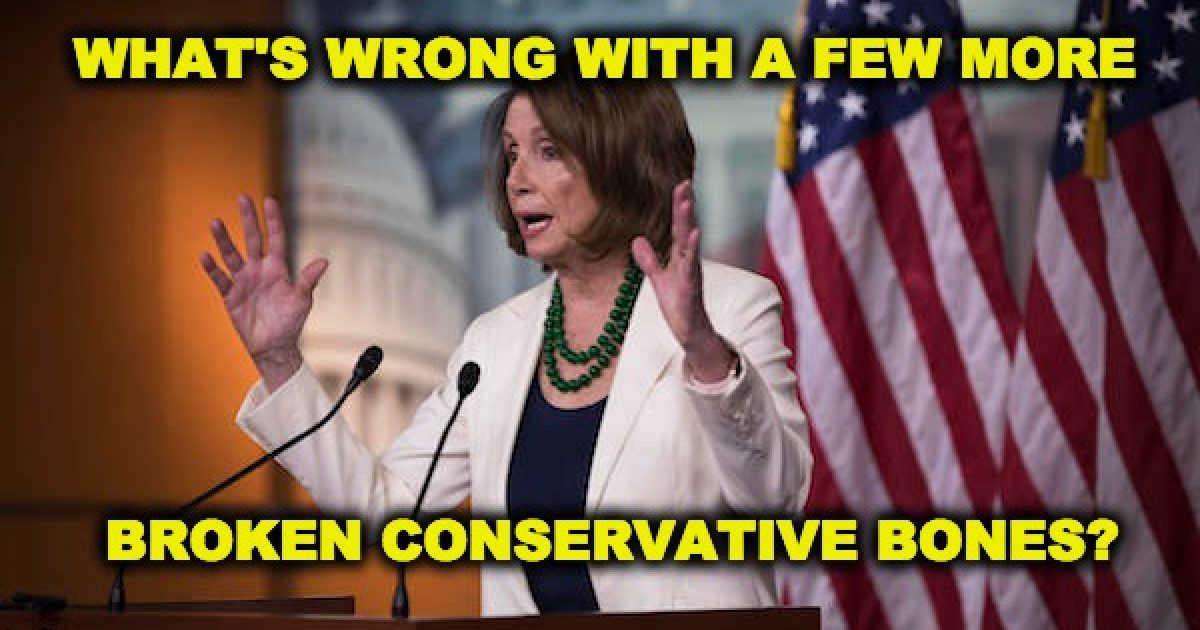 Liberal big shots such as Rep. Maxine Waters, Sen. Sparticus Booker, Loser Hillary Clinton, and even the former attorney general Eric Holder have incited rank and file liberals to commit actual acts of violence. And each day it seems like another conservative if being attacked in a bar, restaurant, elevator, or another GOP headquarters is vandalized or burned down. One would expect the liberal leadership to join the big shot conservatives to call for an end to the violence, but Nancy Pelosi may have endorsed the mayhem.

“We owe the American people to be there for them, for their financial security, respecting the dignity and worth of every person in our country, and if there is some collateral damage for some others who do not share our view, well, so be it, but it shouldn’t be our original purpose,”

Now Pelosi didn’t specify what she meant by collateral damage. She may have meant hurting the middle class by killing the economy like the Democrats did during the Obama administration. Or she could have meant taking away our doctors and ensuring that the old and sick are left to die like other single-payer healthcare systems like the ones in Canada or Great Britain. Or even ruining the reputations of honorable people like the Democrats did with Justice Kavanaugh. However, even if she didn’t mean it that way, the fact that liberal violence has become so common-place lately, it is open to that interpretation by the crazies who are looking for a reason to beat up some conservatives.

The RNC tweeted out the video and as one might expect Pelosi’s comments didn’t get a great reception on Twitter.

My god, I hadn’t realized that much stupid could fit on one stage and still have space for more

Exactly what does she mean by “collateral damage”? She is advocating violence along with her fellow progressives like Obama, Holder, Jarrett, Waters, Booker etc! The all need to go! #votedemsout

This next one must have come from someone with a Ph.D. in biology. This is how they make a Nancy Pelosi

Gee, will someone tell CNN?

@BrookeBCNN didn’t get the message that her party’s leadership is in fact promoting the formation of a violent mob. I would stay away from Congressional baseball practice fields for a while with this kind of rhetoric coming from Dem leadership. #Mob #MobViolence #MobRuleDemocrats

And sadly along with the politically directed violence, this is another violent result of Democratic policies:

I love how Nancy Pelosi glosses over “collateral damage” from her failed policies. At least nine people were killed by illegal immigrants who were previously known to law enforcement in her own district. pic.twitter.com/1UZklOBf1k

If the Democrats control the House of Representatives, Nancy Pelosi will be Speaker of the House and that will be collateral damage for the entire country.