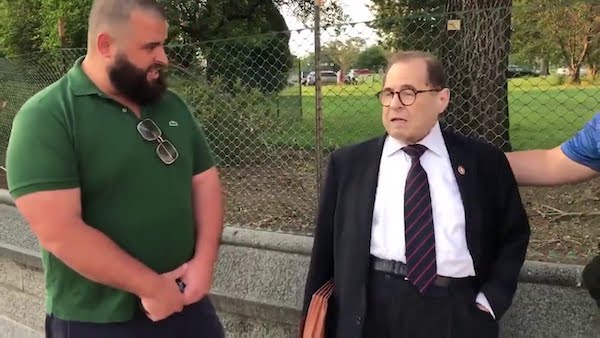 In a video posted to Twitter on Sunday night, Rep. Jerrold Nalder (D-NY) said the violence perpetrated by Antifa and BLM in Portland is a “myth.” He really did!  Conservative filmmaker ‘Fleccas’ wen to Washington DC. While in the capital, he ran into Nadler (possibly working on his next impeachment hoax.)  When he saw the House Judiciary Committee Chairman, Flecca asked the political hack to disavow the Antifa violence/rioting in Portland that had been taking place in Portland continuously for almost sixty days. Like any other politician who only cares about politics instead of the country, Nadler responded, “That’s a myth that’s only being spread in Washington, D.C.”

“About Antifa in Portland?” Fleccas pressed. “Yes—” Nadler claimed. A person with Nadler, presumably an aide, rushed in to get Nadler away from the camera and took him to a car nearby. As Nadler was walking to the car, Fleccas added, “Sir, there’s videos everywhere online. “There’s fires and riots, they’re throwing fireworks at federal officers. DHS is there. Look online. It gets crazy, Mr. Nadler.”

I ran into Jerry Nadler in DC and asked him to disavow the Antifa violence/rioting in Portland.

Holy Cow! Does Nadler have access to the internet? TV News? Or a Newspaper?  Because the Portland riots have been covered, Perhaps he thought that Fleccas was talking about Portland Maine.

Perhaps he doesn’t know about COVID-19 either because he’s not wearing a facemask even though his Democratic Party colleagues have been beating up on the POTUS when he isn’t wearing a mask.

This short video about what is going on in Portland proves Nadler doesn’t know what he’s talking about.

Maybe it’s just that Nadler has a soft spot for ANTIFA. Just a month ago, he claimed the domestic terror group was imaginary.

Author, former Navy Seal, and FBI agent Jonathan Gilliam reacted to the Nadler video with some truth, saying If Nadler is a true representative of his constituents, they all need professional help.

.@RepJerryNadler has appeared on video saying that #AntifaTerrorists committing violent acts in #PortlandRiots is just a myth created in by Washington DC.

Way to go #NYdistrict1! If he is a true representative of his constituents, you all need professional help.

…..but comments like the ones he’s made about Antifa, prove Nadler could also use professional help.