Says Trump Worked With Russians In 2016, But Mueller Report Says NO. Did he read it? 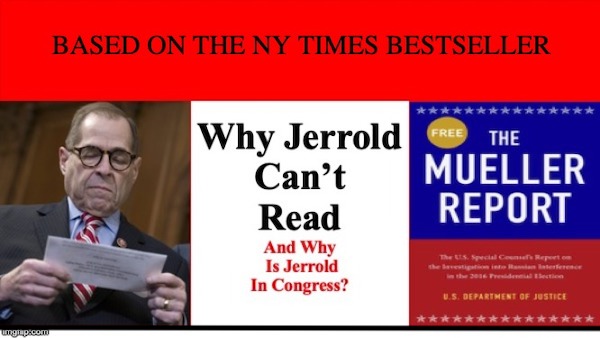 While appearing on CBS’s Face the Nation, House Judiciary Chairman Jerrold Nadler,(D-NY), claiming that President Trump “tried to work with the Russians to rig the 2016 election,” even though the Mueller report clearly states the opposite. This raises the question, is Nadler lying, or is he illiterate? Nadler can’t read

“There is ample evidence, overwhelming evidence. Any jury would convict in three minutes flat that the president betrayed his country by breaking the law,” said the congressman whose girth is being held under control by one staple. He continued, “The GAO, the General Accountability Office, just came out this week and pointed out that withholding money from– from Ukraine that Congress had appropriated is against the law. That’s true, but there were seven times that the GAO found the Obama administration to have broken the law for similar issues.  Nadler was in congress when that happened. Perhaps he can’t handle the pressure of being House Judiciary Chair, and it’s affecting his memory. Well, either that or he is simply trying to railroad the President.

Nadler continued, “But we didn’t need them to tell us that. And the reason he did that was in order to extort a foreign government to– to– to smear his political opponents for his personal benefits and to help try to rig the 2020 election as he worked with the Russians to try to rig the 2016 election. Same pattern.” HUH? Did Nadler miss the Mueller report? It was in all the papers, even on TV. One of the conclusions of the report was that neither Trump, anyone in his campaign, or anyone else in the United States, worked with the Russians.

But making baseless accusations to justify sham investigations has never been a problem for Pelosi, Schiff, and Nadler. pic.twitter.com/3Roq6AYsQ8

Perhaps the reasons for Congressman Nadler’s false and misleading statements is that he can’t read. That would explain why he didn’t know about the seven times the GAO found Obama broke the law or the conclusions of the Mueller report. It also explains why Nadler supported the horrible Iran deal, he couldn’t read it.