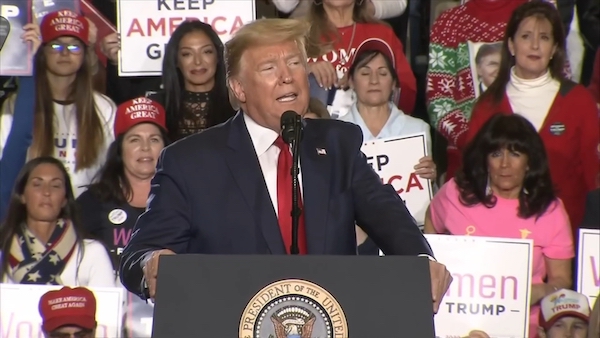 The open hostility between Trump and the liberal media isn’t showing any signs of slowing. But who’s winning? This clip from the N.J. Trump rally says it all.

Trump has had a love-hate relationship with the media.

For years, he’s been a media darling, because he’s always been a natural showman. He’s always been good for a soundbite. He’s was a go-to guy for commercials, especially for burgers or pizza.

Then, when he announced his candidacy, the media thought it was hilarious. They could prop this guy up and give him all kinds of attention. That way, the unserious candidate sucks up all the attention while the ‘real’ Republican candidates like Ted Cruz, Marco Rubio and the rest get starved out.

He’s a fricken Reality TV star and billionaire playboy. Who could honestly take this guy seriously, they thought.

This had the added bonus of giving them an excuse to cash in on the Trump-related ratings.

Then Trump won the nomination… and suddenly, their little joke wasn’t funny anymore. He was the enemy and they threw everything they could at him.

We watched them all cry when he won. And Trump did the unthinkable. Instead of kissing the ring (and their arses) like Republicans before him, Trump treated them with the contempt they deserved.

‘You Are Fake News’

And the fight has been out in the open ever since.

But every attempt the Democratic-Party-controlled media has made to take down this Republican President has blown up in their face. The Russia Collusion conspiracy they were handing out Pulitzers for? Mueller came up empty. Financial ‘experts’ promised doom and gloom under Trump, but the US economy has been the envy of the world.

The impeachment circus was supposed to take down Trump, but his approval is better than ever… crowds in New Jersy are camping out for more than a day in advance in freaking January just to see him.

The parking meters near the convention center were not turned on. But to ensure the protection of the president there were a number of restricted roads near the Wildwood Convention Center and signs on the street indicated it. The signs didn’t say the rules were for everyone except news trucks. Anyone who parked in a restricted area would be towed, the Wildwood police officials warned.

And this video clip taken in this week’s New Jersy Trump rally is the perfect metaphor for how that battle between Trump and the media is going. Make sure to listen to the sound also.

CBS truck just got towed from the Trump rally in Wildwood pic.twitter.com/AbFOvNQruc

And as the CBS truck is towed away, there’s the sound of people saying “Thank You, President Trump.” Were they saying it about the truck being towed? How Perfect!

Much of this post was first seen at  Clash Daily