The Myth of The Tolerant Left 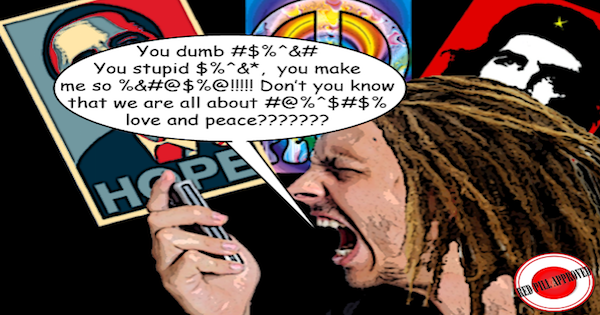 The idea of a tolerant Left is a lie.  I use the term Left to encapsulate progressives, social justice warriors, anti-capitalists etc.  It is a great big lie that has been told over and over again with such vehemence that a lot of people accept it as being true.  The Left is tolerant of peoples opinions…so long as those opinions agree with the agenda of the Left.  If not they will try and intimidate you by harassment, bullying, violence or trying to shout you down when you try to make a point.

They are the most intolerant of people.

One need look only to when the Left gather and try and protest something.  Rather than any type of exchange of ideas or simply the notion of a peaceful protest, the Left gets belligerent and violent.

Here’s a video of a girl who had her hair lit on fire by at “tolerant” lefty simply because she was a Trump supporter:

Then you have Hollywood tough guy Shia Lebeouf getting physical and trying to intimidate someone smaller than he is, by screaming in his ear repeatedly.

Real tough there Shia LeBeouf, you got 3 inches and probably 50+ pounds on the guy.  You’re such a hero for the tolerant Left.  I’ll tell you what, you look me up next time you’re in Pittsburgh and try and shout ME down.  I promise you I will not be intimidated.

I could continue to post video after video of the “tolerant” Left violently attacking people they disagree with or I could show a video of that pig Madonna saying she would like to blow up the White House.  The tolerant Left is also great when it comes to hypocrisy because if anyone said that while Obama was in power they would have screamed themselves hoarse to try and get that person arrested.

But I digress.  Let’s get back to how the tolerant Left is tolerant of other points of view.  Namely those spoken by Milo Yiannopoulos.  First there are the liberal University’s themselves that have often times made it financially impossible for student groups to have Milo on campus as the colleges create new fees and costs just to dissuade Milo’s presence.

The real problem though is that a number of Milo’s talks at college campuses have been disrupted by violent protesters of the “tolerant” Left who have blocked, bullied and beaten people who have attempted to hear him speak.

And that is where this whole article is leading to.  Safe Spaces.

(grins) It’s not what you think.  Here’s a photo

Celebrating the end of the 8 year long nightmare with some good Scotch, a Vindicator cigar (seemed apropos) and my mobile safe space in case some delusional anti-Trump person thinks its ok to try and smash my head in with a stick. Today is a good day #maga #trump

See, my suggestion for dealing with the intolerant Left is to carry your mobile safe space wherever you go.

That way, when the “tolerant” Left has so much tolerance for you they want to beat you to death you can use your mobile safe space to remain safe.

A lesson learned at the most recent Milo event in Seattle.  A 50 year old Asian man was assaulted by a group of “tolerant” Lefties outside the auditorium that Milo was scheduled to speak at.  This group of tolerance surrounded this Asian man and started screaming at him and laying hands upon him in an attempt to intimidate him.

Well…it worked.  The Asian man was so intimidated that he feared for his life, drew his sidearm and shot one of these punks in the stomach.  Like the cowards they were, the rest of the cockroaches scattered and the Asian man and his friend were uninjured.

They later turned themselves in to the police, told them what happened and were released without being charged as the shooting was viewed as an act of self defense…which it completely was.

The guy who was shot was in critical condition but it has been upgraded to stable…meh.

The point remains that this Asian man could very well have ended up like so many other people that the “tolerant” Left has not tolerance for.  Bloody and broken and lying in the street.  Instead, he utilized his 2nd Amendment rights and put one of these hate-mongers from the left with a foot in the grave and that’s a good thing.

Until the “tolerant” Left realizes that those who disagree with them will no longer be victims of their intimidation, harassment and violence, such things will continue.

So I say, always carry your mobile safe space with you and do not be afraid to utilize it if you are in fear for your safety by a mob of people trying to trample on your right to speak or exist.  It doesn’t matter how “tolerant” they say they are when they are curb stomping your head.