Primer For The Jewish Holiday Of Shavuot For Jews AND Gentiles 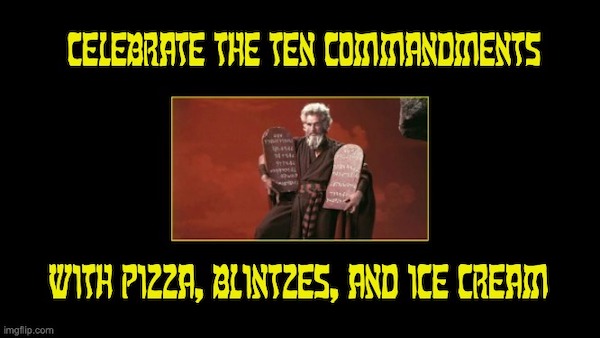 Beginning with sunset on Saturday evening, June 4th, Jews worldwide will start to observe Shavuot, my favorite Jewish holiday (more on that later). Shavuot commemorates that incredible day when God gave the newly freed Hebrew slaves the Torah and what is popularly known as the Ten Commandments.

People in the US (including many Jews) might think Chanukah is the major Jewish holiday. Actually, it is a very minor holiday. Shavuot is one of the three major festivals (the other two are Passover and Sukkot). In biblical days, Jews would travel from all over the Holy Land to Jerusalem to make a sacrifice at the Holy Temple during each of those three festivals.

But that wasn’t the only reason. God chose a moderately-sized mountain because he wanted to teach that man did not have to be large in stature to meet his potential. Another reason Sinai was chosen was that it was outside of the Holy Land. The laws given at Sinai are fundamental and should apply to all people. Since the commandments were given outside of the Holy Land, God could legitimately demand that these basic rules about how people should live their lives apply not just to Jews but to all people.

Some readers may be thinking, “It is all a fable and never really happened.” I bet those folks also believe that the moon landing was staged. Unlike the moon landing, there is no way to prove the story of the revelation at Sinai happened (that’s why it’s called faith). But ponder this: There were more than six-hundred thousand witnesses. Not one of those witnesses wrote a minority opinion. There are no accounts from that time saying the entire lawgiving thing was done on a sound stage in Brooklyn, that it wasn’t God from on high, or that it was Moses wearing stilts while reciting the commandments off his iPad and speaking through a bull horn.

Folks, we are talking about the word of God—the, the creator of the universe. The omnipotent being who boldly went where no man had gone before (or again) countless billions of years before James Tiberius Kirk appeared on TV screens. There is no being in history more supreme. God’s words needed no embellishments. Therefore, as an example, it’s not “Thou shalt not steal,” as it reads in many English translations. The original Hebrew translates into a simple “Don’t Steal.” Less bandwidth!

Yitro gets the honor because at the beginning of this Parsha he sits Moses down and explains to his son-in-law to delegate some responsibility. That way, he can spend more time with his family. From this, we learn that to God, Shalom Ha-Bayit (peace in the home) is more important than anything, even the revelation at Sinai. Mankind spending time with family is important to God. We also learn from the name of this Torah reading that fathers-in-law are not only allowed to but are supposed to butt in—at least, that’s what my father-in-law tells me.

The sages tell us that this verse means that God was waiting for the Hebrews to wake up, but the newly freed slaves forgot to set the alarms on their iPhones and overslept. The Lord had to make a heck of a racket to get them to wake up. That’s why on the first evening of the holiday (Saturday night this year), synagogues worldwide have what’s called Tikkun Leil Shavuot (repairing the evening of Shavuot). Jews spend all night studying Torah to make up for the fact that they screwed up and overslept at Sinai. It’s an attempt to show God that we appreciate the Torah he gave us, and no one will be grabbing an extra few winks this time. To help them stay awake–Jews eat good stuff while studying all night.

Because on Shavuot, Jews celebrate the day they were given the Torah, they only eat dairy during the holiday. We’re talking about 48 hours of pizza, blintzes, and Oreo cookie ice cream (to be truthful, if you have ice cream on the holiday, any flavor is okay, Oreo cookie is what I will be feasting on. That’s why Shavuot is my favorite Jewish holiday. The two days of Shavuot are the only two days of the year I can tell my wife, “Yes honey, I am a diabetic, and the doctor did tell me to lose weight. But this is not splurging. I am only eating this pint of ice cream because I am observing the holiday. Practicing one’s faith doesn’t get any better than this.

An old story about a religious school. In a Gan class (kindergarten), a teacher is talking to her students about the holiday of Shavuot.

“Okay, Class, who knows why we celebrate Shavuot?”

“Oooh, I know,” said little Karen, “Shavuot is when we light candles and celebrate the Maccabees.”

“No, Karen, that’s Chanukah but good try,” said the teacher. “Anybody else?”

Shmuley raised his hand. “Shavuot is when we wear costumes and play with noisemakers.”

“Sorry Shmuley, that is Purim.” the teacher said.

A little boy in the back of the room who had never raised his hand all year long tentatively raised his hand. “Yes Johnny?” said the teacher hopefully.

“I know Shavuot,” Johnny said softly,” You see, Moses went up the mountain and stayed for 40 days and 40 nights.”

Johnny continued, and with each word out of his mouth, he seemed to gain confidence, “And40 days Moses came down the mountain carrying two stone tablets that had the Ten Commandments on them.”

“Keep going,” said the teacher, excited that one kid knew the answer.

A confident Johnny concluded, “And if he sees his shadow we have six more weeks of winter.”

Oh, and about those ten words (commandments) written on the two tablets that an 80-year-old Moses brought down from Mount Sinai (twice), below is a cross-post of what was written on those tablets translated from Hebrew into English:

1) You are to have no other gods before me.

2)  You are not to make for yourselves a carved image or any kind of representation of anything in heaven above, on the earth beneath, or in the water below the shoreline. You are not to bow down to them or serve them; for I, the Lord your God, am a jealous God, punishing the children for the sins of the parents to the third and fourth generation of those who hate me, but displaying grace to the thousandth generation of those who love me and obey my mitzvot.

3) You are not to use the name of the Lord your God lightly because the Lord will not leave unpunished someone who uses his name lightly.

4) Remember the day, Shabbat, to set it apart for God. You have six days to labor and do all your work, but the seventh day is a Shabbat for the Lord your God. On it, you are not to do any kind of work -not you, your son or your daughter, nor your male or female slave, not your livestock, and not the foreigner staying with you inside the gates to your property. For in six days, the Lord made heaven and earth, the sea and everything in them; but on the seventh day, he rested. This is why the Lord blessed the day, Shabbat, and separated it for himself. [Think about that it was the first time in history there was a designated day off….and it wasn’t even a union demand].

9) Don’t give false evidence against your neighbor [Note: this is Al Sharpton’s least favorite of the ten.]

Folks, Chag Shavuot Samayach (Happy Shavuot Holiday). And whether you are Jew or Gentile, remember to eat lots of your favorite flavor of ice cream (it’s God’s will).