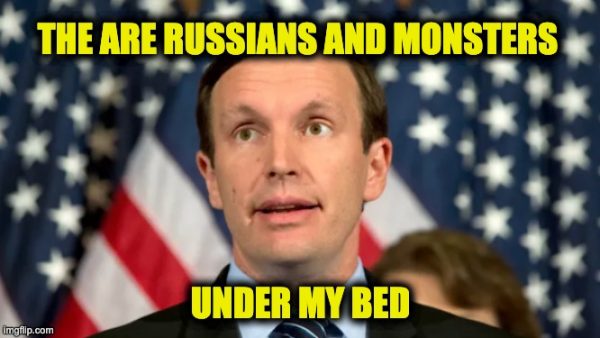 It seems that Democrats now have a standard for dealing with anything that puts their candidates in a bad light — blame Russia.  That’s the case with Sen. Chris Murphy, who is very angry that the media isn’t completely ignoring the Hunter Biden story.

He’s also of the opinion this was all cooked up by the Russians (who happen to be everywhere, you know) who apparently turned Rudy Giuliani into an asset.

We’re not kidding.  The Trump Derangement Syndrome is powerful with this one.

Chris is furious that the media couldn’t stop the spread of this story. They sure as hell tried to stop it. https://t.co/Hqp6hWQmSA

2/ Russia knew it had to play a different game than 2016. So it built an operation to cull virulently pro-Trump Americans as pseudo-assets, so blind in their allegiance to Trump that they’ll willingly launder Kremlin constructed anti-Biden propaganda.

Guiliani was a key target.

4/ Whether he knows it or not, Giuliani is effectively a Russian asset now. It’s almost certain that any anti-Biden info he has is fed to him by Derkach and Russian intel.

This should be patently obvious to any reporter worth his or her salt. https://t.co/PWPRBRGALU

The guy seems kind of paranoid. Do you think that when he goes to sleep at night, Chris Murphy checks under his bed and in the closet for Russkies? Maybe he thinks they are playing with the monsters under his bed that he imagined as a child.

Do you see the trend here?  Something bad about their guy comes out.  Instantly, Facebook and Twitter jump in to provide cover while giving them more excuses to censor conservatives.

Instead of seriously considering the allegations, Democrats immediately jump to “Russia, Russia, Russia.”  Facts be damned.

Now Chris: let’s assume everything in the laptop story is fake
Aren’t the admitted facts as to Hunter Biden’s willingness to trade on his name to sleazy foreign interests even the least bit unsettling to you?

No, because Murphy, like the rest of the Democrat-media complex, isn’t interested in the truth.  All they care about is the narrative and hurting Trump.

Does it matter if the Hunter Biden emails are, you know, true? If they're not true – forgeries – why hasn't Hunter or the Biden campaign said so (which of course they would do). And if they are real, how is that not a legitimate story to report (even if their origins also are?). https://t.co/fjOm2jpgI8

Because truth doesn’t matter to Murphy or his colleagues on the left.

Then there’s this take:

Remember how leftists screamed "THREAT TO OUR DEMOCRACY!!!!" every time @realDonaldTrump tweeted criticism of the press? Remember how they screamed "RUSSIA" for 4 years when they knew collusion was a lie? https://t.co/bnfCvGANV7

By the way, we are told the FBI is investigating the emails, but only to see if they are, in fact, Russian disinformation.

The FBI is reportedly investigating whether emails published Wednesday by the New York Post in connection with widely discredited corruption allegations about Hunter Biden are part of a possible Russian effort to spread disinformation ahead of the presidential election.

NBC News first reported the existence of the investigation, followed by the Associated Press and CNN, which cite administration and congressional sources.

The alleged emails came to the Rupert Murdoch-owned tabloid through President Donald Trump’s personal attorney, Rudy Giuliani, who claimed to have acquired a copy of a computer hard drive belonging to the son of Democratic presidential nominee Joe Biden. The authenticity of the emails has not been independently verified, and reporters pointed out major errors and holes in The Post story after it was published.

Fox is saying the FBI is investigating the Hunter Biden emails! I cheered. Then they said they are investigating WHETHER THEY CAME FROM RUSSIA! Disband the FBI. This is ABHORRENT. ?

In a statement, Biden campaign spokesman Andrew Bates said, “we have reviewed Joe Biden’s official schedules from the time and no meeting, as alleged by the New York Post, ever took place.”…

Biden’s campaign would not rule out the possibility that the former VP had some kind of informal interaction with Pozharskyi, which wouldn’t appear on Biden’s official schedule. But they said any encounter would have been cursory. Pozharskyi did not respond to a request for comment.