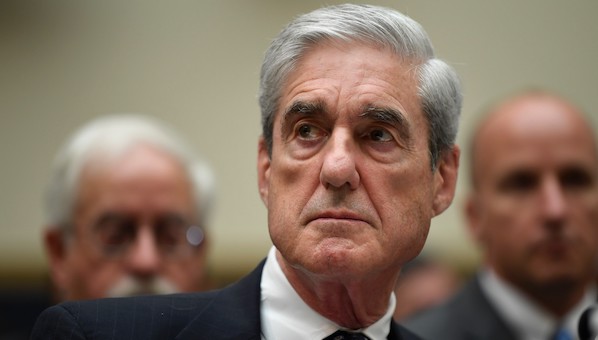 For anyone who thought it was pretty shady for Mueller’s ’13 Angry Democrats’ to throw the book at Republicans while handing out immunity to highly-connected Democrats — keep reading.

After thirty-some-odd million dollars of criminal investigation, Mueller found no smoking gun to prove that central allegation. When Mueller sat down and was questioned about it, the public openly wondered if the man would be safe to drive his own car on public roads, let alone run such a highly-sensitive investigation.

Now Durham has been unleashed to discover the origins of Spygate and — where appropriate — recommend criminal charges against any parties who broke the law. That is how investigations are supposed to work. Examine events and look to see who may or may not have broken the law, rather than examining people with the goal of building a criminal case against them. That sort of approach is the domain of Democrats and Banana Republics.

Margot Cleveland — who has been doggedly covering the Spygate from the beginning — has discovered a connection between tech sources that appear to have been driving the allegations behind Trump and the Mueller investigation itself.

The Georgia Tech researchers embroiled in the Alfa Bank hoax prepared white papers for the U.S. Department of Defense about the Democratic National Committee hack and created a “Mueller List” on the Russian intelligence agency hackers, the newly obtained documents indicate. The white papers were prepared for the Defense Advanced Research Projects Agency (DARPA), a section of the U.S. Department of Defense.

…Listed under the heading of “DARPA whitepapers” were four documents, including “Whitepaper on DNC attack attribution”; Analysis of attacks of EOP (Executive Office of the President) networks”; “Whitepaper for DOJ on APT-29 related hackers, crypto coin transactions, and analysis that includes Yota-related domains”; and “‘Mueller List’—list of domains and indicator related to APT-28.”

Of these DARPA whitepapers, the first and fourth both relate to the DNC hack, with the final paper also connecting to the Mueller investigation. APT-28 is the more formal name for the Russian intelligence group of hackers known colloquially as Fancy Bear. As part of his investigation, Mueller charged 12 Russian intelligence agents allegedly working as Fancy Bear with crimes related to the DNC hack.

…The above email raises a second question worth probing, namely whether tech executive Rodney Joffe used the whitepaper Georgia Tech researchers prepared for DARPA on “Yota-related domains” in his continued attempt to frame Trump as colluding with Russia.

It makes this scribbler wonder: if Mueller based his report on sources that were shown to have violated the law by deliberately framing an innocent man, wouldn’t the ‘fruit of the poisoned tree’ doctrine discredit the entire Mueller Report?

Fox News reported that the Alfa Bank hoax was part of the Durham investigation:

Special Counsel John Durham asserted in a court filing that the CIA concluded data from Clinton campaign lawyer Michael Sussmann alleging coordination between Donald Trump and Russia was “not technically plausible” and was “user created.

If all of this checks out, the lawsuit Trump has launched is about to get even more interesting.