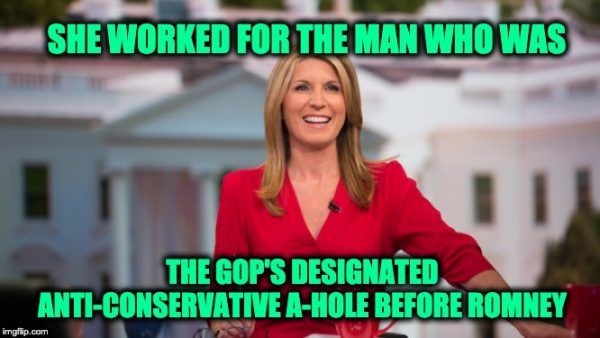 MSNBC anchor Nicolle Wallace, voicing blatant solidarity with the Democrat Party while working in a field which feigns fairness, declared President Trump to be “the enemy.”

Wallace made the comments during a wild segment in which she urged the resistance party to come together and defeat the President.

“I understand different views about the system,” she said of infighting Democrats, however, “the enemy is the guy in the Oval Office who thinks there are good people on both sides in Charlottesville.”

Of course, not only is she expressing support for the Democrats, but she’s revealing her bias by mentioning the media-generated Charlottesville hoax that we’ve debunked time and time again. And so did Dennis Prager.

Enemy of the People? Trump enemy

Now, wait a minute. Clowns in the media have repeatedly told us that referring to somebody as an ‘enemy’ is putting their lives in danger. How does Wallace get away with this? It’s not because she used to be a Republican. After being Bush #43’s communication director, Wallace served as a senior advisor for the McCain–Palin campaign in 2008. You remember McCain? He was the designated GOP anti-conservative A-Hole before Mittens Romney.

Trump is an enemy of Democrats, the media is an ally of theirs and an enemy of the people.

Wallace continued with her rant …

“The enemy is the guy in the Oval Office who got a permission slip to cheat in presidential elections,” she said without evidence. “The enemy is a guy who calls his generals dopes and losers. I am nauseous when I see Democrats fight amongst themselves.”

Wallace concluded by saying she was so disgusted with President Trump that she’d vote for “an automobile” if the Democrats ran one as a candidate.

I thought reporters don’t pick a side… MSNBC’s Nicolle Wallace: Trump Is ‘The Enemy’ https://t.co/vJOygv5w5G

In reality, it is the media that stands as the enemy of everyone with their thoroughly biased coverage and working in conjunction with the resistance party.

We saw the enemy in action recently when the New York Times introduced excerpts from John Bolton’s book in a last-ditch effort to sway the impeachment trial in the Senate.

We see the enemy on MSNBC when their panelists claim the President would like to ’round up people and murder them.’

Or when MSNBC panelists tell their colleagues to openly call Trump supporters racist.

Or when the media colluded with Democrats to doctor the transcript of the Trump-Ukraine phone call to create a narrative that never existed.

“The FAKE NEWS media is not my enemy,” President Trump previously declared, “it is the enemy of the American People!”

Wallace is proving him right.