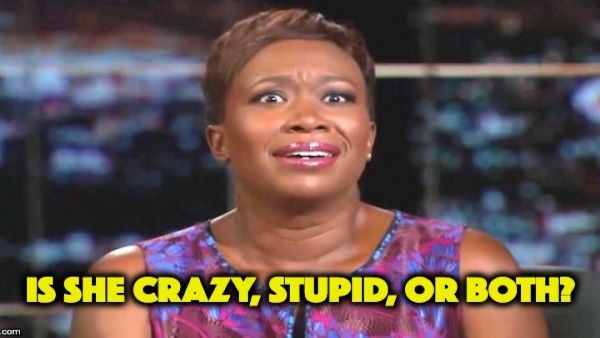 There’s been a lot of fake news and propaganda thrown out by MSNBC, the official network of insane liberal hate, rage, and lying liberal propaganda.  On Sunday, MSNBC racist nutjob Joy Reid tossed in a heaping dose of stupid when she suggested President Trump might use the coronavirus pandemic to reign as a monarch.

“Now, in this show yesterday, constitutional law professor Laurence Tribe of Harvard University confirmed what we suspected all along: that Cuomo was right, and Trump had no constitutional authority to claim he could quarantine whole states. And right on cue, Trump almost immediately backed down, tweeting that he has advised the CDC to issue a travel warning, but that he determined a quarantine will, quote, not be necessary,” she said.   “Not necessary? Man, try not legally possible! But go off, Apprentice guy—go off!”

She was far from finished.

“Of course, it’s hardly news that Trump has always had designs on reigning as a monarch with unlimited power, rather than serving as a mere president in a democracy. But with the country facing an unprecedented public health crisis, what lengths might he, backed by an Attorney General whose writings and actions point to a fundamental belief in an all-powerful presidency—at least when the would-be king is a Republican—what lengths might Trump go to, to expand his power under the guise of national security?”

Ever since Trump took office, liberals and the mainstream media warned that he was a tyrant that would try and become monarch, emperor, or even burger king. Those warnings are totally bogus. It’s just another example of how the slanted media trying to turn public opinion against this President.

Dispatch from the Department of Damned if You Do, Damned if You Don’t: Just two days ago, MSNBC’s sister network was pushing the idea of a “nationwide lockdown” for at least two weeks. But when President Trump floated the idea of something similar for just three states, suddenly it’s an unconstitutional power grab!

In other words, either Trump is a despot, or he’s not despotic enough.

What else can you expect from the official network of insane liberal rage, hate, racism, Antisemitism, lying propaganda, and of course, stupidity?