Preparing For Trump, The MSM Revise Their Glossary Of Political Terms 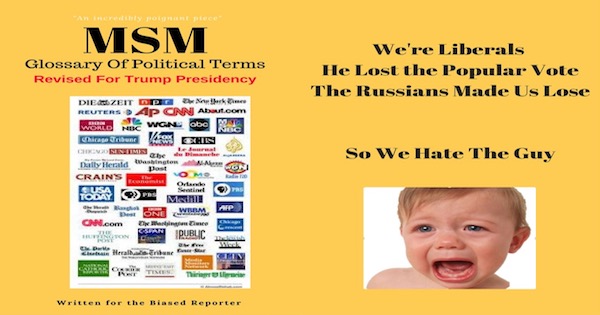 Democratic senators plan to aggressively target eight of Donald Trump’s Cabinet nominees in the coming weeks and are pushing to stretch their confirmation votes into March — an unprecedented break with Senate tradition.

Such delays would upend Republican hopes of quickly holding hearings and confirming most of Trump’s top picks on Inauguration Day. But Democrats, hamstrung by their minority status, are determined to slow-walk Trump’s picks unless they start disclosing reams of personal financial data they’ve withheld so far, according to senior aides.

The reporting was mostly accurate, but the author, Ed O’Keefe, omitted a term that would have been de rigueur in an article on this topic submitted to his editors a mere month ago. The term is obstruction, or in its ideologicized form, obstructionism. It has been a fixture of Post reporting for the last eight years.

This declaration, like the Senate Republicans’ vow that they will refuse to consider— or even meet with — any Supreme Court nominee Obama sends them, is the very definition of blind obstruction. [Emphasis added]

An article from last October, by Greg Sagent, argued that the Republicans’ plan to persuade voters that “a GOP-controlled House and Senate are necessary to act as a check on President Hillary Clinton” was doomed to failure:

But Democrats insist that this message will be a non-starter, and they shared new internal polling with this blog that they argue backs up their claim. Dems say they can rebut the Republicans’ line of attack by pointing out that they are openly, explicitly promising more obstruction in Washington, something swing voters and independents despise. [Emphasis added]

Usually, obstruction and obstructionism are modified by pejorative adjectives, such as mindless, which reflects the WaPo’s strong distaste for this brand of politicking. Which makes it all the more puzzling that the term doesn’t appear — modified or otherwise — in the O’Keefe piece that led of this post.

Surely, what incoming Senate minority leader Chuck Schumer and his band of partisan hacks have in mind is no less an example of obstructionism than what the Democrats have accused the Republicans of doing during Barack Obama’s two terms. In fact, the Dems’ plan is even more odious when you compare apples and apples. Obama’s cabinet picks were confirmed within days of being nominated.

Obstructionism is just one of the terms that will be phased out by the mainstream media for the duration of Trump’s presidency. Others will be highlighted in posts to come.

Cartoon of the Day: Justice is (half) blind
April 11th, 2021 Liberty Unyielding