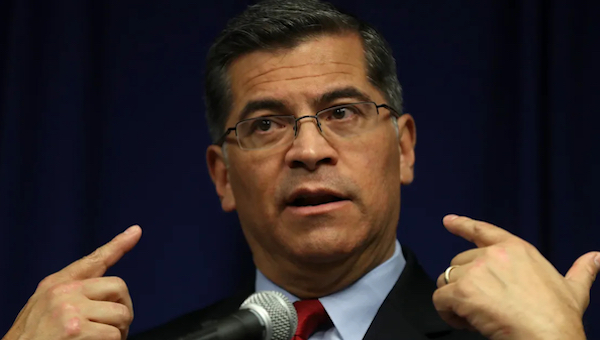 I’ve called for the resignation of several Biden administration Cabinet members, yet perhaps the most unqualified person continues to slip under the radar despite his egregious performance.

President Joe Biden should fire him but will not because the White House runs on identity politics. Becerra, therefore, brings trivial “diversity” to the team, and they like that nonsense while Americans suffer.

Early in 2021, Biden drew criticism from woke Hispanic radicals who wanted more progressive Hispanics elevated to Cabinet positions. Biden panicked and assuaged the radicals, offering Becerra the vital job during a pandemic, despite the Californian being a lawyer with absolutely no executive or medical experience. Even Speaker Nancy Pelosi reportedly “had worked closely with Becerra in the House and viewed him as untrustworthy.”

But now, even the mainstream media is irked.

In some actual journalism, the Washington Post reported that the White House “openly mused” several months ago about replacing Becerra. In a thorough piece, they noted various frustrations and how health officials complained Becerra was “taking too passive a role” on COVID-19 while failing to exert authority.

Despite his woeful record, Becerra won’t be dismissed since the article admits it “would likely draw the ire of the Congressional Hispanic Caucus and other grass-roots groups that pressed Biden to appoint more Latinos to his Cabinet.”

That’s fantastic news — for no one.

In recent months, Becerra has failed again during a new medical crisis. The dawdling federal response to monkeypox — which will not affect most Americans, but it hits a powerful Democrat-voting bloc —  bolsters claims from critics of the HHS secretary.

The New York Times published a brutal report on Becerra’s mishandling of the outbreak, which, according to the gray lady, lacks vaccines because HHS failed “to ask that bulk stocks of the vaccine it already owned be bottled for distribution.”

In the end, the White House’s initially standoffish reaction to monkeypox seems hindered by the same liberal bureaucratic delays that we saw during the coronavirus outbreak.

And again, even progressive pundits now noticed what folks like me knew 17 months ago.

If you still cannot trust me or the two largest newspapers in America, venerable Washington Examiner columnist Tim Carney eviscerated Becerra’s incompetence earlier this month. They argued that “beyond having no competence, experience, or training in public health, Becerra can’t fight this fight because he was brought here precisely to be a left-wing culture warrior. Becerra met Biden’s standards for health secretary because Becerra is an abortion extremist and a culture warrior who relishes in persecuting religious conservatives.”

Indeed, until last year, Becerra’s most noteworthy experience was the appalling lawsuit he filed as California attorney general, forcing the Little Sisters of the Poor to provide birth control to employees.

Wokeism continues to have deadly consequences. Someday the media, leftist politicians, and society should wise up. Maybe Becerra’s comeuppance is a small step?
d
A.J. Kaufman is a columnist for Alpha News and here at The Lid
s