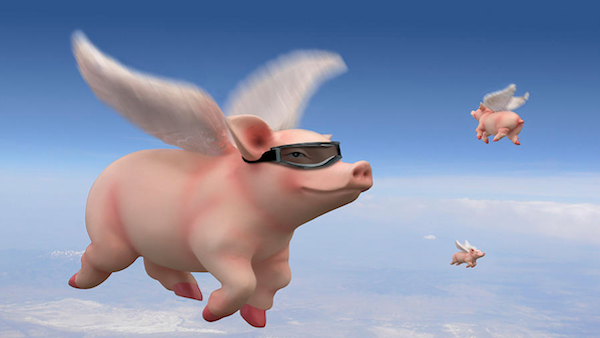 Today must be the 12th of never, because it’s snowing in hell, pigs are flying, the NY Jets are playing in the Super Bowl, rivers are running dry, we are approaching judgment day and MSNBC’s morning host Joe Scarborough stated unequivocally that he believes that Russia had nothing to do with Trump’s victory. Of course later in the show he blasted Trump for his Russian connections

Speaking to in the royal we to journalist Noah Rothman, Scarborough said,

That’s the nicest thing Scarborough has said about the President since he started sleeping with his very liberal co-host. And he is very right about Hillary being a lousy candidate.

Sadly, later on in the show the hosts welcomed fake Vietnam War veteran Senator Richard Blumenthal (D-CT), And  they moved on to attack the President for undermining himself by refusing to toe the line on our relationship with Russia.

What follows is 10 minutes of attacking President Trump for his feelings, comments, and non-action on the Russia/Putin question.

While Scarborough makes a point to say that he’s not equipped to speak to the President’s “state of mind” he does so in a way that is mean to demean the President (since the presidential mental condition is usually all that Scarborough and Mika talk about). Joe and the rest of the panel, excluding Noah Rothman, take turns attacking the President for refusing to vociferously endorse new sanctions on Russia. They also point out that the latest round of Congressional sanctions would be a big step towards undercutting executive power and increasing Congressional power in dealing with foreign nations. While many conservatives would argue that this would be a good thing, the cast at MSNBC’s Morning Joe seem to refuse to acknowledge why a President would be happy to hand over powers that have historically resided in the Executive Branch to the Legislative Branch.

Simply put, there are many reasons that the Trump administration may look to take a different path with Russia than the one that has been laid out by Congress. Particularly, because President Trump campaigned on a shift in relations with the nations that the Obama administration had become antagonistic with (like Russia and China). Indeed, relations with Russia seemed to have a chance at bettering themselves, until the media decided that Russia was going to be the constant focus of every bad thing happening across the planet. Instead of tensions easing and relations normalizing… the media has created a world ripe for chaos.