More Police Killed In 2021 Than Ever Before In Recorded History 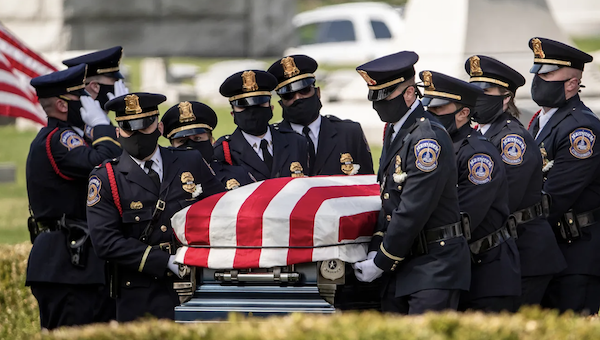 Even the mainstream media admits that the era of  Black Lives Matter, ANTIFA,  and the defund the police movements have led to increased crime throughout the country.  But the part they don’t discuss is that the year 2021 is the most dangerous ever for police officers.

The National Fraternal Order of Police (FOP) noted that even before the last month is up, 2021 has become the most dangerous year for cops in the entire history of the organization’s record-keeping.

Another disturbing trend is that there were reportedly 95 ambush-style attacks thus far in 2021 – a 126% increase compared to 2020. The ambush attacks resulted in 119 officers being shot and 28 who lost their lives.

ENOUGH IS ENOUGH: The violence against the brave men and women continues to rise!

“There is no doubt that the recent erosion of respect for law enforcement has fueled more aggression towards police officers than what has been seen in previous years,” Yoes continued. “As violence continues to be aimed at law enforcement, our officers continue to show up every day to keep the communities they serve safe. These men and women run toward danger to protect the public when everyone else is running away.”

Despite what you may hear from some talking heads, America's #CrimeCrisis is out of control… thanks to Rogue Prosecutors, Activist Judges and #BailReform pic.twitter.com/GW6ebx3894

“Those saying that America’s #CrimeCrisis is not out of control are either not paying attention or trying to cover for the rogue prosecutors pushing radical policies,” the police organization wrote on Twitter. “To the various media folks who’ve been turning a blind eye to the killings in our streets: do your damn job!”

To that statement, I would add when (and if) the MSM does their job,  they should include the killing of the people sworn to protect and serve the rest of us.

Most of this post was first seen at Washington Exterminator.