Will they EVER get the hint? Doubtful. 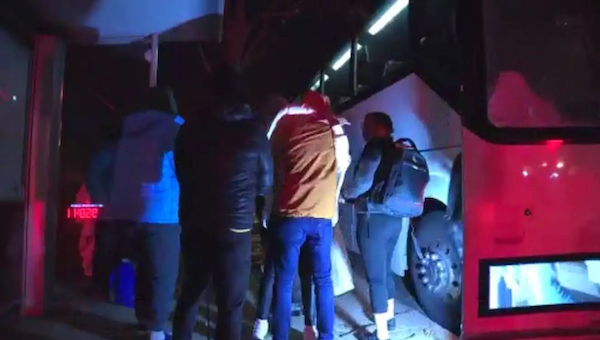 Three busloads of illegals dropped off near VP Harris’ DC residence on Christmas Eve caused Democrats to call it “cruel.” They were likely sent by Texas, although TX authorities didn’t claim the action. Drawing attention to the border crisis by dropping busloads of illegal immigrants appears to have fallen on deaf ears. The expense to border states has grown out of control even as the cities where the immigrants were dropped whine about their costs.

“The buses that arrived late Saturday outside the vice president’s residence were carrying around 110 to 130 people, according to Tatiana Laborde, managing director of SAMU First Response, a relief agency working with the city of Washington to serve thousands of illegal immigrants who have been dropped off in recent months.

Local organizers had expected the buses to arrive Sunday but found out Saturday that the group would get to Washington early, Laborde said. The people on board included young children.

Some were wearing T-shirts despite temperatures hovering around 15 degrees Fahrenheit. It was the coldest Christmas Eve on record for Washington.

Laborde said employees had blankets ready for the people who arrived on Christmas Eve and moved them quickly onto waiting buses for a ride to an area church. A local restaurant chain donated dinner and breakfast.

Most of the arrivals were headed to other destinations and expected to remain in Washington only briefly.” The Epoch Times

The third and final bus of migrants of the night of migrants buses up to D.C. from Texas arriving, with Migrant Solidarity Mutual Aid Network taking them to a church: pic.twitter.com/Y65B8RnilZ

Naturally, Democrats decried the move, calling it absolutely cruel to drop the migrants off in 15-degree weather. Yes, it was a record cold for DC. But Texas faced an arctic vortex that could have been life-threatening as well.

“In a letter Abbott sent to President Biden on Tuesday, the Texas governor cited freezing temperatures in cities like El Paso as his reason to transport the migrants as migrant housing facilities already at capacity have been forced to release people outside onto the streets…

“Your policies will leave many people in the bitter, dangerous cold as a polar vortex moves into Texas,” Abbott wrote. “Texas has borne a lopsided burden caused by your open border policies.”…

“This terrible crisis for border communities in Texas is a catastrophe of your own making,” he wrote. “The need to address this crisis is not the job of border states like Texas. Instead, the U.S. Constitution dictates that it is your job, Mr. President, to defend the borders of our country, regulate our nation’s immigration, and manage those who seek refuge here,” he added.” Fox

Democrats have not done anything to stem the flow of illegal immigrants to the US. They push Biden policies as a solution, but those policies would only exacerbate an already difficult situation. VP Harris’ residence is the only place governors have dropped off busloads of migrants, as we have written previously. The Biden administration has sent them anywhere they want to go into any state. So, the few border states that have bussed illegals to Democrat cities are but a pittance compared to the overall disaster.