Hypocritical Obama Gets Richer With Speeches Blasting ‘Money in Politics’ 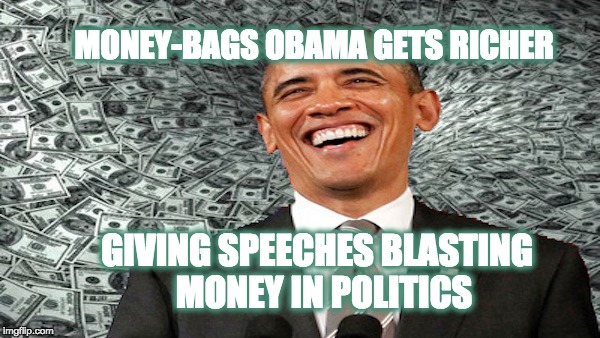 Even liberals were stunned when it was revealed that former President Barack Obama raked in $400,000 for a speech before a Wall Street firm recently.

How can such a guy – who trashed Wall Street ‘fat cats’ and who campaigned on cracking down on them and making them pay more of their ‘fair share’ in taxes – go to a Wall Street firm, give a speech, and take $400,000 of their money in exchange?

As it turns out, $400,000 isn’t all that much compared to how much he’s pulling in for speaking at the Global Food Innovation Summit in Milan, Italy. He’s making $3.2 million (£2.5 million) from his appearances there.

Ironically, last month, during his first speech since he left the presidency, he criticized ‘money in politics.’ Yes that’s the same Barack Obama who refused McCain’s offer not to take outside money in 2008. In fact he refused public financing in 2008 so he wouldn’t have adhere to FEC spending limits.

Was he blasting is buddy Hillary when he talked about money in politics? After all she spent much more money on the presidential campaign. According to Open Secrets she spent about $770 million in total, $206 million in outside money. President Trump spent $408 million, of which $75 million was outside money.

Express pointed out some of the perks Obama enjoyed as part of his speaking appearances in Milan:

The former President, who has already earned hundreds of thousands of dollars for private speeches since leaving the White House, will make his highest-paying appearance yet at the Global Food Innovation Summit today.

President Obama flew into Italy’s business capital yesterday, and according to local media headed straight for the extravagant Park Hyatt hotel, which can cost up to £7,100 ($9,100) a night.

After bringing the city to a standstill with a convoy of 14 cars, a helicopter and a 300-strong police escort, President Obama’s entourage reportedly took over two floors of the hotel.

The former Commander-in-Chief also took a private tour of the Pinacoteca Ambrosiana museum, and the city’s cathedral.

President Obama has enjoyed weeks of holidaying since leaving Washington on January 20, including kite-surging lessons with Richard Branson.