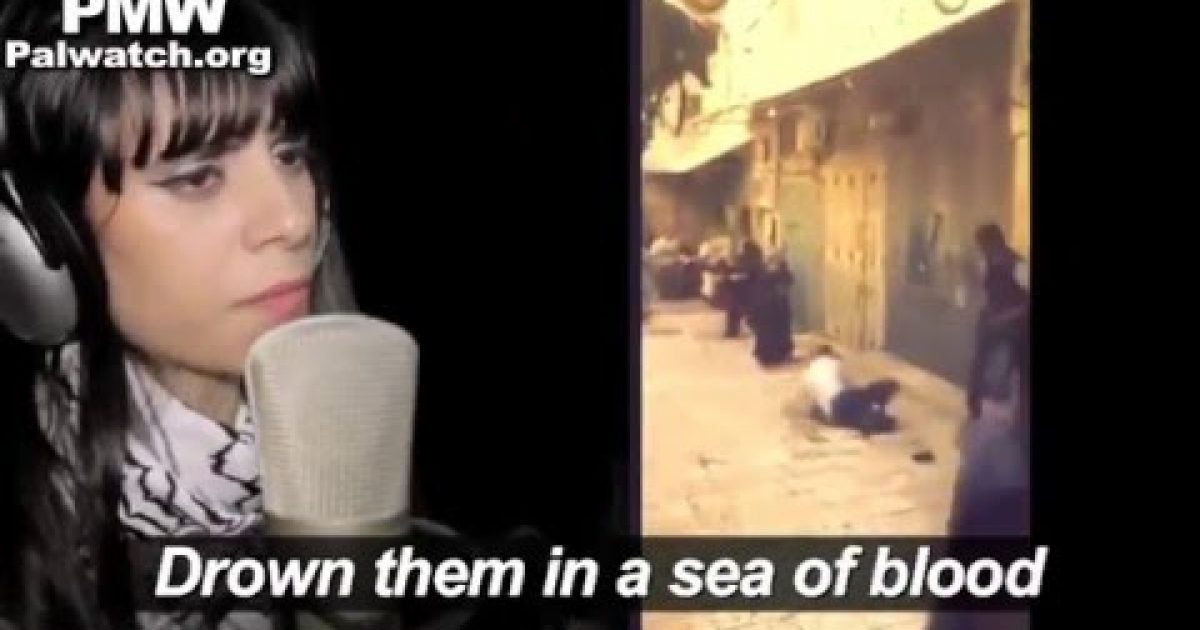 Facebook Twitter Flipboard
Fatah is the supposedly moderate Palestinian Party, run by the supposedly moderate Palestinian president Abbas.  Awdah TV a network controlled by this supposedly moderate party regularly runs programming  designed to incite their viewers to hate and kill Israelis.
This latest example is a music video calling for Palestinians to murder Israelis all over Israel – “in all their neighborhoods,” to “drown them in a sea of blood, kill them as you wish.”
This type of programming  feeds the current wave of terror which has seen many attacks against Israelis all across the country. And this is a music video created for the “moderate” Palestinians. Abbas’ Fatah party doesn’t really seem like they care about making peace.
The following are the lyrics of this sick song, and the music video itself (with subtitles). The translation was done by Palestinian Media Watch.

Visuals show Fatah supporters and masked men with weapons
“Pick up your weapon and advance, Jerusalem is calling in pain
Come on, strike them, you have the strength
Turn your anger into the fire of Hell…
Besiege them in all their neighborhoods”
Visuals show a Jewish man wearing a prayer shawl running down a street in the Old City of Jerusalem and then being knocked over and beaten by young Arabs
“Drown them in a sea of blood
Kill them as you wish”
Visuals show a photo of 18-month-old Ali Dawabsheh, who was murdered together with his mother and father in an arson attack on his family’s home by Jewish extremists
“The one who burned the [Dawabshe] baby is the most oppressive…”
Visual shows a picture of terrorist murderer Muhannad Halabi
“Muhannad [Halabi] (i.e., murderer of 2) did not agree to be humiliated
and made them drink the bitter cup…
Advance to the battlefield and resist
Challenge death and resist”
Visuals show masked men shooting weapons toward the sky
“Victory is undoubtedly coming to us
Those who don’t understand will understand…”
Visual shows a picture of terrorist stabber Fadi Alloun
“Fadi Alloun (i.e., terrorist who stabbed one) has joined the great Martyrs”