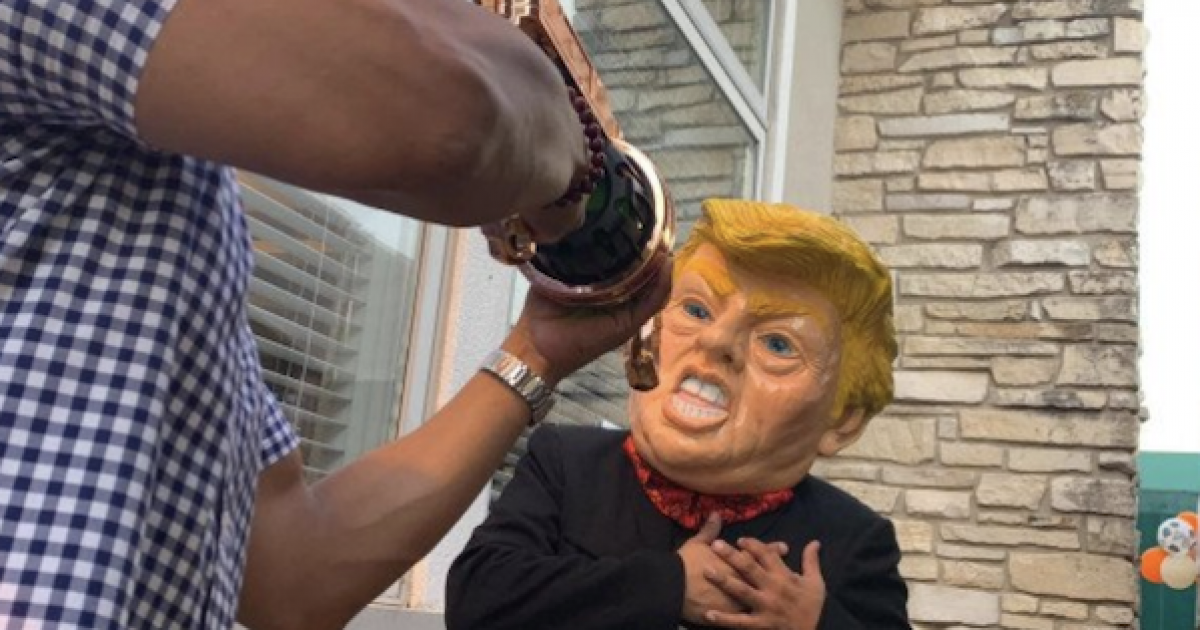 What is it with Democrats and violence? The latest disgusting act acting out in front of guests A Democratic state senator from Illinois Martin Sandoval, came under fire over the weekend after pictures were posted online showing his supporters at a fundraising event performing a mock assassination of President Trump. And then the idiot even posted the pictures.

As Twitchy pointed out, this incident is much worse than the Rodeo clown who mocked Obama and got fired?

CBS affiliate WCIA-TV in Champaign reported the fundraiser happened in west suburban Winfield, and a woman at the event posted the photos to her Facebook page while tagging Sandoval in them

In one of the pictures, a person can be seen pointing a fake machine gun at a man wearing a Trump mask and Mexican costume. The individual appears to simulate being shot — grabbing his chest and leaning back. In another photo, Sandoval can be seen standing next to the person holding the gun. In other words, he was showing his approval.

“As our nation grapples with the epidemic of gun violence, purposely pointing a fake gun at anyone is insensitive and wrong,” Pritzker said Saturday night. “I condemn actions like the ones displayed in the pictures because they lack the civility our politics demands.”

“The tragedies in El Paso and Gilroy have demonstrated how hate-filled political rhetoric can fuel violence,” Maura Possley, a spokesperson for the Democratic Party of Illinois, said. “These images are unacceptable and dangerous. The place to make our voices heard against Trump is at the ballot box.”

Sandoval, a powerful state lawmaker who chairs the Senate Transportation Committee and was a driving force behind the recent gas tax increase to fund the ‘Rebuild Illinois’ capital plan, issued an apology in an emailed statement.

“The incident that took place is unacceptable,” he said. “I don’t condone violence toward the President or anyone else. I apologize that something like this happened at my event.”

But isn’t that apology a bit too little too late. He was there Friday night when it happened but only complained about it on Sunday after the got push-back from the Governor.  Illinois Republican Party Chairman Tim Schneider agrees:

“Dangerous imagery like this will be condemned and seen as inappropriate by people of sound mind; however, a mentally unstable individual who wants to harm President Trump might find them as an inspiration,” Schneider added. “It’s inexcusable for an elected official to allow the promotion of violence in any way. If the individual pictured is a staffer or volunteer, they should be terminated immediately.”