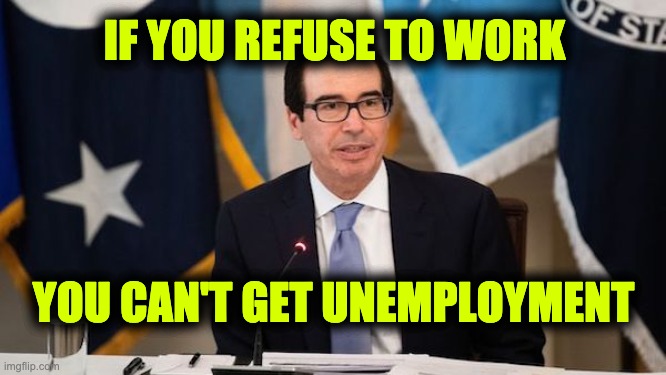 Treasury Secretary Steven Mnuchin warned individuals who are offered their jobs back after being laid off due to the coronavirus crisis but refuse to return, will not be eligible for unemployment benefits.

Mnuchin referenced the Payroll Protection Program (PPP) which has allowed some employers to invite workers back into the fold.

“If you offer a person a job … and that person does not take the job … then that person would not be allowed to get unemployment,” Mnuchin said.

The Wall Street Journal reported last month that under the CARES Act, a stimulus package passed in March, a significant portion of Americans can earn more with jobless benefits than they did while working.

Republican senators warned last month that the boost in benefits during the pandemic would raise the unemployment rate because workers could, for months, draw a higher check from the government than they could from their employer.

“I want to [help] people whole who lost their job through no fault of their own,” Senator Lindsey Graham (R-SC) said. “But I don’t want to pay people more not to work than to actually go to work.”

Graham went on to explain that “some people’s wages could actually be temporarily increased by 150 percent by leaving the workforce” something he described as “a perverse incentive which needs to be fixed.”

As currently structured, those benefits are only scheduled to last until the end of July. Meaning the government handouts will – to the point where they outweigh the need to work – end soon.

Sen. Lindsey Graham: "Under this proposal that they agreed to last night, on unemployment you would be making $24.07 an hour in South Carolina. There are a lot of jobs in South Carolina that do not pay $24.07… This bill pays you more not to work than if you were working." pic.twitter.com/7OgUzYzPFJ

“When we talk about this idea of reopening society you know, only in America – does the president –  when the president tweets about liberation – does he mean go back to work,” she lamented during a Vice TV talk show.

“When we have this discussion about going back or reopening, I think a lot people should just say ‘no’- we’re not going back to that,” AOC suggested.

.@AOC is calling for a National Work Boycott after Coronavirus is over.

“When we have this discussion about going back or re-opening, I think a lot people should just say ‘no’… we’re not going back to that.”

People WANT to go back to work.

She is so out of touch. pic.twitter.com/QAalkAxzIz

Fortunately, as opposed to AOC’s socialist utopia, a vast majority of Americans actually want to work, want to help feed their families, and generally want to make a better life for them.