MIT Study Shows Same Risk Indoors For COVID At 6 ft And 60 ft: Will The ‘Experts’ Accept THIS Science?

The CDC Has Become the CYA 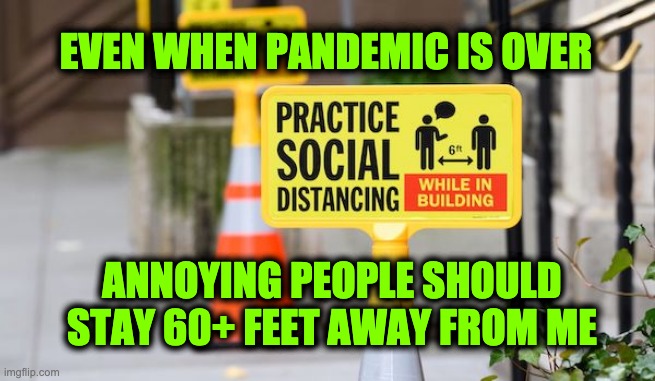 “Our analysis shows that many spaces may be safe to re-open at full occupancy, while others carry significant risk,” MIT Professor Martin Bazant, who conducted the study alongside Professor John Bush, “depending on the amount of time people spend together, the ventilation rate, whether face masks are worn and other factors.”

The peer-reviewed study, published in Proceedings of the National Academy of Science of the United States of America, focused on factors such as time spent indoors, air filtration and

“I think if you run the numbers, even right now for many types of spaces, you’d find that there is not a need for occupancy restrictions,” he told CBNC.

The study says that “social distancing” guidelines that have been used around the world for the past year are essentially pointless.

People have become obsessed with maintaining “social distancing,” Over the past year, we’ve seen some really crazy things that people have done to enforce it. From the one-way sidewalks in Massachusetts to the New York mayor’s failed snitch line to enforcement by drones, officials went crazy to make sure that there was a minimum of 6 feet between you and another person. Sometimes it wasn’t just officials that were enforcing the rules — fearful people were so upset about people not standing on the little marked outline, there have been brawls in stores.

Social distancing was also used as an excuse by liberal governors to ban religious gatherings and freedom.

It was just last month that the CDC announced that schools could drop the 6 feet of social distancing in classrooms because kids were safe at 3 feet.

We covered that one here: Three Feet Or Six Feet? Social Distancing Guidelines Are Being Scrutinized

Here’s the thing about “science” — it can change with new information.

After a year of this virus spread over the entire world, there’s a lot more that we know about it now than we did in January 2020 when it was first detected in the United States.

For instance, it isn’t primarily spread through touching contaminated surfaces, and it does travel through the air.

Two professors at the Massachusetts Institute of Technology conducted a study that challenged the “social distancing” guidelines that have been accepted worldwide.

Professor Martin Z. Bazant teaches Chemical Engineering and Applied Mathematics, and John W.M. Bush teaches Applied Mathematics. They have developed a method of calculating the risk of exposure to COVID in an indoor setting that considers various factors that could affect transmission. They considered “time spent inside, air filtration and circulation, immunization, variant strains, mask use, and even respiratory activity such as breathing, eating, speaking or singing.”

The study has been through three “heavy” rounds of peer review, and Bazant says that is the most rigorous peer review process he’s ever been through.

Bazant and Bush question long-held Covid-19 guidelines from the Centers for Disease Control and Prevention and the World Health Organization in a peer-reviewed study published earlier this week in Proceedings of the National Academy of Science of the United States of America.

“We argue there really isn’t much of a benefit to the 6-foot rule, especially when people are wearing masks,” Bazant said in an interview. “It really has no physical basis because the air a person is breathing while wearing a mask tends to rise and comes down elsewhere in the room so you’re more exposed to the average background than you are to a person at a distance.”

Bazant said that the CDC and the WHO overlooked the amount of time people spent indoors — the longer someone is indoors with a person infected with COVID, the greater the likelihood of transmission. It seems like common sense, right?

The study also shows that keeping the air moving could be just as effective or even more effective than a new, expensive filtration system.

Bazant also pushed back on the “flawed” policies of indoor occupancy caps because they don’t make much sense. He says 20 people indoors for 1 minute is probably fine, but the same group indoors for several hours could be a problem.

He says that many places that have been shut down don’t need to be and that they could open up to full capacity.

“What our analysis continues to show is that many spaces that have been shut down in fact don’t need to be. Often times the space is large enough, the ventilation is good enough, the amount of time people spend together is such that those spaces can be safely operated even at full capacity and the scientific support for reduced capacity in those spaces is really not very good,” Bazant said. “I think if you run the numbers, even right now for many types of spaces you’d find that there is not a need for occupancy restrictions.”

Six-feet social distancing rules that inadvertently result in closed businesses and schools are “just not reasonable,” according to Bazant.

“This emphasis on distancing has been really misplaced from the very beginning. The CDC or WHO have never really provided justification for it, they’ve just said this is what you must do and the only justification I’m aware of, is based on studies of coughs and sneezes, where they look at the largest particles that might sediment onto the floor and even then it’s very approximate, you can certainly have longer or shorter range, large droplets,” Bazant said.

“The distancing isn’t helping you that much and it’s also giving you a false sense of security because you’re as safe at 6 feet as you are at 60 feet if you’re indoors. Everyone in that space is at roughly the same risk, actually,” he noted.

The primary driver of infection is not large droplets since so many people are wearing masks, but the virus continues to spread. We now know — and the CDC tacitly admitted — that the virus is airborne.

“If you look at the air flow outside, the infected air would be swept away and very unlikely to cause transmission. There are very few recorded instances of outdoor transmission.” he said. “Crowded spaces outdoor could be an issue, but if people are keeping a reasonable distance of like 3 feet outside, I feel pretty comfortable with that even without masks frankly.”

Bazant says this could possibly explain why there haven’t been spikes in transmission in states like Texas or Florida that have reopened businesses without capacity limits.

The study also addressed the variant strains that are said to be 60% more transmissible by suggesting increasing ventilation by 60%, reducing time, or the number of people indoors could offset that risk.

As for the end of indoor mask mandates, Bazant says that the study’s guidelines can help quantify the risk involved. He says that measuring the amount of carbon dioxide in a room can help quantify how much potentially infected air is present and, therefore, the risk of transmission.

We’ll just have to see if Bazant and Bush’s research will aid in crafting public policy in the future.

Here is Dr. Scott Gottlieb on CNBC’s Squawk Box talking about the CDC’s changing goalposts in March of this year, reducing the “social distancing” requirement in schools to 3 feet. To her credit, Becky Quick mentions that politicians use CDC guidelines as a shield when crafting public policy.