“Frustration Is At An All-Time High, And Biden Can’t Go To Georgia Or Any Other Black State In The South And Say, ‘This Is What We Delivered In 2021.’ ” 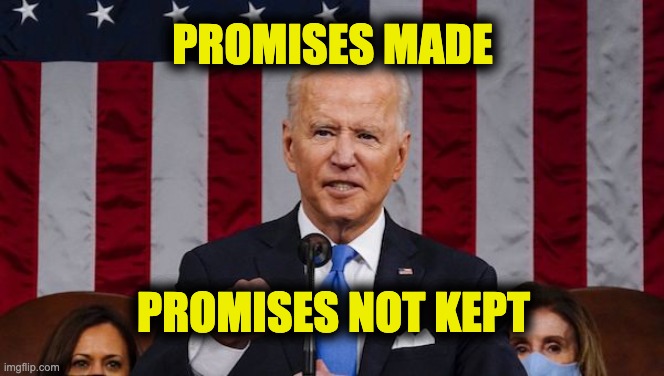 Remember the phrase used by the Trump supporters, “promises made, promises kept?”  That popular phrase can’t be used in the Biden administration and his supporters who are people of color are very frustrated that his promises aren’t being kept.

Joe Biden’s approval ratings are at historic lows, but it’s not just conservatives and independents who are unhappy with his job performance, the Washington Post now reports that Biden’s core supporters, many of them Black and other minorities, are “dismayed, disappointed, and frustrated,” with the president’s inability to deliver on his campaign promises.

The Post profiled a number of his supports in Georgia where the Post noted, “the discontent is particularly visible in Georgia, where Democrats had hoped demographic changes and mobilization efforts would offer a blueprint for expanding their electoral map.”

“W. Mondale Robinson spent a large chunk of last fall in clubs and bars and concert venues in Georgia, trying to convince disenchanted Black men that casting a ballot — in the 2020 general election, then the Georgia runoffs for the U.S. Senate — could finally mean real change in their communities.

“But Robinson, founder of the Black Male Voter Project, thinks the case would be a lot harder to make now. He remembers the exact moment his optimism that President Biden would be different began to fade: when Democrats in May said they were willing to significantly weaken a policing-reform bill to get Republican support.

“More disappointments followed. Robinson was dismayed that Biden did not push for changes to the filibuster to enact a $15 minimum wage. He was upset that the president did not try to halt a raft of voting restrictions passed by Georgia’s GOP-led legislature.

“I think the frustration is at an all-time high, and Biden can’t go to Georgia or any other Black state in the South and say, ‘This is what we delivered in 2021,’ ” said Robinson, whose group believes it reached 1.2 million Black men in Georgia. “Black men are pissed off about the nothingness that has happened. . . . Does it make the work harder? It makes the work damn near impossible.”

A Washington Post average of polls since the start of September suggests support for Biden has sunk notably among key Democratic constituencies — Blacks, Latinos, women, and young people. Pew Research Center polls found Biden’s approval rating among Black Americans fell from 85 percent in July to 67 percent in September, while also falling 16 points among Hispanics and 14 points among Asians.

The Post found that Black and other minority voters who helped fuel Biden’s victory now see what they consider unfulfilled promises and dwindling hope for meaningful change.

According to the Post, Democrat activists are worried this could mean big trouble in next year’s mid-term elections.

“If midterms are about enthusiasm and turnout, who do you think is excited to vote on November 2 at this moment?” asked Nsé Ufot, chief executive of the New Georgia Project, which has registered more than a half-million voters. “Because it ain’t Democrats. It ain’t Black folks. It ain’t young people,” he told the Washington Post. Adelina Nicholls, who leads the Georgia Latino Alliance for Human Rights, told the Washington Post her group knocked on “every Latino door in Georgia” before the 2020 election — but now she is dismayed by the lack of help she says Biden has given to immigrants.

“The concern that we have is that the Democratic Party, they keep repeating the same mistakes,” Nicholls said. “We worked for something here. Let’s try something new. Let’s be different. What good is a politician that doesn’t work for the benefit of the community that elected him?”

Helen Butler, a longtime voting rights activist and the executive director of the Georgia Coalition for the People’s Agenda, told the Washington Post she is “dispirited by the administration’s insistence that there is no way around the filibuster — and by how it has prioritized an infrastructure bill as voting rights are being stripped away in Georgia.”

While it is common for presidents to lose support across the board after a honeymoon following a presidential inauguration, Richard Manning, President of Americans for Limited Government, believes something else is going on with Biden’s poll numbers.

“We have never seen a president fail on such a scale as Joe Biden has,” explained Manning. “From his open-border policies to his weaponization of the FBI to go after parents at school board meetings, to his inflationary spending, and his job-killing and dangerous energy policies, everything he does is a disaster.

“I’m not surprised that many of his core supporters are disappointed in him. After all, they buy groceries, put gas in their cars, and attend school board meetings just like everyone else.

“Under Donald Trump, minorities and low-wage earners saw the biggest gains in the labor market,” Manning added. “Those are the policies we need to return to. We need leaders in Washington who will focus on what we used to call the ‘kitchen table’ issues, those things that every family discusses around the kitchen table.

“Instead, Biden has focused on imposing a radical Marxist agenda that has alienated independent and conservative voters.  Now his base is realizing that when it comes to their real core issues that affect their family, Joe Biden is all hat and no cattle.”