Heh! Mini AOC Is Back To Explain The Green New Deal 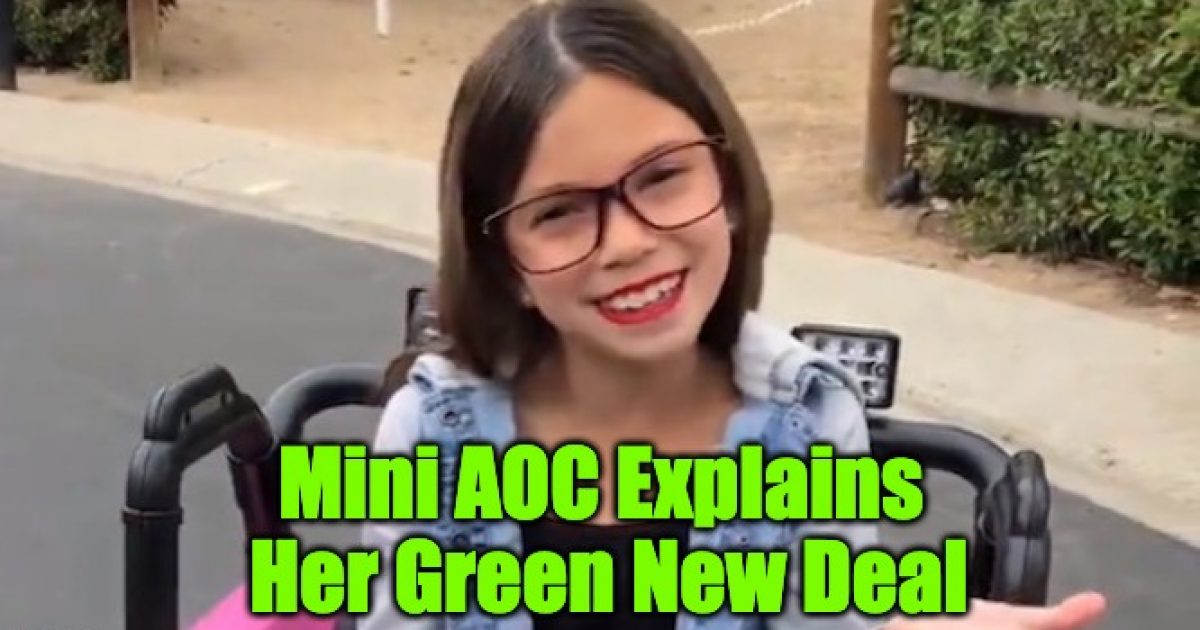 “Like, hello America, AOC here again,” she said in her new video. “But this time from Washington, D.C., which is named after our first president — George Washington D.C.”

“Like, I want to tell you about my plan to single-handedly save the planet. I call it the Green New Deal. I picked green because I’m still learning my colors. I came up with my plan after we were watching, like, the most important documentary on climate change. It’s called Ice Age 2: The Meltdown,” she said.  “That’s not me saying it, that’s science.”

“My Green New Deal will cost, like, 93 trillion dollars. Do you know how much that is? Me neither. Because it’s totally worth it. If sea levels keep rising, we won’t be able to drive to Hawaii anymore,” she added.

“I just got this electric car,” she explained while sitting inside a pink electric mini-car. “It’s eco-friendly, and everyone has to drive one under my deal. And that’s why I bought one for my boyfriend, too, using campaign donations. Well, you bought it for him.”

A young boy drives up, and she told him not to say anything. “I do the same thing to Pelosi and Schumer,” she said.

As the young boy drives away dejected, the viewer can see a sign on the back of his car that reads, “Free @RealJamesWoods.”

As long as Ava #miniAOCofficial enjoys doing these videos she will continue to keep making them and as long as #AlexandriaOcasioCortez keeps being #AOC we will have plenty of material to keep making them as well. Thanks again to everyone who had kind things to say about Ava. pic.twitter.com/Je7YojRoXd

Now, THIS is funny:

Yes, an eight-year-old has better sense than the bartender! The #FreeJamesWoods sign was extra special!!! ? Great job!! ?#AOCIsAnIdiot #MAGA ?? pic.twitter.com/tp5lbZUqbV

The little girl is way better than the grown up version. Hilarious too!!

Jimmy should have Mini AOC on his show.

Best thing on Twitter! I wonder how long before it gets pulled for being an #aoc #parody account.

Good question, probably not too long.

…we won’t be able to drive to Hawaii anymore! Hilarious. Thank you!

Thanks for sharing Caria, and I am sure glad you aren’t sitting on one of my office chairs.