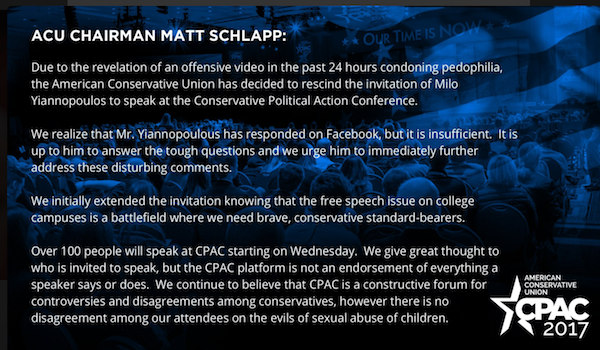 As soon as it was announced the selection of Milo Yiannopoulos as CPAC Saturday Night Keynote speaker was very controversial due to his Alt. Right connections and his self-admitted lack of conservative credentials. Through it all the head of the ACU Matt Schlapp stood firm explaining that the reaction Milo received when he was supposed to speak at Berkley was similar to what many conservatives face when they try to speak.

But on Sunday night videos began to surface seemingly showing Milo supporting pedophilia and pedophiles (one example is blow) Free speech is one thing, supporting crimes against children is another. Even if Milo joking and simply doing his “schtick” there are certain things that are not funny.

Matt Schlapp, head of the American Conservative Union which runs CPAC announced at about 1:15 on Monday afternoon that they have rescinded Milo’s invitation to speak:

Due to the revelation of an offensive video in the past 24 hours condoning pedophilia, the American Conservative Union has decided to rescind the invitation of Milo Yiannopoulos to speak at the Conservative Political Action Conference.

We realize that Mr. Yiannopoulos has responded on Facebook, but it is insufficient.  It is up to him to answer the tough questions and we urge him to immediately further address these disturbing comments.

We initially extended the invitation knowing that the free speech issue on college campuses is a battlefield where we need brave, conservative standard-bearers.

Over 100 people will speak at CPAC starting on Wednesday.  We give great thought to who is invited to speak, but the CPAC platform is not an endorsement of everything a speaker says or does.  We continue to believe that CPAC is a constructive forum for controversies and disagreements among conservatives, however there is no disagreement among our attendees on the evils of sexual abuse of children.

Much harder than making an initial decision to invite an extremely controversial speaker is making a public announcement that you changed your mind. Matt Schlapp made the right call today and for the right reason, not to stifle political views that may differ with his, but ensure that the ACU is not seen as supporting child abuse.

And speaking as one conservative who would have attended CPAC either way,  I’m extra proud to be driving down to DC tomorrow! Especially because Schlapp’s OTHER big announcement. 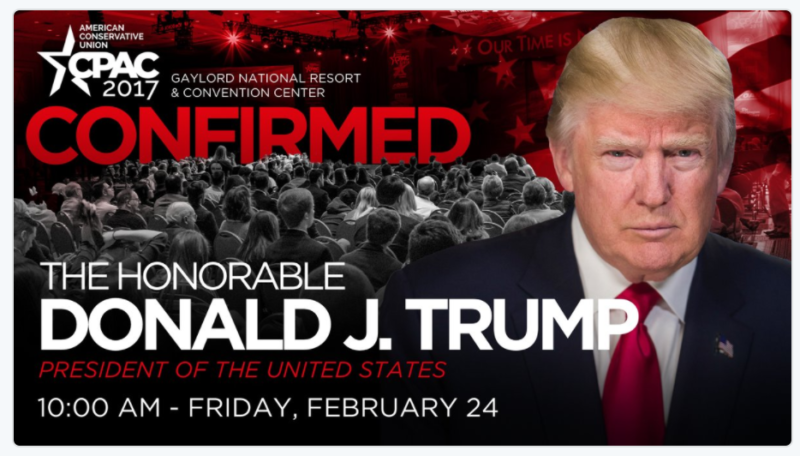 Below is one of the videos that caused Milo’s invite to be rescinded.