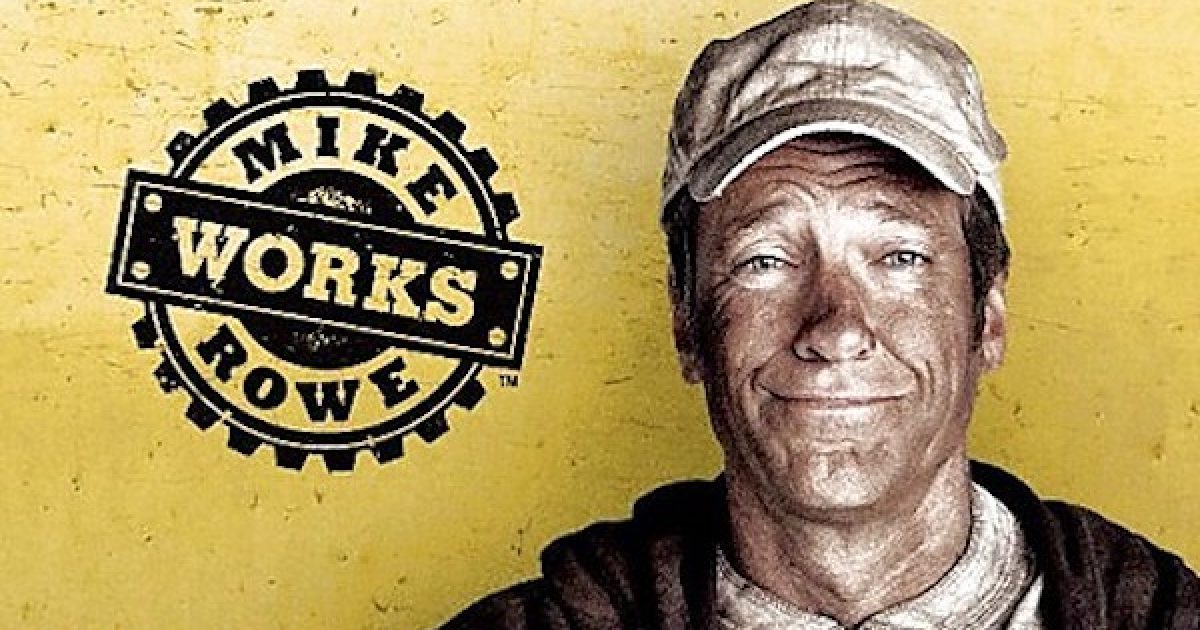 Anyone who has been paying attention to the things that Mike Rowe (the current star of the Facebook series Returning the Favor, and former host of Discovery Channel’s Dirty Jobs) has been saying for the last decade or so, knows that Rowe has been a longtime advocate of skilled labor in America.

When Rowe began, his effort seemed Quixotic, as he was fighting against a Higher Education system that was growing ever larger and more powerful. However, at the same time that Rowe was preaching a return to skilled labor as the foundation of our jobs market, Higher Education was failing thousands upon thousands of Americans. People were (and are) graduating from college with useless degrees that fail to earn them a job, meanwhile, the skilled labor force continues to experience a shortage of workers for well-paying jobs (think carpenters, plumbers, electricians, etc). Today, Rowe looks like a prophet who should have been listened to far sooner and many Americans are finally beginning to recalibrate their beliefs about education and work to fit in with a reality-based future. (For Heaven’s sake parents – don’t let your kids spend $100K to earn a degree in lesbian poetry from the 15th century. That degree will leave them unemployed and living in your basement!)

Rowe’s philosophy has long been offensive to a certain class of Americans who believe that anyone who doesn’t go to college, or who does manual labor for a living, is somehow “less-than.” Earlier this week, Rowe posted an article from NPR that basically affirmed everything he’d been saying for the last decade.

One of his followers praised him for his prescience and Rowe kindly answered back, from his Facebook page:

Mike – Is it satisfying to see that every single thing in this article is PRECISELY what you’ve been saying for the last ten years, or is it annoying to see that mikeroweWORKS isn’t even mentioned?

The short answer, is yes. It’s always gratifying when large news organizations support my foundations agenda – especially with an article this good – but if I’m being honest, I would have liked to been asked for a quote. Not because I like to see my name in print, but because I could have told their readers we’re accepting applications for the next round of Work Ethic Scholarships. I could have said something like…

“Well thanks, NPR, that’s an excellent question. In my view, the widening skills gap and the increasing cost of college aren’t problems, in and of themselves; they’re symptoms – symptoms of our insistence on promoting one form of education at the expense of all the others. This lopsided, cookie-cutter approach to learning has led to a mountain of myths and misperceptions that discourage millions of people from exploring many viable opportunities that don’t require an expensive four-year degree. To close the skills gap, we need to affirmatively debunk the misinformation surrounding these opportunities, and stop treating whole categories of jobs like vocational consolation prizes. Toward that end, mikeroweWORKS is accepting applications for another round of Work Ethic Scholarships, specifically designed for people who wish to learn a skill that’s actually in demand. And your readers are welcome to apply at mikeroweWORKS.org/scholarship.”

The following day, a sad liberal who just can’t understand why people think that a good work ethic can lead to success, wrote in to condemn Rowe for being right and exposing her worldview for the foolishness that it is.

Yesterday, I posted an article that dared to question the universal wisdom of pushing everyone toward a four-year degree. The article reached 3 million people, and not everyone was pleased…

Dawn Baker wrote, “Is it your intent to make those who choose college to feel ashamed, lazy and brainwashed? Our country’s education system is under attack, and you seem to be supplying more ammunition to those attacking it……There’s a reason many of these jobs pay well – they are truly HARD WORK – physically hard. Dangerous hard. Mentally hard. Feel free to send reps to the local unemployment office and brow beat them to send people to these jobs. Whether you mean to or not – your are sending a very bad message to those who want to destroy our higher education system.”

What a foolish and completely illogical train of thought.

Anyone, who has ever read or heard Rowe’s thoughts on the subject knows that he’s not attacking education, but simply being realistic. College is NOT for everyone. Some college degrees are utterly useless in the real world. We are suffering through a drought in the skilled labor force. Some skilled labor jobs pay far better than many jobs where a college degree is required. These are facts, not “attacks” on higher education.

You’re right – our countries educational system is indeed under attack. But the attack is from within, and the wounds are self-inflicted.

Yesterday, they installed a “Cry Closet” at The University of Utah, where students feeling stressed-out over finals can clutch a stuffed animal and bawl their eyes out in private. https://bzfd.it/2HYu7pB. Last week, Ranga Jarrar, a professor at Fresno State, called Barbara Bush a witch and a racist the day she died, then bragged to the world that her tenured position meant that she could speak without fear of consequence. https://dpo.st/2vTSrUI. Meanwhile, Berkley just banned another speaker with views and ideas their students find “objectionable.” Or was it Yale? Hell, who can keep track anymore?

Point is, Dawn, the hypocrisy in our educational system is rank, the bias undeniable, the disrespect for our flag ubiquitous, and the entire “safe space” mentality the exact opposite of what life is like in the real world. Higher education has created its own PR nightmare. Is it any wonder parents are trying to figure out if their kids should be sent into such a lopsided environment? Is it any wonder reasonable people are beginning to question the value of a four-year degree?

Tuition has increased at two and half times the rate of inflation. Nothing else this important has ever done that. Not real estate, energy, food, even healthcare. The question is why? Is the quality of education two and half times better than it was thirty years ago? No way. Are universities turning out more graduates? Hardly. Fifty percent of those who enroll don’t even graduate. Do people have more disposable income today than they used to? Of course not.

No, universities have been able to raise their prices partly because too many parents believe that anything less than a four-year degree will doom their kid to a less productive existence, and partly because we’ve pressured millions of kids to borrow whatever it takes from a bottomless pool of unlimited money that doesn’t really exist. The result? One and a half trillion dollars of student debt, 6.3 million jobs that no one wants to do, and millions of college graduates who can’t find work in their chosen fields – but lack the skill to do the kind of jobs currently available. The kind of jobs you deem, “hard work.”

To answer your question, Dawn, no – my intent is not to make those who choose college feel “ashamed, lazy or brainwashed.” My intent is to remind people that a university is not the only place to enrich your mind or prepare yourself for the real world. Nor is it necessarily the best place. It’s merely the most expensive. Other options exist, including those offered through my scholarship fund. Please feel free to apply, should your position at Oregon University ever vanish. Or, should you one day conclude that work is not the enemy. Mikeroweworks.org/scholarship.

PS. This is a short but excellent video from a graduate of Haverford College, who sums it up better that I. Enjoy!